Franciscan Father John Ruffo is no stranger to change 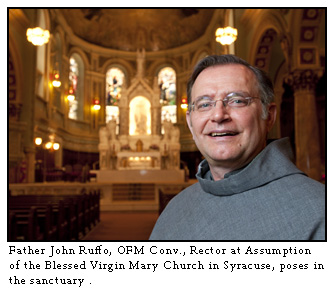 After splitting his first 18 years of ministry as a Franciscan between Montreal and Toronto, Father John’s career in the Conventual order has taken him to various and diverse locales along the East Coast. A native of Johnson City whose home parish is St. James Church, Father John has been on the move almost constantly. From 1992 to 1993, he studied at the Jesuit School of Applied Theology in Berkley, Calif. He then moved from Binghamton to North Carolina to Florida to Philadelphia and, finally, back to the Syracuse Diocese. While in North Carolina, Father John ministered at three different parishes, as well as serving as the chaplain at Elon University.

Father John said that throughout his ministry he has made an effort to adapt to and welcome each situation as it transpires. First and foremost, he said, he is simply responding to God’s call.

“I’m always very flexible and I always believe that I am where I am because that’s where God wants me to be,” Father John said. “Why I don’t always know, but I feel there is some purpose for me being in this particular place at this particular time.”

Father John entered the minor seminary in 1961 while in high school.

“I always tell people I’m a true product of the system because I started so young,” he said.

A lifelong parishioner at St. James, he initially encountered the friars during a career day event at St. James School. While other students reacted to the attorneys, doctors and police officers who offered presentations, the young Father John was impressed by the life offered by the Franciscan priesthood. He held onto the materials the friar provided to the class and, one year later, made initial inquiries into joining the order.
Throughout his young life, Father John had been an altar boy and he also sang in St. James Church’s choir. He said that he “was in awe of the priests at St. James.” Outside of the parish, Father John was a member of a Vocation Club led by a Franciscan friar from Ss. Cyril and Methodius Church in Binghamton.

Although he had grown up in a diocesan parish, Father John said he was attracted to the Franciscan order because of the example provided by its founder St. Francis. In addition, he found the idea of living in community with other friars appealing.

Although he has served in a variety of capacities ranging from formation for ministry to campus ministry wherever the order has asked him to be, Father John noted that the Franciscan communities have provided a constant.

“You’re getting support from other men in the same boat so to speak. Other men dealing with their own vocation – they’re men dealing with the problems of life as you are,” Father John said. “When you’re living in community, you’re always coming home to at least two or three friars who are also in ministry and you can laugh and chat, commiserate, whatever. And you’ve got that support. You’re praying together every day, you’re eating together, you may or may not be doing ministry together, you’re finishing your day together in recreation possibly. So it’s nice to have that community support instead of being a lone ranger by yourself.”

The community around Assumption Church has taken on a leadership role on Syracuse’s troubled north side. Once one of the safer areas of the Salt City, the north side now struggles with the highest rate of violent crime in the community.

“Likewise, Assumption Church is experiencing its own hardships, like all of Syracuse’s north side parishes,” Father John said.

In the near future, Father John hopes that more Catholics in Central New York will take advantage of what Assumption Church has to offer including what he considers a beautiful environment for Mass and prayer and its upcoming concert series.

“Certainly we wish more people would come to Assumption, it’s the most beautiful church in the city of Syracuse and I’m surprised at the number of Catholics that I meet who’ve never been inside of this magnificent church. It really is a jewel of the diocese,” he said.