Father Keeffe’s legacy: all for the refugees 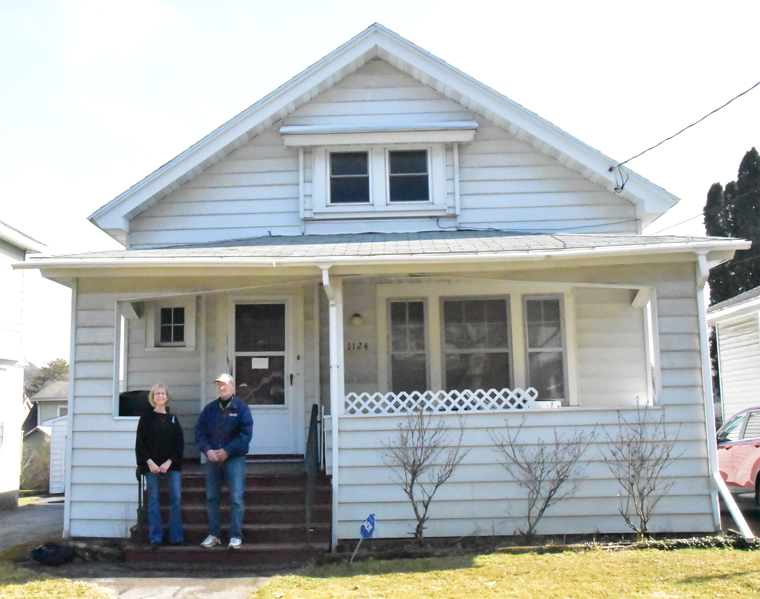 The house with “good bones” now fills out with a refugee family.

Father Anthony Keeffe, who died last year, bequeathed his family home to All Saints Parish to support the refugee community from the Democratic Republic of Congo (DRC). Then a couple “felt compelled to do something” and donated $50,000 to fix up the house at 1124 Oak St. in Syracuse.

“It was like dew from heaven,” Father Frederick Daley, pastor of All Saints, said of the money from the couple, who prefer anonymity. He added: “I just was so touched with their … overwhelming generosity. … They could have certainly used that money themselves, for their family, and they were ready to sacrifice all that to help others—new Americans. … And I think, what a spirit that is and in the midst of our political divides and things to just see people that just want to walk the walk.”

The aim is for Justin (pronounced Jhus-TAN) Ndayambaje, 22, and his family to move into the house by May 1. “It’s a good house,” Justin said. “It’s really a good house. It has enough room … warm, the heater working … and it will be good for my parents and us too.”

“It’s got good, good bones, and then once the family can move in, then we’ll continue to offer our service to do smaller upgrades from there,” said Laurel Flanagan, CEO of Operation Northern Comfort, the volunteer nondenominational agency that is rehabilitating the Northside house as part of its mission to help people in need.

Up to 200 Congolese refugees are parishioners at All Saints. Father Keeffe’s mother and father were German and Irish immigrants, said Father Daley, “and so he was excited about having the house go to a NEW generation of Americans. … His whole priesthood he was committed to the poor and worked hard to help the poor, and so this just sort of flows his legacy.”

Justin said his father, Segahire Francois, and mother, Justine Njagari, were born in the DRC and both speak the Kinyarwanda language. The family moved to the Kiziba Refugee Camp in Rwanda when Justin was a tyke. “It is a camp of more than 20,000 people,” he said. His family lived in tents in the beginning, and his primary-school classes were taught in French until the language switched to English in the seventh grade.

He remembers waiting to get food—a tough living situation compared to here. Even then he was a singer and choir director who went to church every Sunday. The family was selected to move to the United States in 2014, and the date of arrival was Sept. 26, 2017 (a “process, process, process”). “I can’t forget it,” he said.

Most of his relatives, including his uncle, remain back home in the refugee camp. “I know how they’re suffering,” he said. “I experienced the same life. I feel it.” Asked if there is any hope they can come to America, he said, “All of them there, they want to come.”

His family is Catholic, and he remembers meeting Father Daley; Cherie Cogan, a member of the All Saints Refugee Welcoming Task Force; and other people at the airport. “We had no idea about how life is like in America,” the soft-spoken Justin said inside the three-room Northside home where his family lives temporarily. He obliged a visitor by playing a pretty tune on the piano in the living room. His English is fine, and he also speaks Kinyarwanda (fluent), Swahili (medium) and French (a little). His brother, Bienvenu Mbuguje, speaks several languages too. Justin’s niece Chantal Zaninka also lives with the family.

Both of Justin’s parents have medical issues. His brother works at a factory in Liverpool. Justin worked for one year in a Solvay factory. He earned an associate’s degree from Onondaga Community College and works as an EEG technician at Upstate University Hospital (“I like it, I love it, I enjoy it”). The people from All Saints Church, where he sings in the Congolese choir, “really helped me a lot to continue my education,” he said.

Just as the pope says

And he appreciates the people who are helping his family move to Father Keeffe’s former house. The husband and wife who donated the $50,000 to revitalize it are in their early 60s and fairly new to All Saints, which they view as a compassionate and welcoming parish.

“Pope Francis is always talking about using our resources and whatever to help those most in need and this is a good example,” Father Daley said. 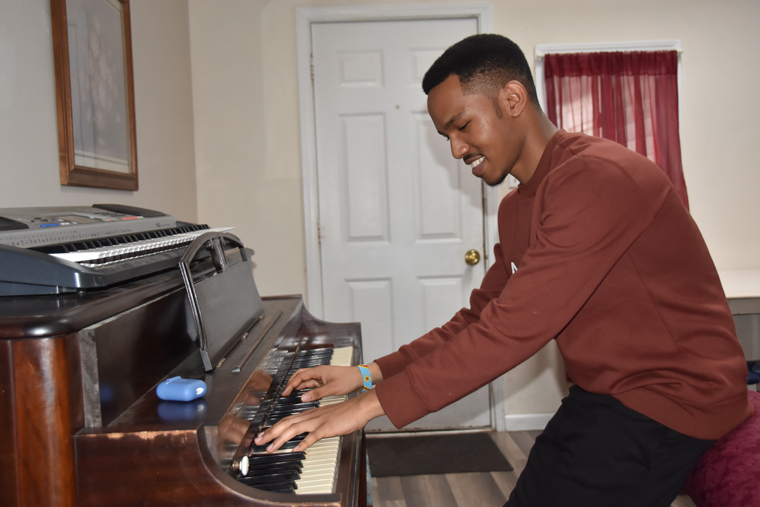 Justin Ndayambaje plays the piano in the Syracuse home that his family is living in temporarily. He appreciates everyone who is helping his family move to their new home. (Sun photo | Tom Maguire)

“The work of Northern Comfort is wonderful; we’re so happy that we can help support their efforts in fixing up this house,” said the freelance artist whose wife received an inheritance from her father that allowed the couple to donate the $50,000.

“We’re not saints,” said the wife, who worked for the Syracuse City School District for 20 years. “The amount that we are able to invest in this project, it hasn’t changed our life. And we were happy with our life the way it was. It’s not like we needed anything more, or anything different. And we were blessed …, we’ve always had a nice place to live growing up and as a couple and as a family, and there are just so many people that don’t have that experience. And they should be able to have that experience.”

Cogan, of the All Saints Refugee Welcoming Task Force, said the parish wanted to “walk the walk” with Justin’s family and “became very connected to the family.”

Norm Andrzejewski is the CEO emeritus of Operation Northern Comfort and currently a board member and volunteer. He said of Father Keeffe: “You couldn’t help but be touched by this guy. He was the closest person I’ve ever met to Christ. He had a sense of humor. He was gentle. He was very kind. And he valued the things that I think we ought to value; I never saw him get flustered. Never.”

Father Keeffe died of complications of COVID-19 but had a lot of underlying health problems too. ​​He was a priest for the Diocese of Syracuse for more than 55 years before retiring in 2003. He lived the rest of his life in the family home with his sister Joan, who now lives in Minoa.

Dan Michalski, of 1128 Oak St., was Father Keeffe’s next-door neighbor. He remembers him as a “great guy, he was very generous, he … always cared about his parishioners and even people in the neighborhood …, lending them money and letting them do work on his house.”

Of the family that will be moving in next door, Michalski said, “I’m happy that the house is going to somebody who’s gonna to use it and that the church is putting it to good use.”

A “basic do-over” was planned for the three-bedroom house, said Father Daley. Volunteer workers were going to tackle two rooms that had never been finished, along with painting, carpeting, windows, the chimney, the roof and the back porch. He said they will also work with the city at replacing the pipe carrying water from the street.

“We have been asked to come in because of our experience with the construction trades and clean, paint and work with volunteer contractors to get the home on Oak Street up to move-in condition—updates and fresh coat of paint and some new wallboard and items like that,” said Operation Northern Comfort CEO Flanagan. Her volunteer organization relies on private money and money raised at the Syracuse Crawfish Festival held on the first Saturday in May every year.

Justin is looking forward to his family remaining safe in their new home, and he is also thinking of going on with his education. “The biggest part is the way I got help here so that I can try to help others,” he said.

He noted that he has a car, and if one of the new refugees asks for a ride and he is available, he said, “why not should I help them? … I think everybody, there is a point where they ask for help. So it’s a cycle.”