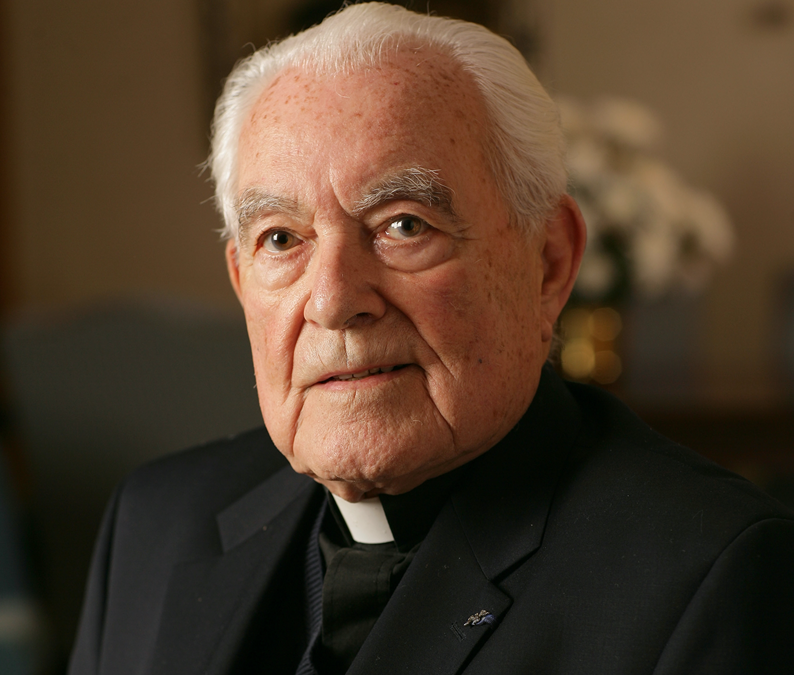 NOTRE DAME, Ind. — Holy Cross Father Theodore M. Hesburgh, who led the University of Notre Dame through a period of dramatic growth during his 35 years as president and held sway with political and civil rights leaders, died Feb. 26 at the age of 97.

As the longest serving president of Notre Dame, from 1952 to 1987, Father Hesburgh built the university from a small college primarily known for its prowess on the football field into one of the nation’s premier higher education institutions.

In announcing the highly regarded priest’s death, the university did not cite a specific cause.

Funeral arrangements remained to be finalized, but the university said a funeral Mass would be celebrated in the Basilica of the Sacred Heart on the Notre Dame campus.

“We mourn today a great man and faithful priest who transformed the University of Notre Dame and touched the lives of many,” Holy Cross Father John I. Jenkins, Notre Dame’s current president, said in a statement. “With his leadership, charism and vision, he turned a relatively small Catholic college known for football into one of the nation’s great institutions for higher learning.

“In his historic service to the nation, the church and the world, he was a steadfast champion for human rights, the cause of peace and care for the poor,” he said.

Father Hesburgh was born May 25, 1917, in Syracuse, New York, to Anne Murphy Hesburgh and Theodore B. Hesburgh, an executive of the Pittsburgh Plate Glass Co.

He was educated at Notre Dame and Rome’s Pontifical Gregorian University. He was ordained a priest of the Congregation of the Holy Cross in 1943 in Sacred Heart Church, today the basilica, on the Notre Dame campus. He received a doctorate in sacred theology from The Catholic University of America in 1945.

After doctoral studies he joined the university faculty, teaching in the religion department, and served as chaplain to World War II veterans on campus. In 1949 he was appointed executive vice president of Notre Dame. He became the university’s 15th president in 1952.

In 1967, he oversaw the transference of governance of the school from the Congregation of the Holy Cross to a two-tiered, mixed board of lay and religious trustees and fellows. The school also admitted women to undergraduate programs beginning in 1972.

Father Hesburgh also played an influential role in national and international affairs both during and after his presidency. He held 16 presidential appointments over the years, tackling major social issues including civil rights, immigration reform, peaceful uses of atomic energy, campus unrest, treatment of Vietnam draft evaders and development in the world’s poorest nations.

He was a charter member of the U.S. Commission on Civil Rights when it was created in 1957 by President Dwight D. Eisenhower. He chaired the body from 1969 until 1972 when President Richard Nixon dismissed him over his criticism of the administration’s civil rights record.

The Holy Cross priest also served on President Gerald R. Ford’s Clemency Board, which was responsible for deciding the fate of Vietnam offenders.

As a result of his work on the two commissions, the university developed a law school and the Center for Civil & Human Rights.

During a tribute on Capitol Hill in 2013, congressional leaders from both sides of the aisle honored Father Hesburgh days before his 96th birthday. Vice President Joe Biden said during the gathering that he ran for public office at the age of 29 in 1972 because of Father Hesburgh’s passion for civil rights. “You’re one of the reasons I’ve been so proud to be a Catholic,” Biden told Father Hesburgh.

Other elected officials at the event praised Father Hesburgh as an inspiration for all people in public office.

Father Hesburgh served on the Overseas Development Council, a private organization supporting interests in developing nations, beginning in 1971 and chaired it until 1982. He led efforts to overcome mass starvation in Cambodia in 1979 and 1980. From 1979 to 1981, he chaired the Select Commission on Immigration and Refugee Policy, which issued recommendations which became the basis of congressional reform legislation several years later.

During the Cold War in the early 1980s, Father Hesburgh joined a private initiative which sought to unite internationally known scientists and world religious leaders in condemning nuclear weapons. He organized a 1982 meeting at the Vatican of 58 scientists from around the world who called for the elimination of nuclear weapons.

Father Hesburgh served four popes, including three as the Vatican’s permanent representative to the International Atomic Energy Agency in Vienna from 1956 to 1970. Blessed Paul VI asked him to build the Tantur Ecumenical Institute in Jerusalem, which the university continues to operate. Father Hesburgh also served as head of the Vatican delegation attending the 20th anniversary of the United Nations’ human rights declaration in Teheran, Iran, in 1968. He also served as a member of the Holy See’s U.N. contingent in 1974.

In 1983, St. John Paul II appointed the Holy Cross priest to the Pontifical Council for Culture.

He also served as a trustee and chairman of the Rockefeller Foundation. He became ambassador to the 1979 U.N. Conference on Science and Technology for Development, the first time a priest served in a formal diplomatic role for the U.S. government.

In addition, Father Hesburgh served on several commissions and study groups in the field of education. He served as chairman of the International Federation of Catholic Universities from 1963 to 1970, leading a movement to redefine the nature and mission of contemporary Catholic education.

He holds 150 honorary degrees and was the first priest elected to the Board of Overseers of Harvard University, serving for two years, from 1994 to 1995, as president of the board. He also co-chaired the Knight Commission on Intercollegiate Athletics in its efforts to reform college sports, from 1990 to 2003.

Father Hesburgh wrote an autobiography, “God, Country and Notre Dame,” published in 1990 and three other books, including “The Human Imperative: A Challenge for the Year 2000,” “The Hesburgh Papers: Higher Values in Higher Education” and “Travels with Ted and Ned.”

He is survived by a brother, James. Three sisters preceded him in death.

The university said it was planning a tribute ceremony in Purcell Pavilion at the Joyce Center in the near future.