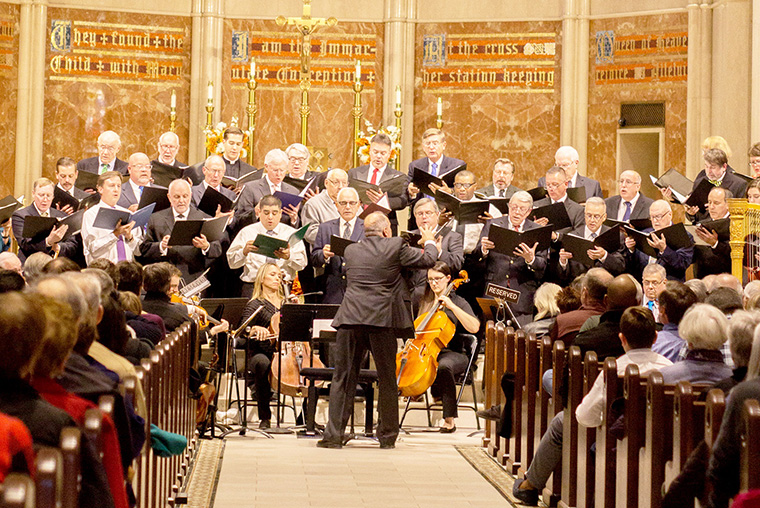 A Festival Choir of singers from around the Diocese of Syracuse with a festival orchestra of local musicians will perform Charles Gounod’s Messe Solennelle de Sainte-Cécile at 2 p.m. Sunday, Nov. 20, at the Cathedral of the Immaculate Conception, 259 E. Onondaga St., Syracuse.

Known to many simply as the St. Cecilia Mass, the masterwork was premiered in 1855 at the Church of St. Eustache, Paris, to celebrate the feast day of St. Cecilia, the patron saint of music. Guest soloists Julia Ebner, David Rudari and Dominick Corbacio join the festival chorus of 80 voices along with orchestral players from the surrounding area. The performance, conducted by Peter Ciarelli, director of the Cazenovia College Chorale, is free and open to the public.

The impetus for this performance began with Megan Fallon, a parishioner at St. James Church in Cazenovia, who sang the piece with the Cazenovia College Community Chorale last spring. Gounod’s lyrical creation will be presented in celebration of St. Cecilia Day, two days after the performance.

The chorus has been rehearsing weekly at St. Daniel parish in Syracuse. Although not widely performed, the Saint Cecilia Mass solidified Gounod’s reputation as a composer, best known for his opera “Faust.” Composer Camille Saint-Saëns sitting in audience at the premier stated, “The appearance of the Messe Saint-Cécile caused a kind of shock. This simplicity, this grandeur, this serene light which rose before the musical world like a breaking dawn, troubled people enormously. … At first one was dazzled, then charmed, then conquered.”

Voluntary donations will be accepted to Music for the Mission to feed the homeless.