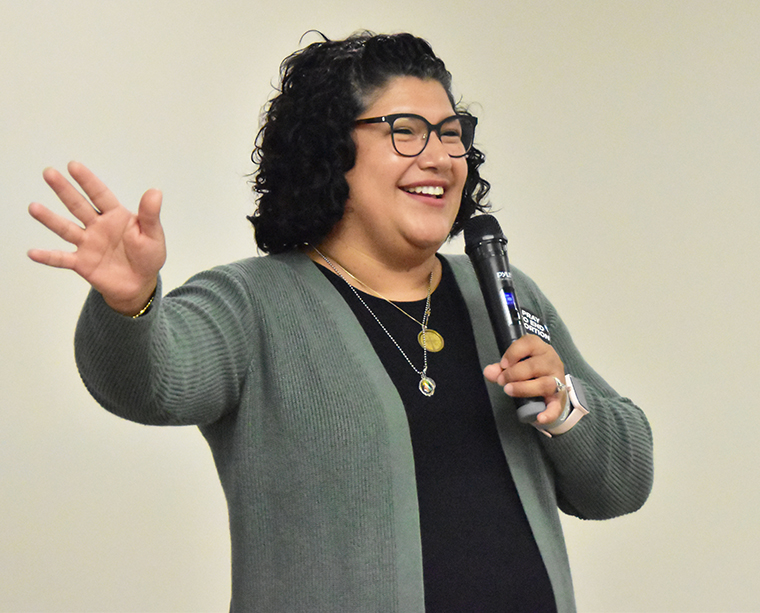 She goes from city to city, denouncing her former Planned Parenthood job and promoting life.

Ramona Treviño can’t calculate how many abortions she was responsible for in her three-year managerial job for Planned Parenthood in Texas, but she knows that Catholic radio got her started out the door.

“Well, we know conversion happens differently for everybody,” Texas resident Treviño, the outreach director for the headquarters team of 40 Days for Life, said recently at St. Rose of Lima Church in North Syracuse. “For some it’s a St. Paul moment, you know, where you’re hit on the head and boom, right? For others, it’s a long drawn-out process.”

Treviño has authored a book, “Redeemed by Grace.” Hearing her speak were volunteers from the 40 Days for Life Syracuse Campaign, the fall version of which was set to conclude Nov. 6 in front of Planned Parenthood in Syracuse. “She kept us on the edge of our seat,” said Martha Glover, of Westvale.

Now 45, Treviño comes from a “little rural town northeast of Dallas. … Less than 700 people. Everybody knows everybody and so when I became pregnant (at 16) you can imagine the scandal.”

She added, “I knew that what was in my womb was not a what but a who. And it was my child.” She had the baby but was in a very abusive relationship for eight years. Two years after she walked out of that relationship, she met her now husband of 16 years; they were married in the Catholic Church.

At age 30, Treviño took the Planned Parenthood job at a referral clinic in Sherman, Texas, north of Dallas; the actual surgical centers were in Dallas and Fort Worth.

“I was a stay-at-home mom for the first time in my life, and I felt this restlessness and this desire to get into the workforce,” she explained.

She said: “I didn’t know where women went to get abortions, that’s how kind of secluded I was from the reality of abortion and it wasn’t something we talked about in our home and in my life and so I accepted this opportunity thinking that I was actually helping women and that I was somehow going to prevent abortions, and I realized very quickly that I was complicit in abortions despite the fact that they weren’t happening under my roof.”

Probably a week or two into the job, she said, she conducted a pregnancy test for a college student who came into the clinic. “I said what normal people say to women when they’re pregnant. I said, ‘Congratulations, you’re pregnant.’ And she immediately burst into tears. And I had failed to see that on the intake form, she had had chosen abortion as the option she wanted information on. …

“And I thought, oh, man, I just messed up. … And I turned to God — I know, it’s weird — I turned to God and I said, Lord, please help me out of this. Probably the devil that was helping me out of it. But basically I … was trying to find a way to say it in the right way where I wasn’t complicit in her choice. And so she walked out of my office, walked out of the exam room, out of the clinic, in tears as I gave her her referral for the abortion. And I walked back into my manager’s office and the strangest reaction is that I closed the door behind me and I began to cry. I was like Pontius Pilate. …

“I needed my job, and I wanted my job. And I had something to prove. Not just to myself, but to the world — that Ramona wasn’t just some teen mom who had dropped out of high school and failed in life, so to speak. I was an honor student and everyone in school thought I was going places, right?”

A new outlook started to take shape in December 2010: “It was actually through Catholic radio that God reached me first. And that was kind of the catalyst that set everything in motion.”

Over the next several months, Treviño kept showing up for work three days a week. But she heard the word “abortifacient” on Catholic radio in connection with contraception; wondered if she had blood on her hands from her own contraception (which she did stop using); realized that everything they said on Catholic radio was true; asked a rookie 40 Days for Life volunteer to pray for her; and realized that “m-a-a-a-a-y-be” there was “some pretty spiritual stuff going on.”

One such moment came on Divine Mercy Sunday, May 1, 2011, which coincided with the beatification of Pope John Paul II. Treviño attended Mass with her family. “During the consecration,” she said, “I heard very clearly, the words, ‘Ramona, have faith in me, I forgive you.’”

She worked that Tuesday, then Wednesday. “I said, ‘Lord, please help me, get me through today,’” she recalled. With about one hour left in her workday that Friday, a young woman came in seeking a pregnancy test. Treviño’s description of the encounter drew applause from the St. Rose audience.

On a form, the young woman had marked “abortion,” “adoption” and “prenatal.”

“And I opened my mouth, can’t tell you exactly what came out. And I remember just telling her, sharing my own experiences as a 16-year-old mother who had gone through so much. And I shared with her how God had brought me to the other side of that, and brought someone into my life that would love me, love my daughter the way we were meant to be loved. And I shared my story with her, and she stood and she threw her arms around my neck.”

Three months later, she said, the clinic where she had worked shut down. And, she added, her family “had the first of our next three conversion babies. … We had three kids when we worked at Planned Parenthood. … Three of our little conversion babies are here today because of that. …  It was all part of God’s plan.”

Sally Dorsey, like her sister Martha Glover a resident of Westvale, said Treviño was a “marvelous speaker and you felt everything she said. She’s got a great faith in God and that’s what’s brought her through all this.”

Another audience member was Lucienne Henneberry, a speaker and counselor for the diocesan Project Rachel Ministry, a post-abortion healing ministry. Henneberry said it was very moving “just to see the way God worked in her life to bring her to the truth.”