Friar Phil Kelly leaves behind his stories and his charism

Friar Phil Kelly died on Labor Day, Sept. 7, at Francis House. He succumbed to the bladder cancer his doctors discovered in July. He was 77 and a Franciscan friar at Assumption Church on Syracuse’s north side. 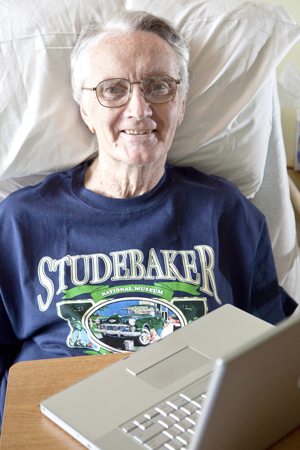 Friar Phil wrote a column, A Companion for the Journey, for the Catholic SUN for several years and he ran a Franciscan magazine in Toronto for a number of years.

Once Phil knew he was terminal, a peacefulness came over him that was extraordinary to witness. I am a cry-er from way back. It is common knowledge at the newspaper that I don’t cover funerals. Yet, for some reason, I didn’t shed a tear when I visited Phil at Francis House. He wasn’t crying; he was smiling and so my tears would have seemed out of place.

Don’t get me wrong, I turned on the faucet full blast the last time I left his bedside, two days before he died. I knew it would be the last time I’d see him. His big, luminescent blue eyes were looking at something I couldn’t see, I told him. And he said in reply to me, “Now that could be good or that could be bad.”

He wanted me to talk to him so I told him I was reading Frank McCourt’s Angela’s Ashes aloud to my son Danny. “Where is Frankie McCourt?” Phil asked me. “Well, he passed away just a month or so ago,” I told him. Phil raised his eyebrow at that and all I could think was that he would track Frank McCourt down as soon as he got to heaven.

Phil Kelly loved to write. On more than one occasion we would be at the same event and we’d both pull out our pad of paper and leaky pen at the same time. We shared a style of “old school” writing that never involves much more than pen and paper and our ears straining to catch a good lead.

Phil wrote stories about the poor, the marginalized, the refugees, the homeless and the prostitutes in his column. Through his words, he raised money for all kinds of causes from St. Baldrick’s Day to a family who couldn’t afford to send their son on a school trip. It got to be a running joke at the newspaper, “Who’s Phil collecting for now?”

He liked to refer to me as his “editor” or his “boss” oftentimes in his column and he loved to get email from readers. He loved to hear their stories. Sometimes editors have to remind their writers of deadlines and there are times when I wait by the email in-box longer than I’d like to. With Phil, I always had two or three columns to choose from because he wrote so often. If I was waiting by the in-box over the past seven or eight years, it was because I had lost his column and he had to resend it to me.

We had a tradition that we came up with a few years ago. We met at Riley’s on the east side of Syracuse about once a month for dinner and conversation. Phil would order the frog legs and I would start talking about those amazing desserts before the water arrived. And I would ask, “Who orders frog legs?” and he would say something like “I do, my dear.” If there had been crocodile on the menu I’m sure he would’ve tried it.

Phil was so much more than a columnist. He was a friend, a very dear friend. He could make me laugh when the absurdity of motherhood or my job was getting the best of me. He would tell a little story about Francis or about the family he met at the Franciscan‘s north side ministries he loved so much. I’d forget all about my mundane complaints and wonder how in the world that family or that prostitute or that grandmother was going to make it.

Phil loved his own family and he loved to talk about their homestead in Ottawa. I could almost see the place when he’d describe it. He showed me a photo of a family reunion and because the family was so large, the different members of the clan wore colored t-shirts to designate which part of the family they came from. He loved that picture.

He loved to hear about my family, too. He had met all of my children at one time or another. Phil drove my youngest son, Danny, ―who is autistic, and me up to Orwell for the annual Unity Acres picnic a few years ago. He had just gotten his Toyota I think it was, and he was filled with consternation all 45 miles up Route 81 because Danny would roll down his window in the backseat and Phil would roll it up. He hadn’t figured out the window lock yet. It was fun to watch him try to reason with Danny who rarely takes to reasoning. I do think he walked away from that little outing with a clearer understanding of autism. Ironically, the last couple of weeks of Phil’s life he was typing on his lap top at Francis House using the same slant board Danny uses when he types on his keyboard using facilitated communication.

Phil loved being a Franciscan. He loved the very humanness of St. Francis. Phil loved to watch Sisters Dolly and JP when they worked at the health clinic or served coffee on Tuesdays. He would wonder, “How the hell come they can smile so much?” We decided it was easy for them to smile when they were working in the neighborhood because they really do see Jesus in everyone.

I’m not sure what we’ll do at the newspaper regarding Phil’s column. I can’t think of it yet because it’s too soon for me. My eyes fill when I think about his friendship and how much I will miss him. But, I have to admit, I’m already talking to him from wherever he is and I can hear him say, “Well, you better get on it, girl. Somebody has to write about the poor.”

He was really the boss.