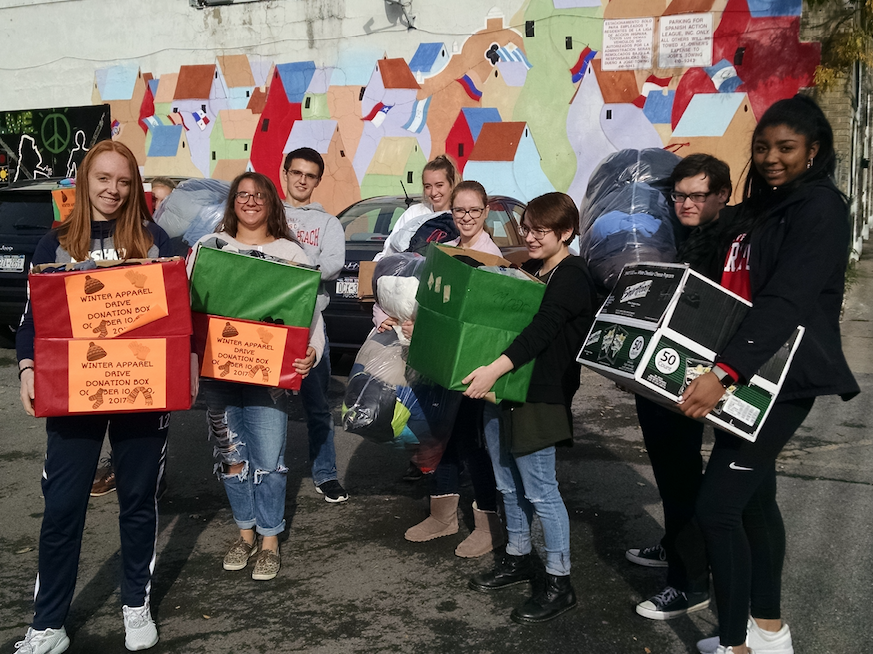 Christmas is indeed the season of giving, but giving is always in season at Bishop Grimes.

Students at the junior/senior high school in East Syracuse have undertaken a number of service projects recently, continuing work that’s long been a central part of the educational experience at the school.

“As a school, service is one of the cornerstones of our educational program,” Assistant Principal Patrick Kinne explained to the Sun in an email. “First, we believe that by having students look outwards — towards those either within our local communities or beyond — it helps our students to realize how greatly blessed they really and truly are. Making students aware of and providing opportunities for them to work with organizations that are serving people in need or are sometimes pushed to the outskirts of society will hopefully instill a desire within our students to give back and to be a caring and compassionate adult who is aware of and takes action to right socially unjust situations.

“Secondly, we try to instill in the students the realization that our service to others is a way that we can outwardly show our thanksgiving to God for all of his blessings and His never-ending faithfulness. It’s one of the ways that we can thank God while also answering Christ’s call in the Gospel of Matthew to care for our brothers and sisters (25:36-40) knowing that when we do these [things] (i.e., clothe the naked, feed the hungry, help the sick) to the least of them, we do it to Christ as well,” Kinne said.

Among the projects recently tackled by the school was a winter apparel drive to benefit the Spanish Action League in Syracuse. The project was spearheaded by Sharon Bearer’s Spanish V class, made up of 11 seniors, and led by student Kendall Mancuso.

There’s a lot of service that goes on in the building, Bearer said, and over the last couple of years, the Spanish class itself started to do good bit of service work. “We found we were spending so much time on service, we were having trouble getting academic work done,” she said with a laugh.

Bearer said she wants her students to be fluent in the language they’re learning, but also to realize that there are people in need “who speak that language right here in our area… how can we not help them?”

“Show them how they can make a difference,” Bearer said of the students, “and they want to do whatever they can.”

So Bearer gave the incoming class an assignment last summer: come with a proposal for a service project.

The Spanish Action League was on Bearer’s list of organizations that might be interested in partnering on a project. Mancuso got in touch with the group, and began making plans to collect school supplies for children.

“But then the idea of a clothing drive for adults and children came up,” Mancuso recalled. She thought that was “a great idea” since, in the wake of Hurricane Maria, people relocating from Puerto Rico to Central New York in November would be in desperate need of some winter gear.

The Grimes community rose to the occasion, donating both apparel items and more than $700 in cash. After a couple of shopping trips to Wal-Mart, the school was able to bring 337 pairs of gloves, 271 hats, 218 pairs of socks, 75 scarves, 18 scarf sets, 45 coats, and a variety of winter footwear to the Spanish Action League.

Mancuso was among the students who helped to deliver the goods, packed into two school vans. Once unloaded, “the stack was basically as tall as me, and I’m 5’4”,” she said. “It was really nice to see, and to do something out in the community,” she recalled.

Jesús M. Rolón, Executive Assistant at the Spanish Action League of Onondaga County, Inc., said in an email that the agency appreciated the donation from the school. “We have been working hard to help our brother[s] and sisters in Puerto Rico but also all the families that are coming to Syracuse due [to] Hurricane Maria,” he said, and with the donation, the agency was “able to help a lot of families from Puerto Rico that didn’t have the appropriate clothing for this weather.”

Also on the Spanish class’s to-do list this year: collecting diapers for a local diaper bank and continuing to partner with local elementary schools. But that’s not nearly all.

• The school contributed to what is hoped to be a world-record-breaking event: collecting the largest number of socks in an eight-hour period. Billed as “Sock it to Syracuse,” the November 11 drive was the brainchild of Terry Money and the Ladies of Faith group at Sacred Heart Church in Cicero. Grimes contributed more than 350 pairs of socks to the effort, which ended up gathering more than 9,000 pairs in total from parishes, schools, and individuals in the area, according to Sacred Heart’s Deacon Ken Money. The socks were donated to local organizations including Catholic Charities’ Men’s Shelter, Joseph’s House, and Road to Emmaus Ministry. (The current world record stands at almost 3,000 pairs, Deacon Money said, and the church’s paperwork has been submitted to Guinness for official review.)

• Grimes students and families collected 1,090 non-perishable food items and cash donations in November to benefit the Interreligious Food Consortium (IFC), Kinne said. The drive was organized by the school’s student council and class officers. Michele Jordan, IFC Director, attended the school’s Thanksgiving Prayer Service to accept the donations and to speak about the organization’s work locally and about the issue of hunger, which thousands of families in Central New York face.

• The Spanish class helped to stuff new backpacks with toys for children in Colombia, part of a longstanding partnership with Project Smiles.

• The Spanish class sponsored a dress down day Dec. 18 to help raise funds for another project: collecting first aid supplies, hats, and sunglasses to be brought to the Dominican Republic with Grimes alumnus Vinny DeRienzo, class of 2009. Kinne shared that DeRienzo will travel to the Dominican Republic this winter with Students Without Borders, and that he will pay a visit to the school before Christmas “to meet the Spanish classes and thank them for their help and support.”