How about lacing them up for a vocation? 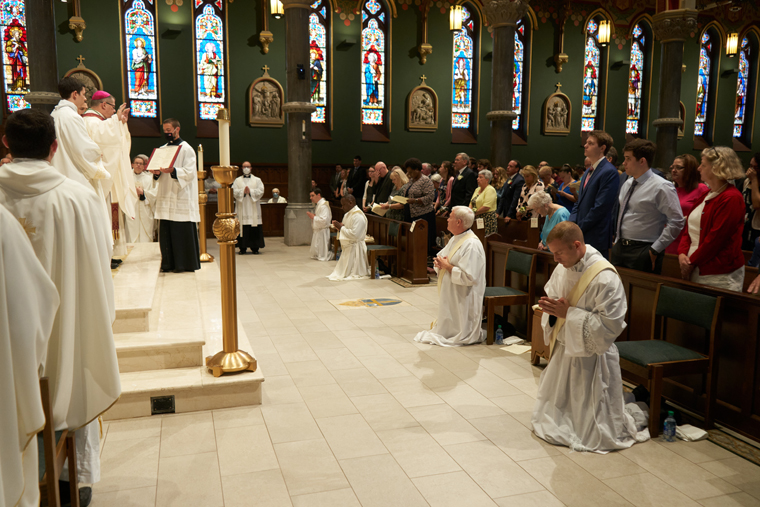 Since vocation promotion is an art, a pair of priestly black dress shoes makes a “powerful symbol” sitting on a pedestal next to an LED candle in churches around the diocese.

Art-conscious Father Jason C. Hage, Director of the Office of Vocation Promotion, asks: “Who will fill these shoes?”

“Hopefully,” he said, “this powerful symbol will drive home to our young people the need to consider God’s call in their own lives in order to meet the need.” The need is even greater now;  Father Hage noted that 20 priests in the diocese died in the past year.

Coming to a close on Nov. 21 is the Year of Vocations that Bishop Douglas J. Lucia began on Nov. 14, 2020. In that time, Father Hage’s own black shoes have visited many diocesan locales in his search for future priests and other religious.

Father Hage wants to build on this past year, when the Diocese of Syracuse ordained four priests at the same rite for the first time in 20 years. He met with every diocesan office—“the bond is real now in terms of how all of these offices can be contributing to the work of vocation promotion and I think my future goal is to continue to make sure that those connections last. … It’s a cultural movement, and the more we strengthen those simple connections and bonds, the more … those young people will be able to say yes to their call.”

Father Hage thinks the coronavirus pandemic “has intensified and strengthened our contact with young people, because they’re all online. So I’ve actually had more Zoom calls and Zoom meetings and discernment groups; I’ve been able to put out more and reach more young people because … they’re all online—they’re on Twitter, Instagram, Facebook, all this kind of stuff, and so during the pandemic I had to change gears pretty quickly and say, how do I continue this vocations effort?” 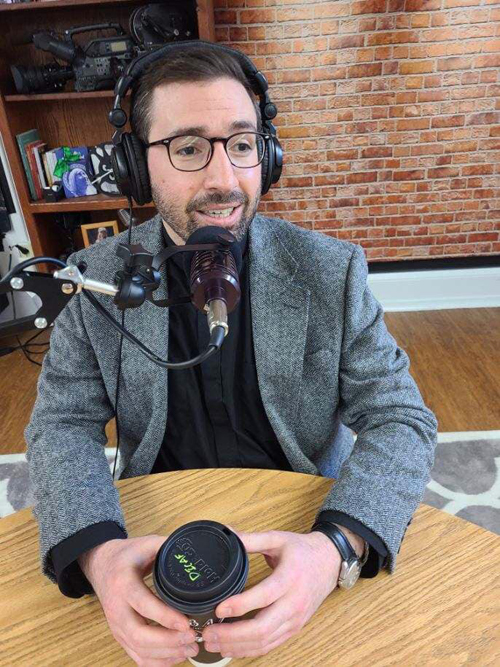 One answer is a new podcast, “Vocation Chats,” hosted by Father Hage and Father Christopher Celentano, pastor of St. Rose of Lima in North Syracuse and St. Margaret’s in Mattydale. The podcast gives listeners a window into the life and ministry of a priest, and every new episode is posted on Facebook and Instagram via vocations-syracuse.org.

“It talks about general principles of discerning God’s will for your life,” Father Hage said, “and how to go deeper in your relationship with Jesus through prayer. So even people who aren’t discerning their vocation in life are getting a lot out of it as well, which is pretty cool.”

Father Hage has also been working with Rhonda Gruenewald (vocationministry.com), an author and traveling speaker who visited the Diocese of Syracuse in September. With Gruenewald’s help, he said, “we trained over 200 lay people representing 90 out of 119 parishes in our diocese. … We had 52 parishes as well as all of our Catholic high schools agree to host the traveling icon of St. Joseph, which means that there has been a Holy Hour for Vocations and a Rosary for Vocations offered every single week in our diocese without pause throughout this year of grace. …

“Everyone at every level of our diocesan family generously availed themselves of these trainings on the art of vocation promotion at the parish and school levels. … Everyone is called to be a vocation promoter in the Diocese of Syracuse. … It’s all about the pursuit of holiness with the hopes of fulfilling our universal call and vocation that we all share, which is to become saints.”

Gruenewald said that the average age of a U.S. priest is 67 and that 3,500 parishes are without a resident priest. The Center for Applied Research in the Apostolate at Georgetown University reports that as of 2020, there were 35,513 total priests in the 50 states, the District of Columbia, the U.S. Virgin Islands and overseas in the U.S. military. The report says only 65 percent of diocesan priests are active in ministry.

“There isn’t a crisis with a call,” Father Hage said, “it’s a crisis in response. I think God is calling many of our young people, I’m just not sure that, because of the culture they live in—it’s so noisy and there’s so many things demanding their time and attention—I just think sometimes our young people can’t hear it. And I think that’s where parishes can really enter in and say, how do we create a space where our young people can hear the call and respond to it courageously. Because God is calling. There’s no shortage of the call.”

“Year after year,” according to author Gruenewald, “studies show that 75 percent of the newly ordained say they first heard the call between birth and 18 years of age. So, fostering vocations in our Catholic schools is a natural fit.”

One role model who got Father Hage thinking was Sister Margaret, who was the principal at the former Nativity of the Blessed Virgin Mary School in Brockport.

“Every day she was smiling and happy to see me,” he said, “and filled with joy and love; she was just like love incarnate. She was love right in our midst as children and I just think it’s amazing that my strongest memory of a religious sister is someone who’s loving and joyful. … That joy’s connected to this call.”

Priests say that the first time they thought of their vocation and really considered it, they were either 11 years old or in the 11th grade, he said. “I myself first considered the call at the end of my junior year in high school.”

It wasn’t as if the sky opened and the clouds cleared, he said. “For me it was … deep in my heart while I was doing some prayer, just personal prayer; then all of a sudden it just hit me like a ton of bricks; I’m like, oh my goodness, I feel like my heart’s built for that. … There was a movement in my heart that just very clearly spoke to me that said: You’re built for this, your heart’s made for this.”

Father Hage is expressive, outgoing, but he said: “One does not need a larger than life personality to encourage vocations, you just have to identify gifts and abilities in young people and then have the courage to make the ask, to say, hey, I see you praying at Mass, and you’re really praying. Have you ever considered the priesthood or religious life? Hey, I see you’re very committed to youth ministry and you’re a leader in this group; have you ever considered [a vocation]? … Just the very gentle encouraging presence that our young people need that might help them cross the threshold of saying, yeah, maybe I will consider this.”

Asked if a vocation is ultimately about changing the world, he said: “Absolutely. I think it’s people who give their radical yes to God in love for their lives, that gives life to the world. Like Jesus said, you’re the salt of the earth, you’re the light of the world. Anyone who says yes in a radical way to God just by that one yes has already changed the world.”