Ideals worth sacrificing for: Pope to challenge U.S. Congress, U.N. 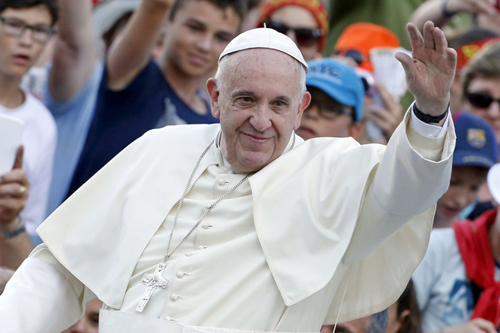 VATICAN CITY (CNS) — Along with having a winning smile and a warm embrace, Pope Francis is known for challenging people.
He does it regularly at morning Mass — particularly calling out hypocrisy and gossip — and does not spare even his closest aides in the Roman Curia, so it is unlikely his speeches to the U.S. Congress and the U.N. General Assembly will let his audiences leave without a suggested examination of conscience.

His speeches to Congress and to the United Nations in late September will be less pastoral than his homilies, obviously, and more about policy. They will be crafted carefully with the assistance of the Vatican Secretariat of State.

The themes will reflect the priorities of Pope Francis, not as an individual, but as head of the universal Catholic Church. With the exception of a few classic, colorful Pope Francis analogies — an infusion of Pope Francis’ personality — the speeches are expected to be similar in style and tone to those his predecessors delivered at the United Nations.

Like his predecessors, Pope Francis will praise the founding ideals of both the United States and the United Nations; the challenges will come when he urges the leaders of both to live up to those ideals and to do so consistently.

At the center of both speeches will be a call to work for the common good — not just the interests of their campaign supporters or even of all their constituents — with a vision that recognizes, as the pope repeatedly says, that there is only one human family and that people have a shared responsibility for others and the world.

A global problem, one he addressed last November at the European Parliament and Council of Europe, is an approach to human rights that is disconnected from responsibilities and from an individual’s connection to the wider community.

“Unless the rights of each individual are harmoniously ordered to the greater good,” he said, “those rights will end up being considered limitless and consequently will become a source of conflicts and violence.”

The pope recognizes how tough a politician’s job is. In his apostolic exhortation “The Joy of the Gospel,” he wrote that “politics, though often denigrated, remains a lofty vocation and one of the highest forms of charity, inasmuch as it seeks the common good.”

In the exhortation, Pope Francis strongly defended the right of believers to bring their faith to bear on the social, economic and political issues of the day.

“No one can demand that religion should be relegated to the inner sanctum of personal life, without influence on societal and national life, without concern for the soundness of civil institutions, without a right to offer an opinion on events affecting society,” he wrote. “Who would claim to lock up in a church and silence the message of St. Francis of Assisi or Blessed Teresa of Calcutta?”

Authentic faith, the pope wrote, “always involves a deep desire to change the world, to transmit values, to leave this earth somehow better than we found it.”

For Pope Francis, making the world a better place is not a catchy line from a pop song. It is about rolling up one’s sleeves and feeding the hungry, welcoming the immigrant, rescuing the victims of human trafficking, reducing the carbon emissions that contribute to global warming and ensuring jobs for young adults.

Making the world a better place, he often says, means putting the needs of real people above the desire for maximum profits. A healthy economy and lively businesses are essential, but they must grow along with the entire population.

In his encyclical, “Laudato Si’,” the pope recognized the dilemma facing politicians who know that short-term sacrifices — and re-election risks — are needed for long-term gains in safeguarding the environment. “But if they are courageous, they will attest to their God-given dignity and leave behind a testimony of selfless responsibility,” he wrote.

Courage also is needed to overcome what the pope has described as “the globalization of indifference,” “the economy of exclusion” and the “throwaway culture,” which are the main forces he sees at play behind hunger, poverty, abortion, discrimination, immigration, war, environmental devastation and a host of other global problems.

While every person of good will should join the fight, Pope Francis sees the United Nations as a global institution whose very purpose is to pay attention to and assist those most in need, most under threat and most often excluded from the benefits of economic development.

His visit coincides with a scheduled vote on the sustainable development goals, a list of 17 major commitments that the world’s nations and U.N. agencies will be asked to pursue until 2030, beginning with concrete steps to end extreme poverty everywhere.

Archbishop Silvano Tomasi, the Vatican representative to U.N. agencies in Geneva, noted that the Catholic Church concretely works around the globe to end poverty and inequality and promote solidarity, but it cannot support the inclusion in the development goals of “reproductive health” when it means access to abortion.

The text of the goals seems to present abortion as “a right that should be guaranteed to all,” he told the Italian Catholic newspaper Avvenire Aug. 11. “It’s as if by eliminating people there would be fewer problems.”

Pope Francis may repeat what he told members of the European Parliament about promoting — even unconsciously — the human rights only of those who are useful producers and consumers. “As is so tragically apparent,” he said, “whenever a human life no longer proves useful for that machine, it is discarded with few qualms, as in the case of the sick, of the terminally ill, the elderly who are abandoned and uncared for, and children who are killed in the womb.”

Even on the question of climate change and preparations for the U.N. Climate Change Conference in Paris at the end of the year, the pope’s challenge to the United Nations will come back to his conviction that too many people and nations have made money their god and self-interest their only criterion for judgment.

“International negotiations [on climate change] cannot make significant progress due to positions taken by countries which place their national interests above the global common good,” the pope wrote in his environmental encyclical. “We believers cannot fail to ask God for a positive outcome to the present discussions, so that future generations will not have to suffer the effects of our ill-advised delays.”