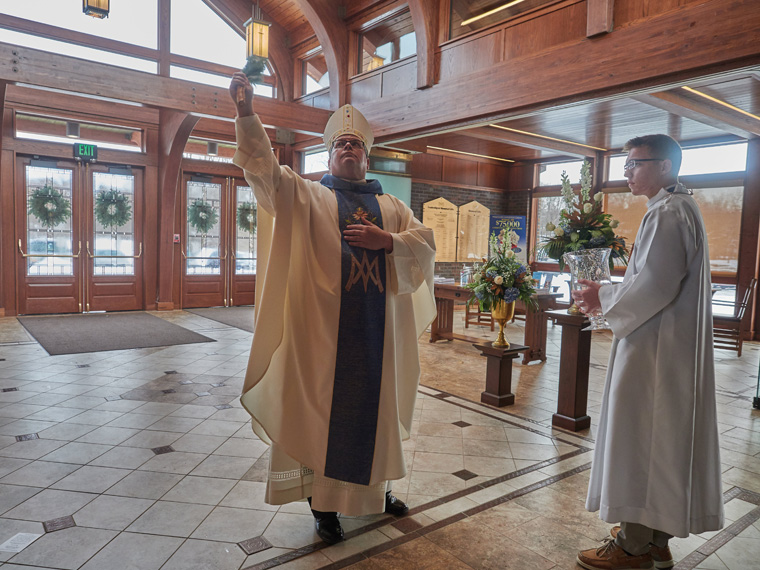 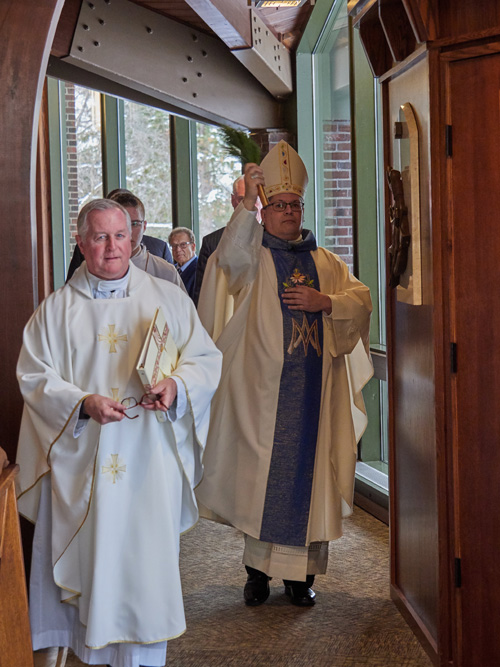 Bishop Lucia, accompanied by Father Thomas J. Ryan, pastor of Immaculate Conception, blesses the Stations of the Cross and the walls of the church. (Sun photo | Chuck Wainwright)

FAYETTEVILLE — One hundred and fifty years of faith were celebrated Dec. 8 as the community of Immaculate Conception Parish in Fayetteville capped off its sesquicentennial year with an anniversary Mass of blessing and rededication.

In his welcoming remarks to those gathered in praise and thanksgiving, Father Thomas J. Ryan noted that “I am privileged to be the 14th pastor of this faith community. Throughout this century-and-a-half, the parishioners of Immaculate Conception have served this community and the wider area with devoted service and charity.”

Father Ryan offered a brief look at that history in his letter in the Mass program:

“The history of Immaculate Conception is much more than these written words and pictures; it truly is a lived experience of faith. The first Mass celebrated in the Fayetteville area took place with a small group of families in 1854 at the home of John Farrell. Father James Cahill, the pastor of St. James in Cazenovia, arrived on horseback! As the crowds continued to grow, the need for a church became obvious. Shortly thereafter, Mass was frequently offered in Beard Hall on East Genesee Street over looking the Limestone Creek. 1869 was a banner year for this young community as Father James O’Reilly was named the first pastor of the newly established Church of the Immaculate Conception. 110 poor but devout families worked with Father O’Reilly to purchase a vacant piece of land in the center of Fayetteville. After raising the necessary funds, the new church was completed at a cost of $11,900. With great joy, the first Mass was celebrated on Christmas Day 1870! From that first small group of families at the home of John Farrell to the 2,250 families that I am privileged to pastor, this community has lived the faith, spread the faith, and been challenged by the faith.”

The celebration also marked the 50th year since the current church structure was built; the original church was torn down in August 1969 and the lot sold. A recent capital campaign undertaken by the parish provided for numerous repairs to and renovations of the church, including the creation of a beautiful and welcoming entrance and gathering space.

Bishop Douglas J. Lucia, principal celebrant of the Mass, was joined by concelebrants Father Ryan; senior priests in residence Msgr. Ronald C. Bill and Father Philip A. Hearn; former pastors Msgr. J. Robert Yeazel and Father Michael Carmola; former associate priest Father Peter Reddick; and Father Matthew Lyons. Members of the Sisters of St. Francis of the Neumann Communities, who have served at the parish throughout its history, were also present for the celebration.

Bishop Lucia blessed and rededicated the church in honor of the patroness of both the parish and the diocese, the Immaculate Conception. After sprinkling the entrance and gathering area, baptismal font, devotional shrines, music dias, ambo, altar, stations of the cross, crucifix, tabernacle, and the congregation, the bishop offered a homily that invited those present to rededicate themselves as well.

The Word of God — from the image of the wolf as a guest of the lamb in the day’s first reading (Is 11:1-10) to John the Baptist preaching and baptizing in the Gospel reading (Mt 3:1-12) — invites us “to recommit ourselves to God’s vision,” he said.

The question before the faithful at this time of rededication, he said, is “how can you and I grow ever deeper into the life of God like did our mother Mary?”

“What we find ourselves today being invited to do is to recommit ourselves, to not just say I’m a Christian, say I’m a Catholic, say I’m a member of Immaculate Conception, but even more to become that — to become who we are,” he said.

After a joy-filled Mass that included vibrant music and song, and participation by IC School students, parish faith formation students, parishioners, and staff, four members of the 150th Anniversary Committee were beaming.

Co-chairs Kathleen and John O’Connor and Daryll and David Wheeler credited the members of the four subcommittees — service, spiritual, social, and communications — Father Ryan and the clergy, parish staff, and fellow parishioners for the tireless work that went into the yearlong celebration. Among the events organized were receptions, monthly holy hours, and a day of service that saw parishioners assist at the Brady Faith Center, Brady Farm, Catholic Charities’ CYO, and Christ the King Retreat House.

Father Ryan was born in Syracuse where his father, William “Nibs” Ryan, owned and operated the well-known Nibsy’s Pub in the predominantly Irish Tipperary Hill neighborhood. Father Ryan grew up living next door to St. Patrick’s Church and attended parochial school from kindergarten through grade 12.

“Over those years, the dedicated priests and sisters gave so much to the families of the West Side and modeled the happiness and satisfaction of religious life,” stated Father Ryan. “Their example certainly had an effect on my vocation.”

After serving for 25 years in the Southern Tier, Father Ryan became the pastor of Immaculate Conception Church on July 1, 2006. At Immaculate Conception, he has instituted a strong financial strategy for the parish as well as the school, increased tithing, and carried out a successful capital campaign to renovate the church.

“I am very grateful to be a part of the rich history of Immaculate Conception,” Father Ryan noted. “These 150 years speak of a community which has embraced the faith and shared it so well with others.”

Excerpted from material provided by Christine Hiney on behalf of Immaculate Conception Parish. The Sun extends its than