‘Is your whole life in a posture of prayer?’ 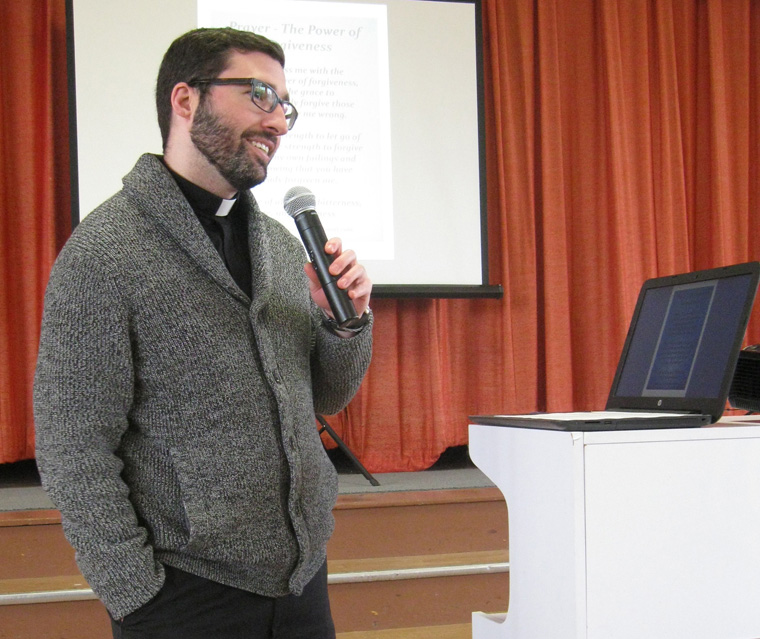 Father Jason C. Hage touted the value of silence at a Lenten “Soup & Scripture” presentation March 13 at the Chancery Annex in Syracuse.

“Don’t be afraid of solitude. … Silence is the doorway to solitude,” said Father Hage, administrator of St. Mary Church in Hamilton and St. Joan of Arc Mission in Morrisville. He also has sacramental responsibilities to the students at Colgate University in Hamilton; and once a month at Le Moyne College he meets with the Fisherman’s Club, a diocesan initiative of discernment that may lead young men to the seminary.

In a place of silence, Father Hage told diocesan employees, “you have to face yourself.”

He asked them: “When was the last time you went to pray, and you did so without using the words?”

Father Hage cited a statement from Pope emeritus Benedict XVI that “silence is the language of God! So if you want to speak God’s language, you have to speak silently.”

Referring to Matthew Kelly’s book “Rediscover Catholicism: A Spiritual Guide to Living with Passion and Purpose,” Father Hage challenged the employees to take just 10 minutes every day during Lent to go into a place of silent prayer.

He added: “St. Augustine … said that the one that’s moving into a deeper place of maturity in their spiritual life, in their prayer life, they’ll actually stop using words in their personal private prayer.”

He also quoted St. Therese of Lisieux: “Prayer is a surge of the heart.”

And St. Paul advocates praying without ceasing, Father Hage said: “How do you do that? It’s not possible, right? — if you’re using words. But you CAN pray without ceasing if your heart is ALWAYS in a state of prayerful consideration of God’s presence.”

Silence, Father Hage said, “is the wellspring of evangelization. Why is that true: because silence is the place of encounter. That’s where conversion of hearts happens, that’s where the changing of mind and heart happens, that’s where repentance happens when we go willingly into a place of silence and say, I’m just going to trust, as scary as this might feel.”

“Silence can be scary for some,” Father Hage said, “because they confuse solitude with loneliness. … Being alone is actually a prerequisite for an encounter with Christ.”

When one goes to be alone with God, Father Hage said, “all of a sudden all our other relationships become … that much more intense.”

He asked: “Is your whole life in a posture of prayer?”

Attendee Saundra Macidyn, administrative assistant for the Foundation of the Roman Catholic Diocese of Syracuse, was happy that Father Hage introduced “this new way of prayer” into her life. She pondered what silence with the Lord means to her.

“As Father Hage mentioned,” she said, “silence is taking the time to sit quietly in a sacred space if you can or just somewhere away from noise and distractions. In addition to praying the Chaplet of St. Michael this morning before work, I did take the 10-minute challenge and will continue this throughout Lent and incorporate it into my daily life thereafter.”

In the “silence” mode, she said, “it was a little difficult because thoughts would come into my mind and I would have to refocus each time I was distracted. We are so in tune with noise and distractions during the day, that we don’t take the time to actually be ‘still.’ As far as any messages or words that I received from the Holy Spirit, there were none. This discipline will take a few times until being in complete silence with the Lord will happen. I am not giving up.”