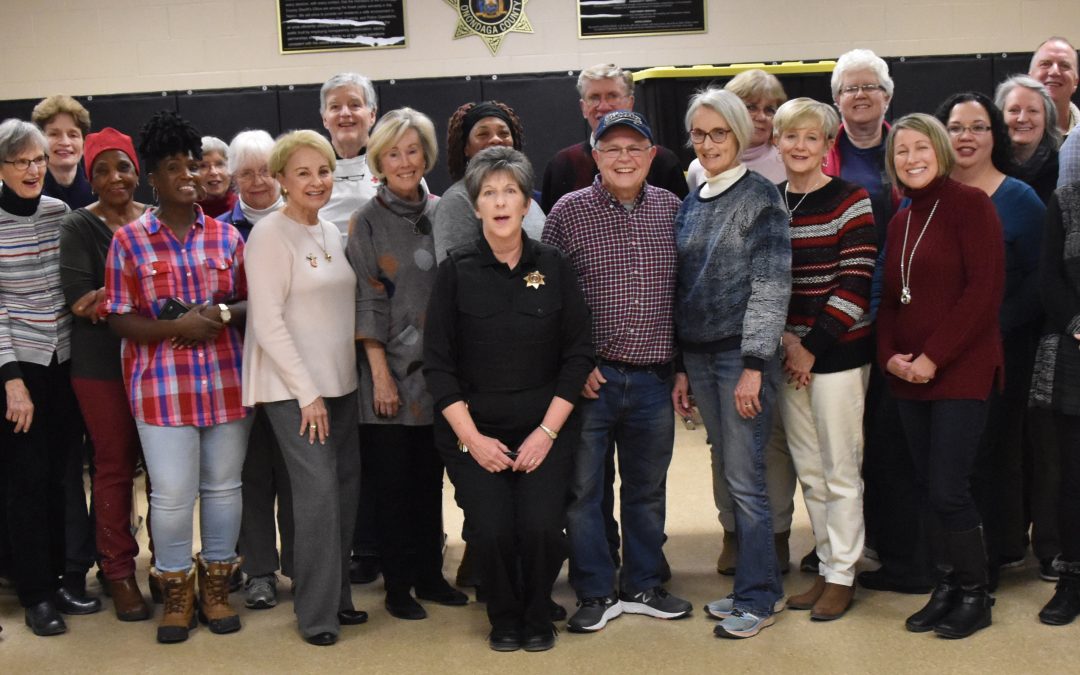 The volunteers gather for a photo to celebrate their completing of their gift packing; they completed the massive project in only about 40 minutes. (Sun photo | Tom Maguire)

‘You gotta be bold in your Christian faith,’ deputy says

It was suggested that filling goodie bags for inmates is a noble-minded pursuit at Christmastime.

“Well, I appreciate that but it feels more human-minded to me. Respect,” said Ellen Golden, visitor advocate for the Jail Ministry of the Brady Faith Center in Syracuse.

Yes, the Patrick J. Corbett Onondaga County Justice Center is where good people go at Christmastime. On Dec. 19, Golden and about 30 other people descended to the facility’s basement, where they filled little white paper bags for more than 500 inmates.

The volunteers were lined up at tables arranged in a horseshoe as the Sheriff’s Department pecking order gave way to the packing order. “We try to keep a good variety,” said Keith Cieplicki, Brady’s Jail Ministry coordinator.

The list for each bag: two hot chocolate packs; one Ramen noodle package; one yellow-green apple; one packet with prayer sheet, puzzle sheet, two folded lined paper sheets and two business envelopes; one stamped Christmas card; one pair of socks; one pen; one address book; two small chocolate bars and two bite-size chocolates; three hard candies; and one bag of three cookies. The items are donated by a lot of churches and various groups.

“I start really preparing in October,” Cieplicki said. “It takes us a total of about three months to get ready. … Over 10,000 items we gotta organize and get together, so … great little project.”

“Are we ready?” he asked his team of packers.

He assigned the starter’s duties to Sheriff’s Deputy Elaine Egan on behalf of her colleague Deputy Douglas Paninski, both of whom represented the custody-administration unit.

“Let’s roll!” Deputy Egan said, and immediately a tremendous rustling noise erupted as the white bags crinkled under the shower of treats. It was 30 or 40 minutes of “fun and frolic,” as Deputy Egan called it.

She said that on the next evening, Jail Ministry volunteers, accompanied by a deputy or a sergeant, would form groups of three and visit each section of the jail for about 15 or 20 minutes.

“And we sing carols, and we give out bags, and do prayer if they are in need of prayer,” Deputy Egan said.

Did she say “prayer”?

She answered: “I said ‘prayer.’ … God is everywhere, and if he says to say it, I say it. … Gotta step out, you gotta be bold in your Christian faith.”

So she knows who the boss is?

‘SHE TOOK A BOLD STEP’

At the hectic hot chocolate and Ramen noodles station, Paul DeFelice, of St. Augustine Church in Baldwinsville, related that one of his co-volunteers, Ginny Piccirilli, was asked by some of her friends: “Why are you volunteering at a jail ministry, why not do something else?”

“And she took a bold step and said ‘I’m coming here,’ and she’s back,” DeFelice said. “She asked to come back.”

Piccirilli, of St. Elizabeth Ann Seton Church in Baldwinsville, explained: “I like giving back to the community and I felt very good after leaving here last year to help out.”

Volunteer packer Colleen Pitts, also of St. Elizabeth Ann Seton, said she was enjoying the evening. Her late father was a sheriff’s deputy, so it was interesting to come to the justice center and see where he worked, she said.

Working at the station that plopped tiny flexible pens into the bags were the husband and wife team of Joe and Rose Stoll, from Erwin First United Methodist Church in Syracuse.

“Fourth year doing it,” Joe said. “It’s a highlight every year, and we made new friends here.”

Holding very steady amid the frenzy of packing was Father Peter Major, MHM, staffing the sock station. Asked why he participated, he said, “I guess to be in solidarity with the people here, not only in the jail but here at the tables. We’re all family here working for another family in solidarity, like Christmas — solidarity.” He said he trusted that God would touch the inmates’ hearts.

Also working at the sock station was Victoria Moore, bail coordinator/office manager for the Jail Ministry.

She said, “I love doing this every year. … As far as my holiday, I think it helps me spiritually. Yes. It really does.”

Asked how the inmates react, she said: “Ahhh, they love it. … I think this really gives them hope. It really does. They look forward to this.”

“It’s a tradition at this point,” said Bill Cuddy, the spiritual minister for the Jail Ministry. He’s been holding the event for 44 years.

“We always thought it was hard for people at Christmastime to miss home,” he said. “And we didn’t know if it’d go over. From the first instance we started this, people got outside themselves, got into singing the carols, sharing the gifts, laughter.”

Golden, the visitor advocate for Jail Ministry, said the inmates “react very enthusiastically, some with sadness. You’ll see tears, because they recognize that they won’t be with their families and friends for Christmas; and they have memories.” She has seen inmates sit right down and write a letter with the stationery supplied by the volunteers.

“Every human being deserves to be uplifted,” Cuddy said.

The volunteers gather for a photo to celebrate their completing of their gift packing; they completed the massive project in only about 40 minutes. (Sun photo | Tom Maguire)

Plenty of leftover candy was left for the deputies who work in the justice center. (Sun photo | Tom Maguire)