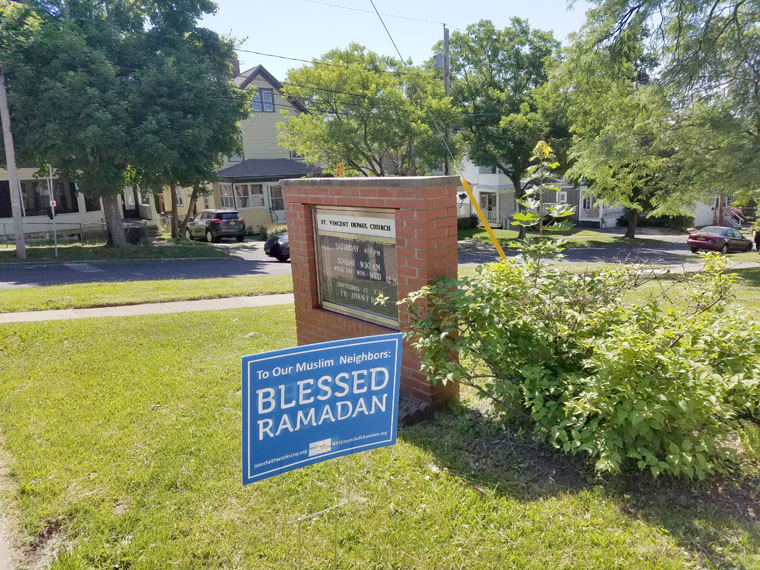 Islamic Society of Central New York member Maheer Azad, 20, was driving by a Syracuse church June 21 when he saw something on church property that made him turn around.

A sign planted in the ground said this: “To Our Muslim Neighbors: Blessed Ramadan.”

“I was driving a little bit fast, but that sign caught my eye,” Azad, a junior studying economics at Syracuse University, said at the Islamic Society the next night. “And actually, it made me really happy; it actually warmed my heart. … 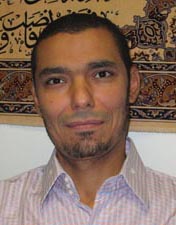 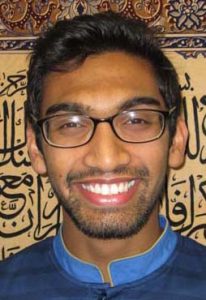 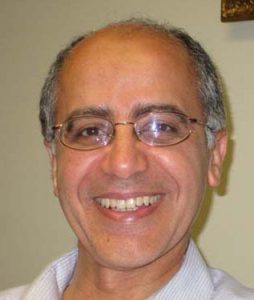 “I absolutely loved it. I kind of slowed my car down to make sure I read it right. I said, ‘Wait, does it say Ramadan on it?’ And I kind of braked the car, and I turned around and … I was like, Wow, for me personally, I find it very, very welcoming, I find it very heartwarming.

“And if I could have a chance to talk to them I would really express my gratitude to them for posting that sign because even though it’s a small sign, it still speaks volumes to me personally. It does.”

The signs also speak to the heart of Syracuse attorney Iman Abraham, who also is a member of the Comstock Avenue mosque.

Those who put the signs on their lawns, he said, are “wishing us a Blessed Ramadan out of the goodness of their heart.”

Father John F. Rose said he has received only positive comments, no negative ones, about the “Blessed Ramadan” sign he placed at St. Vincent de Paul Church, where he is the pastor. He ran the idea by the church trustees, “and they all thought it was a wonderful idea.”

“A parishioner came in the door and hugged me,” Father Rose said. “She said, ‘You are amazing for putting that sign up; that’s wonderful.’”

Father Rose also heard from a limo driver. “He said, ‘What you churches are doing is great, putting these Ramadan signs up,’” Father Rose said.

Father Rose is a member of the InterFaith Works of CNY Round Table of Faith Leaders. InterFaith Works and the New York State Council of Churches are encouraging people to display the lawn signs that honor Ramadan, the month of fasting for the practitioners of Islam.

Beth A. Broadway, President/CEO of InterFaith Works of CNY, explained the idea behind the signs in an email:

“In this time of vitriol and exclusion directed at Muslims, and in their time of fasting to get closer to God, it made sense for the rest of us, as a community, to show our support and love for them during this blessed time in their faith tradition.”

She added: “We designed the signs, and ordered 75 signs from a local print shop, to be placed in neighborhoods and in front of houses of worship. All the signs were taken! They will be in place in front of Catholic Churches, Jewish Temples, Episcopalian Parishes, and people’s homes until July 6th, when Ramadan ends.”

Syracuse resident Evelyn T. Kennenwood, a Quaker, heard about the Ramadan signs from InterFaith Works Round Table member Mark Briggs. She put one of the signs on her property, and she told this story:

“Last fall I met the young wife from a Somali family who has moved onto our street. She was out walking with two of her children and we introduced ourselves and chatted for a bit. Our paths did not cross again all winter.

“Last week as soon as my Blessed Ramadan sign came I placed it in my front yard. Two days later a friend who was stopping by announced to me, ‘There’s somebody outside who wants to talk to you.’

“I stepped outside and there they were, the same lovely woman and the two younger children I had already met, along with her husband and two older children. They shook my hand and then hugged me and were radiant with happiness. They were all smiling broadly and laughing with excitement about the sign. The husband said his wife had seen it first and came right home to tell him. The whole family had then returned to take a picture of it and to try to meet the people who lived there.

“We hugged and chatted some more, all of us bobbing in pleasure and excitement as we exchanged names and tried to remember them. As they left they announced they would send a specially prepared dish to me some evening the following week.

“I basked in the warmth of their pleasure and gratitude, and in the joy of human connection the rest of the day.”

The story mirrors the responses that Father Rose has been getting. He said the signs foster “a feeling that both religions [Catholicism and Islam] are about compassion and love and forgiveness and acceptance.”

Father Rose is also Director of Christ the King Retreat House and Conference Center in Syracuse, where about 50 people attended a Christian-Muslim dialogue earlier in June. “People were delighted that we had this conversation,” he said.

“I feel like this country’s come a long way,” SU student Azad said during his observance of Ramadan late on the evening of June 22 at the Comstock Avenue mosque.

Azad aims to be on Wall Street some day, working in marketing and finance. When he was a kid, Islam was attacked, he said, not in a direct way, but in an indirect way. “It’s not the people’s fault,” he said, citing the media for “portraying negative things.”

When he was a kid, he would also fast during Ramadan. “My friends would think that Ramadan was a month where we starve ourselves. We fast during the day, but they used to think that we used to fast for [a] whole month, not eat anything.”

In reality, Muslims fast from dawn until sunset during Ramadan.

Since he hit his teens, Azad said, he has “seen a growing awareness. People are really trying to understand what Ramadan truly is … and basically not just Ramadan, but Islam as a whole. And this I think is a great time of that, to be honest with you. I really, really like that.”

After talking for a few minutes, Azad excused himself to wash up in preparation for Ramadan prayers. The entire mosque shared the same kind of hospitality to a visitor after sundown, offering moist delicious cake and plenty of coffee. There was a great sense of bustle as everyone got ready for prayers led by visiting Imam Mohammed Elfiki.

Imam Elfiki is originally from Egypt. He is at the Comstock Avenue mosque for the month of Ramadan, and then he will return to Saudi Arabia, where he teaches English, health and safety, life skills, and presentation skills to high school graduates who are learning to become technicians.

The month of Ramadan, Imam Elfiki said, is a time for Muslims to be very spiritual. “We eat less, we have less worldly pleasure, and we worship more, we pray more, we read Qur’an more and more and more because it’s the month where Qur’an was first revealed to people.

“So what I do here is I myself [and a] few of us here, we lead the prayers, we read Qur’an, we read the Prophet’s [Muhammad’s] sayings.”

Imam Elfiki extolled Islam as a religion that promotes “the best of manners with everyone around.”

As one example, he said, “We urge all our fellow Muslims to be organ donors, because we believe in benefiting the whole community, whether Islam or not Islam.”

The virtues of Islam, he said, include sharing food, engaging in dialogue, making good use of the intellect, working hard, and being helpful.

“We believe that all souls are from Allah, from God, and they are all sacred,” Imam Elfiki said.

Also attending the Ramadan prayer evening on June 22 was Islamic Society of Central New York President Mohamad Khater. It is a volunteer position. In his secular life he is a software consultant. Like Imam Elfiki, he radiates a reverence for all people and a deep earnestness about religion.

He said, “It’s a wonderful thing. … Wonderful idea, because it’s sharing. … When people talk about it in churches, that’s a good thing.”

President Khater noted the commonalities of Christianity, Judaism, and Islam.

He said Muslims cannot be Muslims “without believing in the Old Testament and the New Testament, and the prophets.”

President Khater said Muslims believe there is only one God, and Islam shares the values of Judaism and Christianity.

“The common thing that we have is a lot more than the differences we have, as religious people,” he said.

In a letter to the InterFaith Works Round Table of Faith Leaders, Broadway said, “Our faiths are deepened and preserved as we work to protect the faith of all others in our community. Let us stand together.”