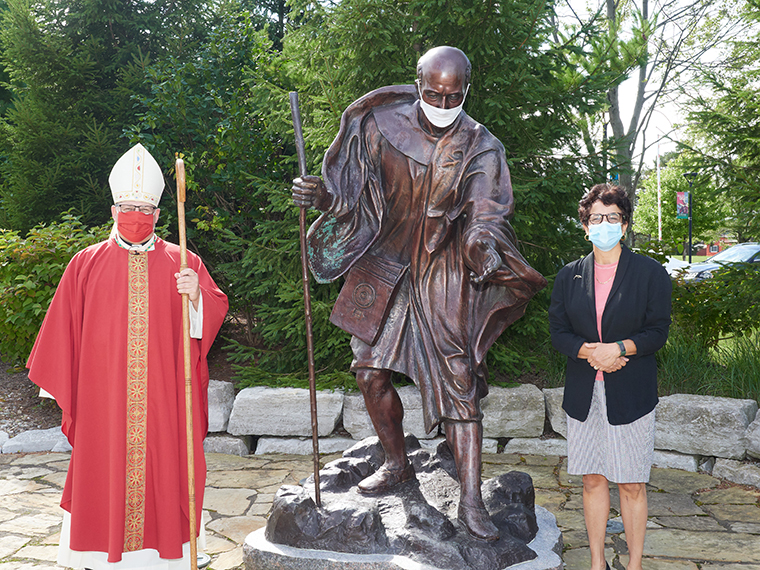 Le Moyne College president Linda LeMura compared this unusual year to the apostles’ experience in the Upper Room. “In this pandemic year 2020 it feels like we lived it,” she said during the college’s Sept. 3 Mass of the Holy Spirit. “The parallels are so obvious. The apostles breathing and afraid, barring the door against the danger outside. That sound familiar?”

“We’ve all spent time in the Upper Room this year. I know I have,” she told a small, socially distanced crowd at the Panasci Family Chapel. “The speed and scope of the lockdown last spring was like nothing any of us have ever experienced.”

LeMura suggested an alternative interpretation of the Upper Room story: “Suddenly isolated from friends and family, we found ways to stay together despite our physical separation,” she said. “We emailed, we zoomed, we typed, we texted. Some of us even actually wrote letters.”

The Le Moyne community “took care of one another,” she said. “Some working long shifts at hospitals and grocery stores and others by quietly ignoring the discomfort and inconvenience of staying alone.”

“We found that the things we missed most,” she said, and “the only things that really matter, are family, friends, kindness, generosity, dignity, decency, justice and inclusion, humanity.”

She suggested viewing this year “not as a lockdown or a quarantine but as a retreat” that allows “the time and the space to listen … to hear the gentle whisper that is the voice of God.”

The Mass — a tradition that dates to Medieval European universities seeking divine inspiration at the start of the academic year and the 75th at Le Moyne — came three days after classes started at the Jesuit college. Students had not been on campus since they left March 6 for spring break. As COVID-19 death rates increased alarmingly across the United States, the college moved instruction online and postponed commencement.

Le Moyne will end in-person classes before Thanksgiving and will hold finals remotely. Professors are using a mix of in-person and remote learning. The college has implemented safety measures, and students have committed to the “Dolphins Declaration,” agreeing to protect themselves, others, and the community.

The document says, in part: “Students who do not adhere to the Declaration will be considered to have violated the College’s Community Standards and may be subject to consequences including revocation of specified campus privileges, removal from campus housing, removal from in-person classes, and possibly a formal disciplinary board hearing that could result in suspension or expulsion.”

As of Sept. 8, the college reported 3 COVID-19 cases, 1 recovered case, 1 person in isolation, and 21 in mandatory quarantine. The college has not dismissed or suspended any students for violating safety measures, but has placed six students on disciplinary probation, according to a Le Moyne official.

In his homily, Bishop Lucia compared navigating the pandemic to driving a car. “When we’re parked sometimes we might feel stuck,” he said. “And sometimes going forward means we have to put ourselves in reverse a little bit. We need to reverse. We need to take a step back.”

Since March, “We’ve been actually asked to take time to step back, but hopefully it hasn’t been fruitless,” he said. Hopefully, he said, the last six months have allowed people to learn “about ourselves and about our society.”

The period also reminds people “we don’t always have to just keep going full throttle,” he said. “When you’re in the car, your passenger is God. Sometimes you might let him be the driver. And as we then go forward, we just need to remember that we’re not going out alone.”

The Feast of St. Ignatius Loyola, July 31, marked the creation of a new Jesuit province that includes Le Moyne College. The USA East Province of the Jesuits (UAE) combines the former Maryland and Northeast Provinces into the UAE Province.

St. Ignatius of Loyola, a Spanish priest, founded the Society of Jesus — or the Jesuits — in 1540. An 8-foot bronze statue of St. Ignatius stands next to the Panasci Family Chapel at Le Moyne, located in the former Northeast Province.

The new UAE Province extends from Maine to Georgia. It is the largest province in Canada and the United States, with more than 600 Jesuit priests and brothers, 11 colleges and universities, 26 middle and high schools, 17 parishes, 6 retreat centers, and 2 international schools, according to Jesuit Magazine.

Father O’Keefe, a native of Boston, was ordained in 1986. He previously taught at Boston College, Georgetown University, and Fordham.

About 16 Jesuits now live at Le Moyne College and the St. Andrew Hall, the Jesuit novitiate for the region, at Le Moyne. The college, founded in 1941, is one of 27 Jesuit colleges and universities in the United States.