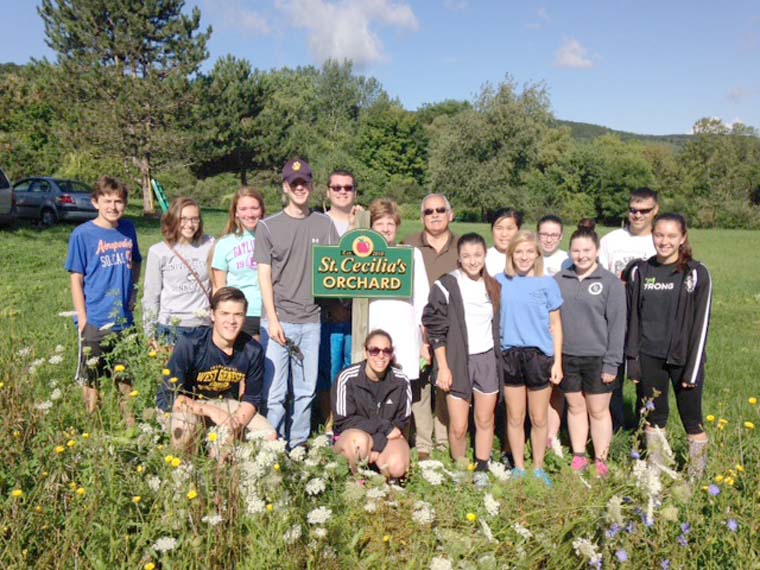 Fresh produce grown by schools and parishes helps others

Throughout the Diocese of Syracuse, parishes and schools are going green and doing their parts to help their communities and the environment. Here is a look at some of the wonderful ways people are giving back, helping others and keeping the planet healthy.

“It’s fun,” she said, giggling as she pointed to several rows of towering corn stalks swaying in the summer breeze. “People get lost a lot in the rows when they pick it and it’s funny.” Gabby is one of several children in the Phoenix/Pennellville area helping to harvest vegetables that will benefit the food pantry at St. Stephen’s Parish. “Last year I just got to water the garden, but this year I get to pick too,” Gabby stated proudly.

The garden, located on an acre of farmland donated by Earl and Mary Chesbro of Pennellville, began as an idea of St. Stephen’s youth minister, A.C. Bowman, nephew to the Chesbros. Bowman, an auto parts sales manager, and his brother, Tom Button, both grew up on a local farm and now work with the kids from St. Stephen’s youth group to plant, water and harvest the garden.

“A.C. came up with the idea last year to create a garden to help the church,” stated Button. “This is the second year we’ve been working with the kids and everything we grow is organic. We start planting in April and the garden keeps on producing right through October. It’s great that the produce goes to help the food pantry, but for me, I love coming out and enjoying the peace and quiet of the farm.”

Watching the kids harvest the produce that will help others is one of Bowman’s greatest joys.
“This year has been a great year,” stated Bowman. “We produced almost seven times the amount of vegetables that we had last year. We already donated a couple of hundred pounds of tomatoes, 200 pounds of potatoes and we are expecting to donate about 250 pounds of corn and 400 pounds of zucchini and squash to the food pantry. I’m so proud of the garden and so proud of the kids. They come out here and work hard.”

Madison Gaca, 12, laughed as she kneeled on the ground to dig up potatoes next to her friend, Summer Koegl, 11.
“I like to harvest,” said Madison. “It’s good community service to do this and it’s for a good cause, too. There are a lot of people who really need this food so it’s good to help, and it’s fun to grow things.”

Bowman agrees. “It’s great to watch the kids get excited when they harvest what they’ve grown and the garden really brings the community together. I am so grateful to my aunt and uncle for donating the land. They’re not part of the [St. Stephen’s] parish, but they just wanted to give back. I hope that there will be more parishes in the future that will look to create gardens like this to help out the food pantries.”

Teens learn to “reap what is sown”

In 2010, a group of teens and adults from St. Cecilia’s Parish in Solvay planted, staked and tied 100 apple trees at Matthew 25 Farm in Vesper. After completing their hard work for the day, the group gathered around the last tree and prayed to God that someday the trees would produce fruit that could be given to food pantries in the area.

Over the next five years, due to several challenges, the trees did not bear fruit. But on Aug. 5, the first crop of Pristine apples were harvested by members of St. Cecilia’s and the youth ministry group from St. Charles-St. Ann’s Parish in Syracuse. The group picked 405 pounds of apples that were later donated to Assumption Food Pantry and St. Lucy’s Food Pantry, both in Syracuse. Before leaving the farm, the group once again prayed together in thanksgiving to God for allowing the group the opportunity to feed those in need.

The John Connelly Memorial Garden is located in the backyard of St. James School in Johnson City, adjacent to the church. This year the community garden has already produced a bumper crop of squash, beets, potatoes, beans, lettuce and kale, with more vegetables ready for harvesting every day. Much of the produce grown is given to the St. James Food Pantry, which is part of the Community Hunger Outreach Warehouse (CHOW) network in Broome County.

The garden was started last year by St. James Youth Minister Lynette Errante with a $4,000 Catholic Campaign for Human Development grant from Catholic Charities. Working with students, school staff and volunteers in the community, Errante created a 104-by-40 foot, 14-bed garden. “This year the garden has been amazing,” stated Errante. “We’ve already given approximately 165 pounds of produce to the food pantry.”

Errante has been around gardens her whole life and has a nutritional background. Not only is she proud that the garden helps those in need at the food pantry, she also enjoys seeing the St. James students become involved with the growing and harvesting of the garden.

“I work in the garden twice a week during the summer with a core group of families who help pick the harvest,” explained Errante. “During the school year the St. James Gardening Club helps out and so do students in the different grades. We also have a composting program for the garden, using the waste from school lunches. It’s a real group effort.”

Errante would like to see the program expand further to offer nutritional recipes in both English and Spanish to the food pantry in order to help those who receive the produce learn how to best prepare and enjoy it.

“It’s such a neat program and it’s been great to see how the kids understand that the work they do for the garden goes to ultimately help others in the community,” stated Errante.

Last year, Gunnar Glover, 18, then a senior at Seton Catholic Central High School, was discussing with a friend ways to increase sustainability education and awareness.

“We realized if we created a compostable system to reduce waste, we could complete the food cycle by creating a garden at the school and reusing the waste as fertilizer,” explained Glover, now a freshman majoring in biology at Cornell University.

Glover, along with support from faculty and students, created a Sustainability Club at Seton last winter and organized a comprehensive waste-composting program. The program utilized more than 400 pounds of kitchen food waste from students and faculty, equivalent to one ton of food, and also composted hundreds of pounds of leaves collected from the school grounds. The club received a $500 grant through the Green School Grant Program of the New York State Association for Reduction, Reuse and Recycling; a $500 grant from the Broome County Farm Bureau; and a grant through Coca-Cola’s Keep America Beautiful program for additional recycling bins to be used throughout all the Catholic Schools of Broome County.

This past spring, the compost was used as fertilizer in a 6-foot-by-14-foot raised bed garden located behind the high school. Students helped harvest the garden this summer, gathering baskets of lettuce, carrots, squash, beans, cabbage, beets, Swiss chard, beans, kale and more, which was donated to local food banks in the Binghamton area. The garden will continue yielding produce through the fall, which will also be donated to area food banks.

Although Glover is pursing new interests at college, it is his hope that Seton’s Sustainability Club, the composting program and the garden will continue to flourish for years to come, not just at the high school, but at the elementary school level as well.

“We had mini science classes and health classes out in the garden and it was a great experience for students to see how all the work connects back to practical education and promotes the value of recycling, local farming and reducing waste,” stated Glover.