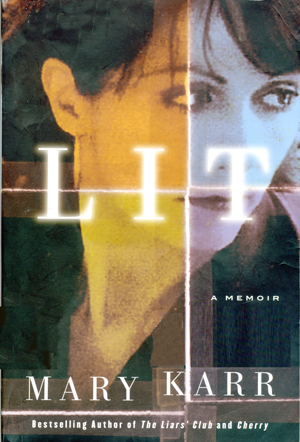 Mary Karr’s newest memoir, Lit, takes the reader on a ride navigated by a true drunk driver. Karr spent her youth in a Texas oil town with an older sister and parents who drank like every day was Saturday night.  This is Karr’s third memoir — the first two being the best-sellers Liar’s Club and Cherry.

This latest one is different though. In Lit, Karr not only describes her descent into the same alcoholism she ran from as a teenager, but also her awakening on the other side of that sepia rainbow. The book also enlightens with Karr’s new-found love: Catholicism. The church has gained a powerful addition in Karr and in her latest book.

A professor in the English department at Syracuse University for 17 years, Karr is a skilled storyteller of her own stories and this latest one is a doozy. In Lit, Karr takes the reader through her college experience which was tinged with drinking binges. It describes her marriage to an academic, which might have survived were it not for her alcoholism and the changes brought about by her recovery. Her ex-husband came from a different world. His parents were wealthy and ate using the correct silverware for the correct course — a stark contrast from Karr’s own upbringing.

She described her first dinner at her impending in-laws:
“Evening finds us seated at the long glossy table, half the length of a bowling alley, where his parents sit at opposite ends — his father portly in a tweed jacket with patched elbows; his mother blond and thin as a greyhound, smiling.”

Karr compares that visit to what is going on at the time in her own family. She writes, “Just that month, Daddy had suffered a stroke drinking at the VFW bar, toppling off a bar stool. He’s still alive but paralyzed and speechless, barely aware that Mother’s popping valium like pop-tarts.”

Karr and her ex-husband were brought together by the poetry they love so much. He chose poetry over the parlance of law school, a route his parents would have preferred. Karr writes about the differences in their backgrounds not with scorn, but with the understanding that they happened to come from different places. She doesn’t write bitterly of her ex; she even wanders through their early love with a clear amazement that he loved her back.

The birth of their son is an obvious bright spot. Karr tells the reader about her first feelings of motherhood after her son Dev was born: “Never have I felt such blazing focus for another living creature. I can’t stop looking at him. Joy it is, which I’ve never known before, only pleasure or excitement. Joy is a different thing, because its focus exists outside the self — delight in something external, not satisfaction of some inner craving.”

Karr’s own motherhood provided a new window with which to look at her relationship with her own mother. Lit revels in her mother’s sobriety which finally comes well into Karr’s adulthood. She describes in bittersweet detail her sober mother’s hand at being a grandmother to Dev.

“I tiptoe downstairs to see Mother cradling Dev, saying, Old Blue Eyes, that’s what Grandma Charlie’s gonna call you. And when you get ready, you come down. You ain’t never had no fun till you get to my house…”

At the same time she is happy that her new and improved mother is there for her, Karr faces her own addiction. She lived in Cambridge, Mass. with her husband and young son at the time. Wine and cocktails were part and parcel of the lifestyle when Karr was a young wife and mother. It seemed innocent enough to drink a bottle of wine while she put the pot roast together. It was another story when Karr came face to face with being a mother who drank every day. She wrote in the introduction of Lit:

“Then I started drinking every day and stopped breastfeeding, and tonight, while holding the bottle to his working mouth, I averted my eyes for fear he’d see the gutshot animal I’m morphing into, which mirrors the mother I fled to keep from becoming, the one who shoved me off — Don’t bug me, you’re making me hot her tagline.”

Karr’s mother was an artist and a creative woman who couldn’t find the inclination to be a good parent. A final count of her mother’s marriages, two to Karr’s father, Pete Karr, ends at seven. By the end of Lit Karr reconciled with her mother, accepting her flaws and loving her all the same.

Karr described her own descent which included a close call in her car while driving drunk, a stint in a hospital where she found solace in prayers even though she had no confidence regarding their outcome. She prayed because it comforted her and awakened something dormant inside.

She and her husband moved to Syracuse when she accepted a position at S.U. The book describes Karr’s apprehension about leaving the circle of friends she wove together in Cambridge during her early days of sobriety.

Karr had met writers Tobias Wolff and his brother Geoffrey at a graduate school program in Vermont years earlier. They kept in touch and once in Syracuse, Karr reconnected with Tobias Wolff and found a new circle of friends to help keep her head clear.

She and her husband eventually divorced but it was thankfully a friendly break and they managed to parent Dev together. Karr writes about staying sober and searching for romance while keeping  her practice of thanking God for her blessings big and small, and taking stock of her experiences at the end of each day. Her romances include the writer David Foster Wallace, a friend from her days in Cambridge and her early sobriety. The relationship was volatile though, and Karr wasn’t ready to bring her son and her beau together when her divorce was still fresh.

It is in Syracuse as a single mom where Karr and her son go on what she describes as “God-o-rama” searching for a church to belong to. Dev asked if she’d take him to church and when Karr asked him why his child-like answer was “To see if God’s there.” Karr didn’t have a good response to his answer so got herself up off the sofa and out to church. They visited all types of places of worship in search of the God Dev wanted to find.

Finally, it was her good friend Tobias Wolff who invited them to his Catholic church. Wolff is Karr’s godfather. It isn’t so much the Mass and the prayers that attracted Karr at first, but the people there who she describes as “real.” Karr was as surprised as anyone else to find herself and her son becoming part of the now-closed St. Andrew the Apostle Church.

The church’s pastor Father Joseph Kane, now retired, kept a steady course with Karr, answering her questions as they inevitably came. She is still close to Father Kane and visits him often. It was Father Kane who shepherded Karr through the doors of the church, sometimes through her protests.

In Lit Karr writes of one of the challenges she posed to Father Kane and part of his response was “God’s after you. Struggle all you want.”

“He told me God was going to get me and He did,” Karr said. It was Father Kane who baptized mother and son.

“I saw the faith of the people at that church,” Karr said. “They worked with the poor and gave of themselves and I found that very moving. If you would’ve told me I’d be saying the rosary and going to Mass, I would have laughed myself cockeyed.”

Now, she has written Lit and a significant part of the book concerns her faith and finally the Catholic Church. She followed the Ignatian Exercises and shared her spiritual life with her director, Sister Marise May, OSF.  Karr is very grateful to her spiritual guides for their help and st
eering as she is still traveling. She listens to downloads from www.prayasyougo.com on her Ipod while she exercises on her treadmill.

The days of worrying over mortgage payments while riding the bus to work are over. Karr’s faith has brought her mercy and forgiveness, as well as a firm commitment to pray before making major decisions, including which book to write first even though one may offer a nice, juicy advance.

Karr chose to publish a book of poetry aptly titled Sinners Welcome, (named from the sign that hung outside St. Lucy’s Church), before she launched into producing her latest memoir. She doesn’t regret that decision even though Dev’s tuition was looming and the advance for a memoir would have been nice. “I figured if it was my money, it would come back to me,” Karr said in a recent interview with The Catholic SUN.

Karr labels her early connection with Jesus “dubious,” but these days she is devout with her prayer life.

“I pray for a lot of intentions, for people living and dead,” Karr said. “In the morning I ask for God’s help. I practice some breathing and try to get into the presence of God, meditate on the liturgy of the day. I say the Our Father, the Prayer of St. Francis and the rosary, sometimes the Divine Mercy Chaplet. At night, I review my day and present myself to Christ.”

She said she doesn’t really have the same stories that a lapsed or even a cradle Catholic might have.

“People think they know a lot about the Catholic Church by bad experiences they’ve had or heard about, or by the dogma or the way it looks from the outside,” Karr said. “I haven’t had that experience. I’ve received a lot of forgiveness and mercy. I’ve learned a lot and I’ve found the mercy of the church in my own sinfulness.”

Karr knows delving into her Catholic faith in her latest book might not be a crowd-pleaser. She does it with complete honesty and an openness that is refreshing and personal. Lit is not always a tidy story with all the loose ends tied up, but it is a compelling story. Karr shares her humanity and the discovery of her Truth, which she finds with the help of the Catholic Church.

“I’ve been saying that writing about faith for a secular audience is like performing a card trick over the radio,” Karr explains.

Hopefully, this time readers will see that she has laid all her cards on the table.

Lit, published by Harper Collins, will be released Nov. 3.