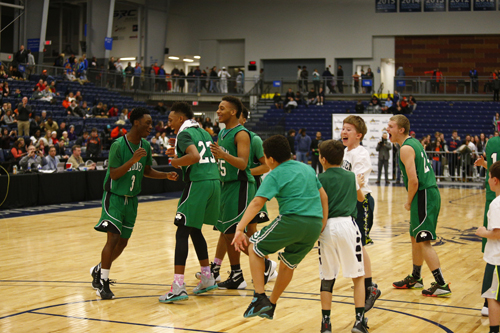 Rewinding a year, Bishop Ludden rallied back to survive a thriller against Nottingham. With that win, they advanced to play Henninger in the section finals. Ludden lost that game to Henninger by 8. That loss made Bishop Ludden hungry to finish what they had started last year. Bishop Ludden steamrolled through the regular season and right back to the sectional finals, for a date with Liverpool this time.

Ludden came out of the gates quick behind several buckets from Chris Allen and Jim Grabowski. Two minutes into the game, Liverpool guard Tyler Sullivan went down with an ankle injury. He returned to the game for several possessions deep in the second quarter, but it was obvious he wasn’t himself. Ludden continued to keep its foot on the gas pedal, and never looked back.

Ludden was able to keep the lead in double digits for the majority of the game. However, Liverpool clawed back into the game, getting the lead to single digits. Ludden fired back behind three steals by Mika Adams-Woods and a real pretty up-and-under floater by Matt Hosek. This gave Ludden the momentum needed to sprint to their fourth section championship in the last five years.

Ludden moves on to face the winner of Green Tech and Shenendehowa March 5 at Hudson Valley Community College.