March for Life steps off in Syracuse 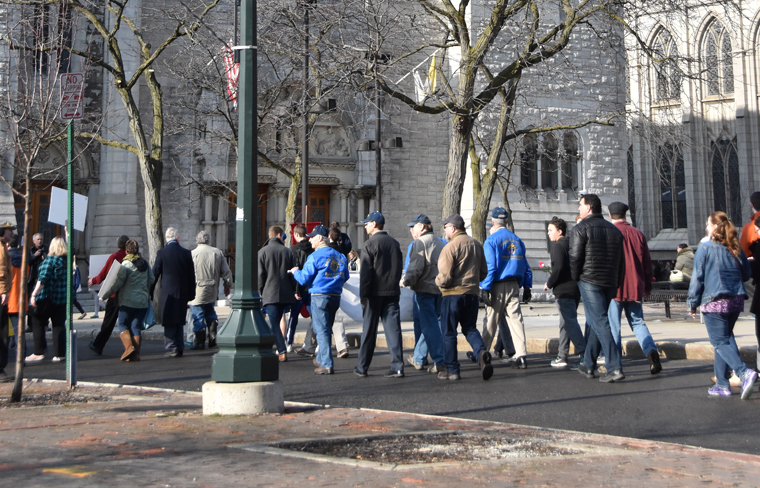 Hundreds of people marched through downtown Syracuse Jan. 21, demonstrating against abortion and witnessing to the value of all human life.

Sponsored by the Syracuse Right to Life Association, the annual Syracuse March for Life marks the anniversary of the U.S. Supreme Court’s 1973 Roe v. Wade decision legalizing abortion. It was held in advance of the national March for Life, which will take place in Washington, DC, on Jan. 27, and on the first full day of the “new pro-life friendly President Trump Administration in Washington,” according to a release from the group.

The Syracuse march, which Syracuse Right to Life President Christina Fadden Fitch said is the longest-running local pro-life march in the state, drew marchers of many ages and denominations and included families, clergy, and elected officials.

“For thousands of years, doctors have been guided by the Hippocratic Oath that states, ‘I will neither give a deadly drug to anyone who asked for it, nor will I make a suggestion to this effect,’” O’Brien said. “Assisted suicide is fundamentally incompatible with my role as a healer to do no harm. Allowing doctors to assist in killing threatens to corrupt the profession of medicine.

“I’ve taken care of patients for over 30 years. I’ve counseled them through many difficulties and they’ve grown to trust me. For me to assist a patient in their suicide would undermine the trust and respect society has grown to expect from physicians,” he said.

Following his remarks, Dr. O’Brien summed up for the Sun why he wanted to participate in the event: “People have to be aware that life is important and sacred and there’s inherent worth from the moment of conception until the moment of natural death,” he said.

Father James Schultz, administrator of St. Anne, Mother of Mary Parish in Mexico and Christ Our Light Parish in Pulaski, was among the marchers. As a priest, he feels like he should always be doing more, he said, and so he took the opportunity to join the local march. People have been increasing their prayer for pro-life changes, he noted, and “now is a time to keep that prayer going more and more.”