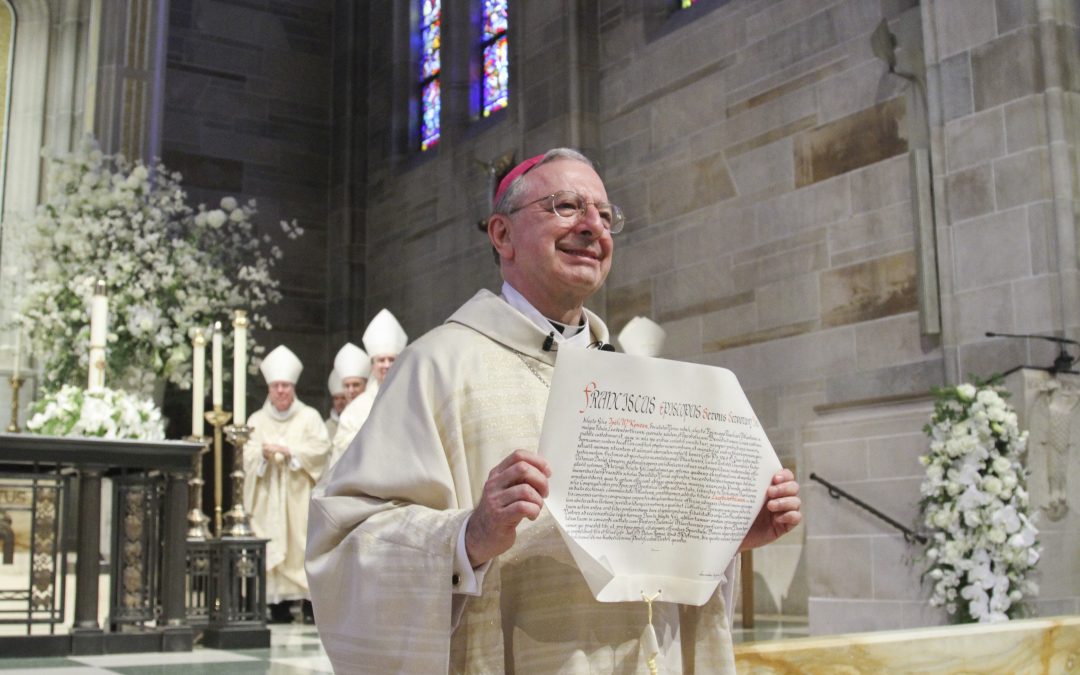 ATLANTA (CNS) — Having chosen “Be merciful, and with a cheerful heart,” as his episcopal motto, Bishop Joel M. Konzen, was ordained an auxiliary bishop for the Archdiocese of Atlanta April 3 at the Cathedral of Christ the King.

Bishop Konzen, 67, a Marist priest, served as teacher, principal and president at the independent Marist School in Atlanta for about 28 years. In February, Pope Francis appointed him as an auxiliary bishop of Atlanta, seven months after Bishop Luis R. Zarama, former Atlanta auxiliary, was named the bishop of Raleigh, North Carolina.

More than 113 priests, along with deacons, seminarians, religious and members of the Marist community, attended the Mass. Archbishop Thomas J. Rodi of Mobile, Alabama, and Bishop Bernard E. Shlesinger III, auxiliary bishop of Atlanta, were co-consecrators with Atlanta Archbishop Wilton D. Gregory in laying on of hands and invoking of the Holy Spirit.

In his homily, Archbishop Gregory said Bishop Konzen brought many gifts to his new role. He also pointed out that the local church has been blessed with clergy of exceptional dedication and zeal, a quality of faith frequently affirmed by the pope.

“Your appointment is another expression of the affection that the successor of Peter has for this local church. We could not be more grateful to Pope Francis,” the archbishop told the bishop-designate.

The duties of the episcopacy are three-fold: governing, teaching and sanctifying, said Archbishop Gregory. He added that Bishop Konzen will draw upon his experiences and his Marist religious heritage in the new role.

“Being a bishop involves making important decisions that may be difficult at times, but these must always come from a heart that desires the church to be gathered in communion with one another and in Christ,” Archbishop Gregory said.

He said that the bishop’s extensive ministry in education prepares him well for the duties of being a teacher of the church’s doctrine and discipline.

“Working in the classroom with young people has given you a taste of the joy, and at times, the headaches of attempting to help people understand and to accept life’s lessons,” he said. “Our church’s teachings must never be presented as abstract facts, but vehicles to provide insight and inspiration in how to follow the risen Christ.”

At the end of the Mass, the newly ordained bishop told the congregation it was “a remarkable sight to see all of you here together in this one place. And to think that it’s not my funeral.”

He extended his gratitude to Pope Francis and Archbishop Pierre and thanked Archbishop Gregory and the Society of Mary for their support.

“The ring that I was given this afternoon and the pectoral crosses that I wear, including one that belonged to Cardinal (Joseph) Bernardin, the first auxiliary bishop of Atlanta, are gifts from Archbishop Gregory,” he shared. “The crosier I’m using is a gift from Msgr. (Francis) McNamee and all at the Cathedral of Christ the King.”

He said he “looked forward to serving all of the people — old and young and in between — in the Archdiocese of Atlanta and to proving worthy of the apostolic trust invested in me.”

Two women in the congregation, Dee Lane Eades and Maryann O’Connor, were graduates of Marist School excited to witness the ordination of the school’s former leader. Eades, a 1979 graduate of Marist School, is president of its alumni association.

She said then-Father Konzen was very involved in the association’s activities. She also described him as “one of the most learned men I know.”

O’Connor is a member of Marist’s class of 1987. One of her sons currently attends Marist, and another is a graduate of the school. When she attended, she had Father Konzen as an English teacher.

“He was the hardest teacher I ever had,” O’Connor said.

But that’s not all she remembers. “He was great,” she said. “I think he’s personable. He’s got a great sense of humor.”

Contributing to this report was Michael Alexander. Golden is a reporter and Alexander is a photographer at the Georgia Bulletin, archdiocesan newspaper of Atlanta.