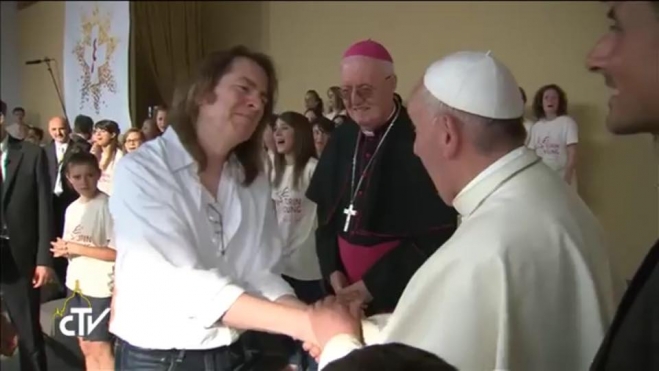 Bob Halligan Jr. says he doesn’t need anything else now that he’s met Pope Francis.
The Syracuse resident, music veteran and founder and lead vocalist of international Celtic rock band Ceili Rain, was invited to perform in June at events surrounding the exposition of the Shroud of Turin and Pope Francis’ visit to the Italian city of the same name. A passionate Catholic, Halligan performed for thousands gathered in Turin’s Piazza Vittorio for Eucharistic Adoration June 20 and for thousands more the following day in advance of an address by the pope. His prayers were answered later that afternoon, when he unexpectedly got to spend a moment with the Holy Father.
The Sun caught up with Halligan soon after his return to Syracuse to find out more about his once-in-a-lifetime experience.

Invited through a longstanding relationship with Hope Music, Halligan was the only American performer to take the stage at the June 20 festival. He did “Stomp,” a driving Ceili Rain tune, for a crowd he estimated to number about 60,000.

Pope Francis arrived after the performances were over, giving an address to the crowd as Halligan and the other performers sat on the stage.

Security personnel lined up in front of him, Halligan recalled, “but God is so good…. It’s like the Red Sea parts. For probably 70 percent of his address, I could see him perfectly.”

“It was so incredible because he’s so normal!” Halligan continued. “He’s so chill. He’s just a guy sitting there, visiting with us. He’s not proclaiming, he’s not a master thespian, he’s just a guy — though obviously a very learned guy and a very holy guy. But when he got passionate — it’s not fire and brimstone, he’s just so psyched that he puts his all into it. It was just amazing to be that close to [the man] who I consider to be the greatest man on the face of the earth in my lifetime.”

In an interview with syracuse.com before his departure, Halligan said he’d be angling for a handshake and photo op with the pontiff. Reading his words later, though, he had a change of heart.

After the pope’s address, Halligan’s fellow performers and other VIPs lined up to greet the Holy Father, but Halligan stayed in his seat. A friend from Hope Music took his hand and pulled him into the line.

Soon, Halligan was standing face-to-face and hand-in-hand with the pope.

“I talked with my wife Linda before I went about what I might say to him. Linda always schools me and makes sure I get my mind right,” Halligan said. “I was led to understand his English was sketchy — so I shook his hand, got up close to him, and I said, ‘Stati Uniti loves you very much.’ I wanted to start with two Italian words so he knew I was meeting him halfway. I wanted it to be ‘thank you.’ I ended with, ‘Grazie signore.’”

“He spoke to me and nerves and noise prevented those words from entering these ears. But I can deduce from what I heard him say at the end kind of what he said: He says, ‘Remember me, please,’ which I took to mean, ‘pray for me, encourage me.’ My face is quivering at this point. And I said, ‘Always.’”

Back in his seat, Halligan said he “cried uncontrollably for three or four minutes, I was so overwhelmed. I couldn’t believe this happened to me. Words don’t really measure up to how I felt and how I still feel.”

Scroll below to see video from Halligan’s moment with the Holy Father.