Men’s conference to be held in Syracuse 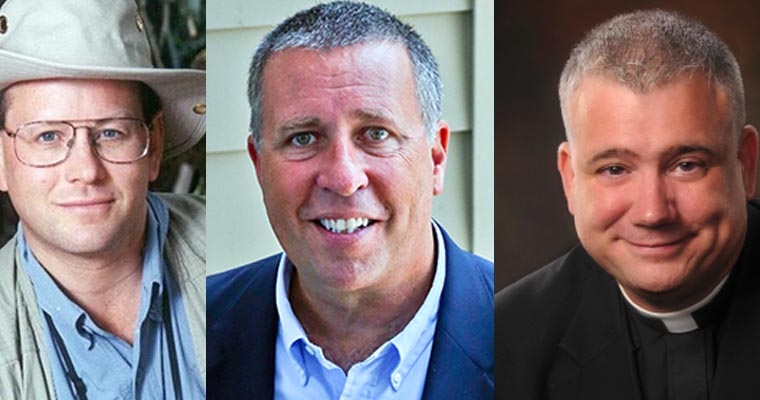 The seventh annual IGNITE Catholic Men’s Conference will be held on March 21 at Onondaga Community College’s SRC Center in Syracuse. The theme for IGNITE 2015 is “Rise Up. Be Strong. You Are Sent.”

“The conference offers men a way to get closer to Christ,” said IGNITE committee member Tom Gilhooly. “It gives them a full day to focus on Christ and gives a purpose to their lives.”

Gilhooly has been involved with IGNITE since 2009. He finds the experience to be fulfilling. “It refocuses my priorities,” explained Gilhooly. “And a lot of the men appreciate the opportunity to do that.”

Last year, close to 900 men attended the conference and Gilhooly said the organizers are hoping that 1,000 men will attend this year. Those who attend represent a wide range of ages.

The event will be held from 8 a.m. to 5 p.m. After registration, Mass will be celebrated by Bishop Robert J. Cunningham at 9 a.m.

Besides offering inspirational fellowship, the conference will also feature three speakers who will motivate men to strengthen their relationship with the Lord and to share their faith with others.

“We have a good variety of speakers who will address different aspects of our theme,” commented Gilhooly.

Father Larry Richards is returning to Syracuse this year after speaking at the 2010 IGNITE Conference. When asked why he choose to return again to Syracuse he replied, “I am always happy to speak to men about being who God created them to be — men of prayer and men of love.”

In addition, the conference will feature vendors and an opportunity for participants to receive the Sacrament of Reconciliation. “Hundreds of men attend confession,” remarked Gilhooly. “It’s a spiritual refresher and a recharge.”

Richard Sanguinito, IGNITE planning committee member and parish captain coordinator for the Southern Region, has attended the past six IGNITE conferences. He is encouraged by the fellowship offered by IGNITE. “This is an awesome opportunity for Catholic men to worship together,” said Sanguinito. “It is refreshing to see faces you know in the community that you did not know were Catholic. I find that this conference brings awareness that there is a community of Catholic men to support you and for you to support the Catholic men’s community.”

Men’s ministry is very important part of Sanguinito’s life. “As a Catholic man, there are three primary responsibilities: first is God — He asks to have a personal relationship with each man,” Sanguinito explained. “Second is family — it is the man’s responsibility to foster his wife’s and children’s relationship with God by setting an example of his relationship with Him. Third is community — each night ask yourself, ‘What have I done to promote God’s kingdom on earth today?’”

Sanguinito has been spreading the word about the upcoming conference in the Southern Region and he said the response from men has been good. “I try to remind them of the date and of their experiences at IGNITE and to ask others to join,” he said. He added that this was the second year that his region had been able to raise money for bus transportation to the conference. Next year they hope to provide two busses for the trip.

For more information about

IGNITE or to register, visit www.ignitecatholicmen.org.

Curtis Martin is the President and Founder of FOCUS, the Fellowship of Catholic University Students, one of the fastest growing movements in the Catholic Church. In reflecting on the work of FOCUS, Timothy Cardinal Dolan stated, “If you’re looking for hope, look to FOCUS.”
Whether he is on college campuses or television, at conferences or working with corporate America, Martin is an award-winning and proven dynamic speaker who has the ability to help his audience discover a vision for life.
In 2011, Pope Benedict XVI appointed Martin as a Consulter to the Pontifical Council of the New Evangelization. He holds a master’s degree in theology, is the author of the best-selling book Made for More and is co-host of the new ground-breaking show on EWTN, “Crossing the Goal.” In 2004, Martin and his wife Michaelann were awarded the Benemerenti Medal by Pope John Paul II for their outstanding service to the Church. Curtis and Michaelann live in Westminster, Colo. They are blessed by God with eight children.

Steve Ray is an intrepid traveler, expert on the Holy Land, Popular Catholic apologist, documentary producer, Bible teacher and best-selling author. Ray is one of the most fascinating Catholic speakers around and is appropriately dubbed “Jerusalem Jones” by the National Catholic Register. Ray filmed the life of St. Paul in six countries and will share the riches of the Bible and the lands in which St. Paul traveled. Ray’s popular film series “The Footprints of God” has inspired and enriched the faith of thousands around the world.

A gifted and captivating speaker, preacher, retreat master and author, Father Larry Richards holds the answer to some of life’s most profound questions. He speaks from experience as a pastor of an inner city parish, a high school chaplain, a counselor and an evangelist. Father Richards has directed hundreds of retreats, parish missions and conferences for young and old alike. His inspirational talks and presentations, always authentic and enthusiastic, have changed the hearts, minds, and lives of millions of listeners worldwide. He continues to accept invitations for speaking engagements all over the United States and in Canada and has recently traveled abroad to continue his mission of evangelization.