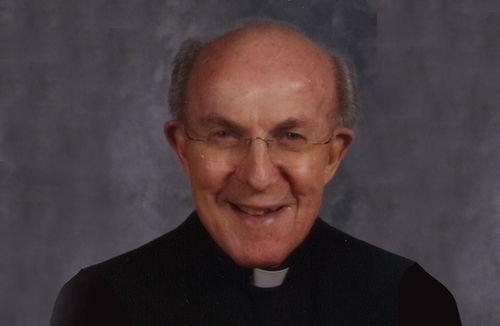 Since his retirement in 1995 after nearly 50 years of priesthood, Msgr. James McCloskey has resided at Immaculate Conception Parish in Fayetteville. He’s done much in and for that faith community over the last two decades, and evidence of the parish’s affection for him is everywhere: The street leading to the parish is named Msgr. McCloskey Way. A plaque beside the Shrine of the Holy Family at the church notes it was dedicated in his honor on the occasion of his 90th birthday, a gift “lovingly donated by the parishioners of Immaculate Conception Church.” Cards and gifts from his 95th birthday celebration, just marked in April, fill his living quarters, along with photos of parishioners and a computer printout banner reading, “We love you monsignor” from Immaculate Conception School students past. The school also recently launched a tuition assistance fund named the Monsignor James McCloskey Education Foundation in his honor.

As he prepares to mark 70 years as a priest, the Sun asked Msgr. McCloskey to look back on his seven decades of service and offer his reflections and remembrances.

Growing up in Syracuse, Msgr. McCloskey’s home parish, the Cathedral of the Immaculate Conception, was just steps from his family’s home on South State Street.

“When I was maybe 7 or 8, I wanted to be pope,” he said with a laugh, “but then I lowered my expectations.”

“I thought about it [a call to the priesthood], I’m sure, through school, but I didn’t really make a firm commitment within myself until the end of my junior year in high school,” he continued. “Very influential in that was Msgr. Martin J. Watley.”

A priest at the Cathedral, Msgr. Watley was an excellent preacher, Msgr. McCloskey recalled, and he was good to the McCloskey family.

“He helped in many ways, but most of all he was my spiritual director,” Msgr. McCloskey said. “He didn’t tell me I should go in the seminary, but the conclusion to all his premises was, ‘You’re a dummy if you don’t. God is calling you, you’ve got all the signs.’”

After graduating from Cathedral Academy in 1939, Msgr. McCloskey studied for two years at Niagara University. “The priests there had a lot of good advice for me because I was very arrogant,” he chuckled. “They convinced me that there were one or two things that I didn’t know.”

He went on to priestly studies at St. Bernard’s Seminary in Rochester and at Theological College in Washington, DC.

Among the highlights of his seminary formation Msgr. McCloskey recalled “the liturgies, because first of all, where do you hear 200-plus men’s voices out there singing their hearts out to praise God?”

Two Sulpician priests at Theological College, both rectors, also influenced him: Fathers Anthony Vieban and Lloyd McDonald. Msgr. McCloskey recalled Father McDonald as knowledgeable, kind, firm but not severe, and very wise. Called into the priest’s office one day, Msgr. McCloskey was offered some advice: “‘If you do something wrong, do not make a tragedy of it.’ Little remarks like that have this lifelong effect on you,” he remembered.

Msgr. McCloskey was ordained a priest of the diocese on May 30, 1946. He spent nearly five decades serving in parishes, as parochial vicar of Our Lady of Pompei, St. Peter, St. Daniel, and St. Therese, all in Syracuse; and as pastor of Christ the King in Liverpool, Holy Family in Syracuse, and St. Brigid/St. Joseph in Syracuse. (Msgr. McCloskey also served the diocese as CCD director, promoter of justice, consultor, and as a member of the CCD, evaluation, and Catholic education task force committees. He was also moderator of the Circle International Federation of Catholic Alumnae and spiritual director for the Legion of Mary.)

The best part of being a parish priest? “The word that comes to my lips right away is the people, and being welcomed into their lives in such a trusting way,” Msgr. McCloskey said.

He didn’t have a favorite parish in his ministry, because “each one had its appeal,” though he noted Christ the King “had maybe the most exciting scenario for me: I’m the first pastor at the end of the [Second Vatican] Council, implementing it all.” He gathered the parish together and they pitched in, Msgr. McCloskey recalled, and the parish was one of the first to have a parish council.

The decision to retire was extremely difficult, Msgr. McCloskey said, and he chose Immaculate Conception because he wanted to continue helping. He’ll mark 21 years at the parish in July, his longest tenure at any parish.

“I know I have the trust of the people, which I appreciate very deeply, and I try to respond,” he said.

When he first arrived at the parish, he made a point of doing two things: visiting the school and greeting parishioners after Mass. “It was a practice that grew and now everybody does it, thanks be to God,” he said. “I think there is a great spirit in the parish…. They’re really good people in the way they’ve accepted me.”

These days, a typical day for Msgr. McCloskey includes celebrating the 9 a.m. Mass, tending the candles in the church, and prayer, he said. He provides “counseling of one kind or another at least three or four times a month,” and he also tries “to encourage groups in the parish just by showing up” and saying a little something, he said. He also visits the parish school when he can.

Immaculate Conception Pastor Father Tom Ryan said Msgr. McCloskey is “certainly instrumental to the spiritual life of the parish. He’s a deeply spiritual man, a sought-out confessor…. He has a great relationship with young kids, especially at our school.”

“In many ways he’s the face of IC to so many, many people,” Father Ryan continued. “He’s seen many people go through the doors here and had a great effect on the lives of many people, and continues to.”

Asked what has kept him going for 95 years, Msgr. McCloskey recalled the words of Father John Wilson Lynch in a lecture given while he was at St. Bernard’s: “He said, ‘If I have any advice after 11 years of ordination, it would be this: Never let go of the supernatural motive.’”

“You do this because I believe it’s the will of God for me and that’s what is uppermost in my mind,” Msgr. McCloskey said. “I made an announcement in the bulletin and I said that I’m happy where I am and I’m going to spend the rest of my years cramming for the final exam before a fair and merciful judge…. I said, the reason I’ve lived this long, I think is because of my many faults and failings down through the years and right up to the present. I’m still working off this debt of community service hours that God has assigned me. When I complete that, he can let me in.”

To a young person discerning a call to religious life, Msgr. McCloskey says, “Pray that God will guide you to keep your priorities in order — only then will you realize peace. God first, then neighbors, then yourself. Peace is the calmness that comes from order and things are in order when your priorities are in order. Your own life will be peaceful. That doesn’t exclude trials and depression and all the rest, but if you have that supernatural motive that Father Lynch was talking about — I’m doing this to please God, the will of God is my top priority, my will is second to His — so if I see it as the will of God, there it is.”