New team approach a bold move for vocations in the diocese 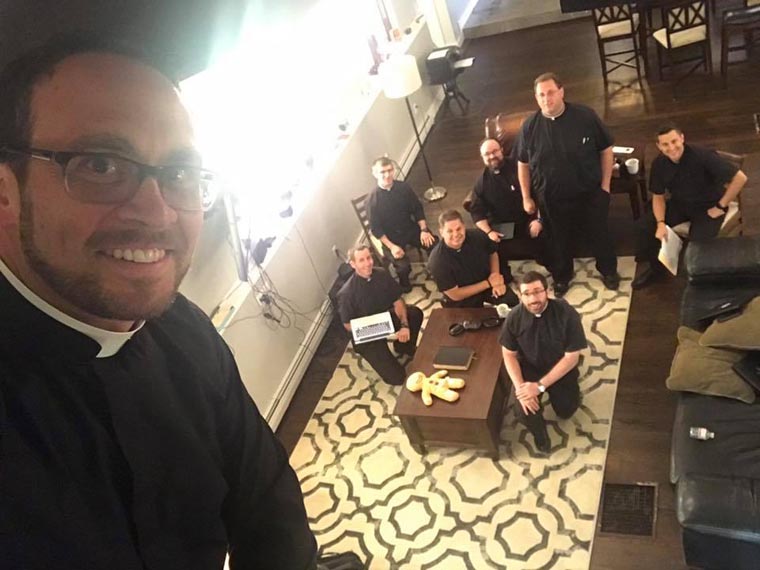 Something is stirring in the Diocese of Syracuse. With the shortage of priests, we all have had to face new realities. We know that things cannot continue as they have in the past. Some can see this reality as cause for fear or trepidation, but others can see this as a graced opportunity for the Holy Spirit to inspire in new and unexpected ways. This exciting movement has most recently taken root in the area of Vocations Promotion.

Father Joe O’Connor, Vocation Promoter for the Diocese of Syracuse, was recently named pastor of St. Elizabeth Ann Seton Parish in Baldwinsville. He will carry out his role as pastor while maintaining his role as Vocation Promoter. Father John Manno, newly appointed Director of Seminarians, is managing that role while also serving as pastor of Holy Family Church in Syracuse.

Bishop Cunningham, taking these various roles and responsibilities into consideration, called together a Vocation Promotion Team to assist the Vocations Office. Instead of shrinking diocesan vocation efforts, the diocese has taken a bold step to strengthen vocation promotion by forming a tactical team of priests to carry out this most important work.

When the bishop first met with this new team of priests in June, he assigned them specific areas of coverage for promotion efforts:

• Father Chris Ballard, pastor of Our Lady of Hope Parish in Syracuse, will oversee the renewal of the vocations website as well as strengthening our social media outreach;

•I, in addition to my service as administrator of St. Mary’s Church in Hamilton and St. Joan of Arc Mission in Morrisville, will continue my efforts with Fisherman’s Club, a discernment group for college-aged men, and will also oversee promotion efforts at Notre Dame Jr./Sr. High School in Utica.

The bishop’s hope is that each priest will make himself available to any young man or woman discerning a vocation in these regions.

At the first Vocation Promotion Team meeting in August, it was proposed that this newly named team take on the task of producing a diocesan strategic plan for vocation promotion. The result is a three-year action plan for fostering a more zealous culture of vocations in the Diocese of Syracuse. The team, after prayer and reflection, composed the following mission statement: “God created you to live in a relationship of love with Him. He invites you to respond to His love in a particular way of life — your vocation. Our mission is to help you discover, embrace, and live out God’s call.”

In conjunction with this mission statement, the team also composed the following vision statement: “Foster opportunities for encounter with Jesus Christ, so that young people can freely respond to His invitation to follow Him as a priest or consecrated religious.”

The team has developed a timeline of events to more effectively reach potential discerners. For high school students, the Promotion Team will host Project Andrew dinners four times a year, one in each region of the diocese. For young adult men, the Fisherman’s Club will continue its efforts by hosting meetings at Le Moyne College in Syracuse, and will soon expand its presence into each region. Father Mike Galuppi, pastor of Our Lady of Good Counsel and St. Ambrose Parishes in Endicott, has already begun such an effort in Binghamton.

The team will be coordinating the Called By Name initiative whereby pastors, the weekend of priestly ordinations, will ask their parishes to identify potential candidates for priesthood and religious life. These names will be submitted to the Vocations Office and these young people will then be invited to the Annual Vocations Picnic.

The Vocations Picnic will also be upgraded to a Day of Recollection in the hopes that students will have more time to pray and reflect on their personal vocation with their peers.

The team will also focus on inviting young adult men to an annual New York State Discernment Retreat that will take place the first week of January at Christ the King Retreat House in Syracuse. Vocation Directors and discerners from all over the state will now participate in this special event every year in Syracuse.

The members of the Promotion Team will also lead regional workshops for Catholic school teachers, directors of Faith Formation, and youth ministers.

The Promotion Team believes that all of the initiatives that comprise their strategic plan will come to nothing if they are not supported by sincere prayer. Therefore, the team will be meeting privately throughout the year to offer prayer and supplication for an increase of vocations to the priesthood and religious life in the Diocese of Syracuse. Please join the team in your personal prayer for this most worthy cause, as the future of our diocese depends on its success. Mary Immaculate, pray for us!

For more information on this effort, please contact Father Joe O’Connor at joconnor@syrdio.org.