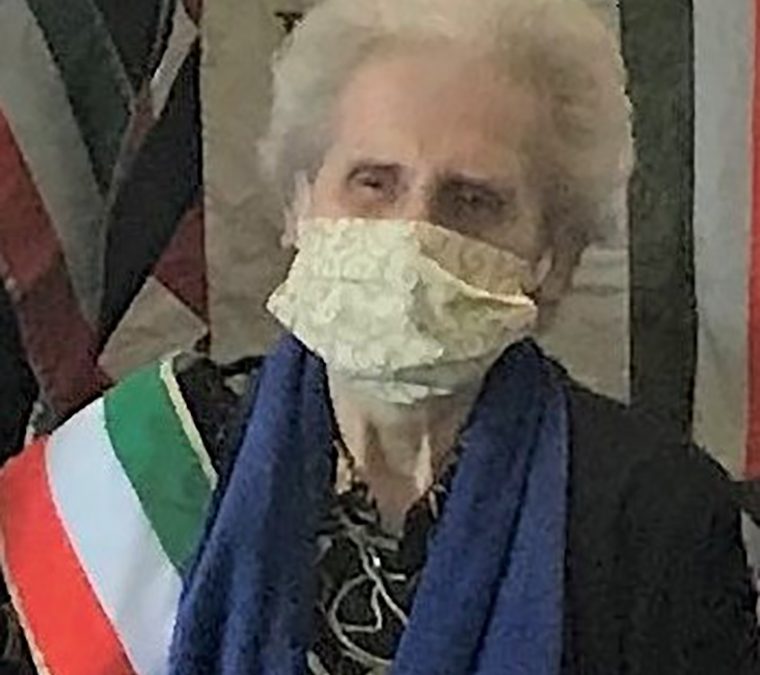 Delores Fitzgerald of Oswego was presented the 2020 National Ladies Ancient Order of Hibernians “St. Brigid of Ireland Humanitarian Award” Oct. 17 at a tea at the Hibernian Hall in Oswego.

This is the highest award that can be given to any LAOH member. It is bestowed biennially at the National Convention which was to be in Florida this year but was held virtually. To honor Delores, the State President, MaryBeth Durkee, and the National President, Karen Keane, decided to make the trip to Oswego to present the award to Delores personally.

In 2019 Delores was nominated by the President of her Division for the New York State Mother Teresa Award and won. A beautiful rosary and certificate were presented at the State Convention in Albany. The nomination letter was then entered into the national award competition and the winner was decided by a vote of all the state presidents. For the first time there was a tie so it was decided to honor both Delores and Cecilia Leonard of Albany with the prestigious award.

Delores has been a member of LAOH Oswego Division 3 in good standing for over 50 years. She and her husband, Don Fitzgerald, who belonged to the Oswego AOH, have been very active members not only at Hibernian events but also at numerous church festivals, fish dinners, soup kitchens, and community events throughout Oswego. Don has passed but Delores continues with their works of charity.

To win either of these awards, a member must be a Catholic woman who is active in her faith and a LAOH member in good standing who exemplifies the Hibernian motto of Friendship, Unity, and Christian Charity.

Delores is a devout Catholic who attends daily Mass in Oswego. She is always the first to volunteer to help no matter how challenging the task and she has spent her life in service to both her church and her community. Anyone who knows Delores would agree that she is more than deserving of these awards.

Still, Delores remains a truly humble  woman who is more comfortable in her apron serving in the kitchen than on stage. She will be quick to tell you that she does not do her good deeds to be praised but rather in praise of and love for her God. Upon accepting the beautifully engraved Waterford Crystal bowl made in Ireland presented with the printed decree, she simply said, “I’m really overwhelmed and all I can say is thank you all so much!”

Jeanne Smith is President of LAOH Division 3 in Oswego.