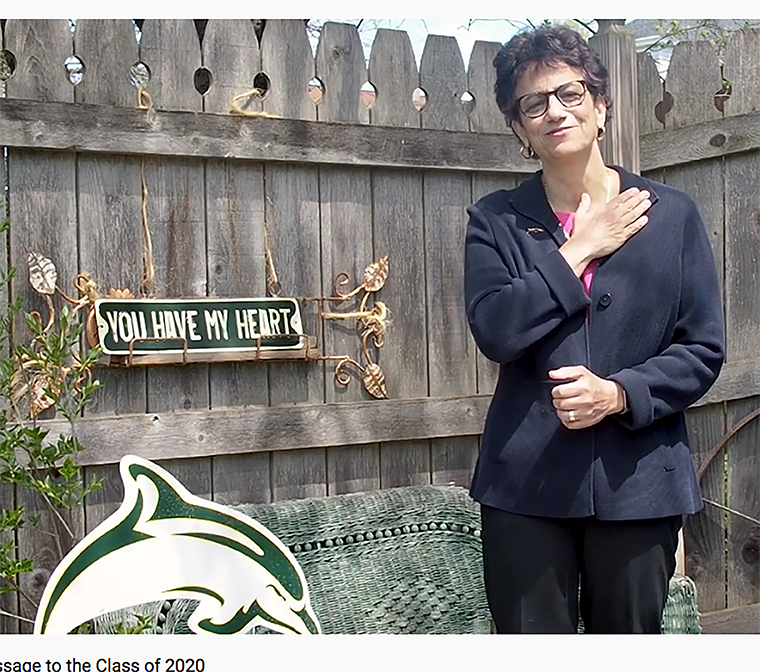 Le Moyne College President Linda LeMura last week sent a video to the Class of 2020. In it, she acknowledged students’ disappointment at losing part of their final semester, but praised them for their community spirit. “As Phins, we’re always together,” she said as she tapped her heart. (Image via screenshot) 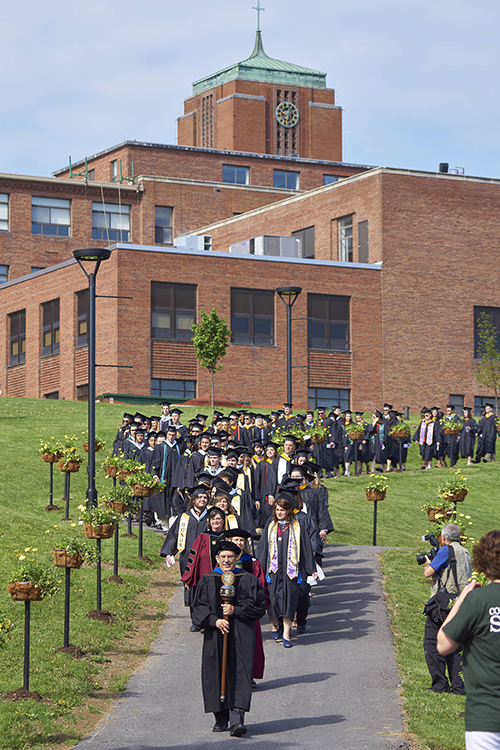 Le Moyne College faculty members process behind the Class of 2015 toward the commencement site. (Archive photo by Chuck Wainwright and David Garrett for the Sun and Le Moyne College)

The Le Moyne College Class of 2020 was supposed to celebrate 100 Nights, the traditional dance counting down the days to graduation, on February 7. A snowstorm dropped about 9 inches in the Syracuse area that day, though, and the event was rescheduled for this week. Thanks to the coronavirus pandemic, Le Moyne seniors never attended their 100 Nights party.

“It stinks a little bit,” said Michael Songer, a Le Moyne senior who lives in Liverpool. “I was looking forward to going to it with the people I’ve gone to school with. It’s sad to miss out on that part.”

Le Moyne students have not been on campus since they left March 6 for spring break. By March 17, after Bishop Douglas J. Lucia suspended public Masses in the Syracuse Diocese and the state closed schools, the college announced that it was moving instruction online for the spring semester. A week later, Le Moyne officials announced the college was postponing commencement, scheduled for May 15 and 17.

With campus closed, Songer and his classmates missed many rituals of their final semester together. No Dolphy Day to welcome spring. No Senior Week picnics or parties. No senior retreat or baccalaureate Mass. No lining up together, awaiting the brass and percussion of Aaron Copland’s “Fanfare for the Common Man” to start commencement.

“There’s no way to make it normal, but Le Moyne is trying their best to keep us involved,” said Songer, a member of Epiphany Parish in Liverpool. “The biggest loss is not having people around in the downtime. Living on campus, I would be able to walk down the hall or sit with someone in the cafeteria. You really have to make those connections.”

Le Moyne President Linda LeMura, who has recorded several video messages this spring for students, feels their pain. The pandemic and the restrictions it spurred are “an affront to our community,” she said. “Being unable to celebrate this class in the Le Moyne fashion with all our rituals has been a source of immense grief.” 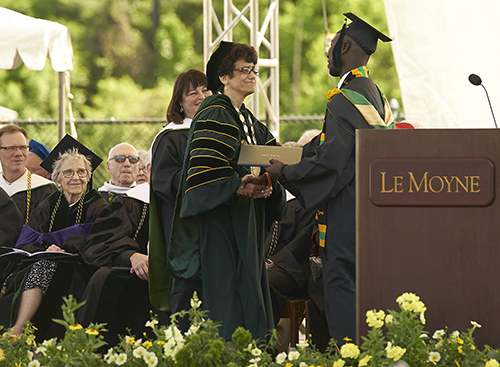 Le Moyne College President Linda LeMura congratulates a graduate during the school’s 2015 commencement, her first as president of the college. (Archive photo by Chuck Wainwright and David Garrett for the Sun and Le Moyne College)

She’s trying to make things right in other ways, too. Le Moyne is offering members of the Class of 2020 a 40 percent tuition discount for one year in select master’s degree programs. The program, Reaching New Heights, will also allow senior student-athletes to complete their NCAA eligibility while starting a graduate degree.

As at many colleges, Le Moyne students received account credits representing a prorated reduction on room and board from the date they stopped living on campus. Through The Jesuit Fund, the college has sent students money for computers, Wi-Fi, food, or lodging. “We’ve received hundreds of applications,” LeMura said. “Some of our students are economically challenged, but you don’t notice all the differences when you’re living in a dorm.”

The college lost about $5 million — about 6 percent of its annual income — through refunds for room and board and fees, LeMura said. That loss will be repaid out of the college’s reserve fund, she said.

Officials are bracing for another multimillion dollar loss if new students defer admission and returning students do not come back. The college moved the acceptance deadline to June 1.

Le Moyne’s endowment had reached $215 million this year. It dropped to $160 million when the stock market dropped in March, but has recovered some since then, LeMura said. The 4.5 percent annual withdrawal, about $3 million, won’t cover the losses related to the pandemic, she said.

But the college’s endowment “provides a cushion,” LeMura said. The college has had no staff or faculty layoffs, although furloughs are possible if fall enrollment numbers decline significantly, she said.

The pandemic and its disruptions come as the college nears the end of a $100 million campaign. “This is a setback, but we’re going to prosper,” LeMura said. “Le Moyne Dolphins don’t quit. There’s a grittiness and a resilience to the community that can’t be modeled.”

LeMura is also optimistic campus can reopen in the fall, providing COVID cases decline and county and Centers for Disease Control and Prevention guidelines allow. Summer courses will be online, and Le Moyne has canceled or postponed all on-campus events through July 31.

Fall plans include regular testing and tracing on campus, creating quarantine rooms, and increasing sanitizing. The college plans to offer online options for students with preexisting conditions, and faculty who are vulnerable to the virus will be able to teach online.

“It’s not going to be a perfect situation,” LeMura conceded. “Colleges and universities go out of their way to increase density. Now we have to go the other way.”

To reduce classroom density, half a course’s students may attend in person, while the other half views the class online, she said. The groups could then switch, so everyone gets in-person teaching.

The college will try to spread students out in the dorms, although there is not enough space for all to have their own rooms. “It’s going to be hard on everyone,” she said. “It’s also a test for this generation. It’s a lesson in caring for others and living in community during a pandemic.” 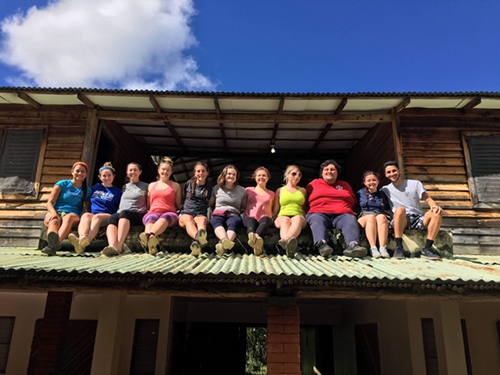 Michael Songer, third from right, sits with Le Moyne College students during a January service immersion trip to Dominican Republic. The students are on the roof of an eco-lodge at a coffee plantation, where they learned about coffee production and farm worker rights. (Photo courtesy Michael Songer)

Songer will miss “a lot of the little things” from his Le Moyne experience. That includes “special moments with friends, a really fun moment with students in Dominican Republic hula hooping, the first time I won trivia night with friends in the Pub.”

He is graduating with a history major and minors in education, faith and social justice, and religion. He was a resident adviser and a member of the student programming board and numerous other campus groups.

In 2018, he went with a group of Le Moyne students to Jamaica, where they visited schools, a home for children with disabilities, a home for the elderly, and built a house. In January, he was among 10 students on an immersion trip to Santiago, Dominican Republic.

Although he’s disappointed at missing this weekend’s festivities, Songer is looking ahead. He’s heading to Philadelphia, where he’ll serve in the Jesuit Volunteer Corps at Cristo Rey High School. His departure is set for the first week of August.

Songer is eager to celebrate graduation. “I feel like it’s going to be like after a show ends: lots of nostalgia and everyone’s hugging,” he said. “I don’t know how formal it will be or what it will look like with social distancing, but I’m excited to see everyone again.

Songer, who’s considering a career in youth ministry, got through this unusual semester by focusing on the Jesuits’ call to “find God in all things.”

LeMura agrees. “Jesuit education is 500 years old and has endured plagues and wars and depressions,” she said. “We’ll endure this pandemic.”