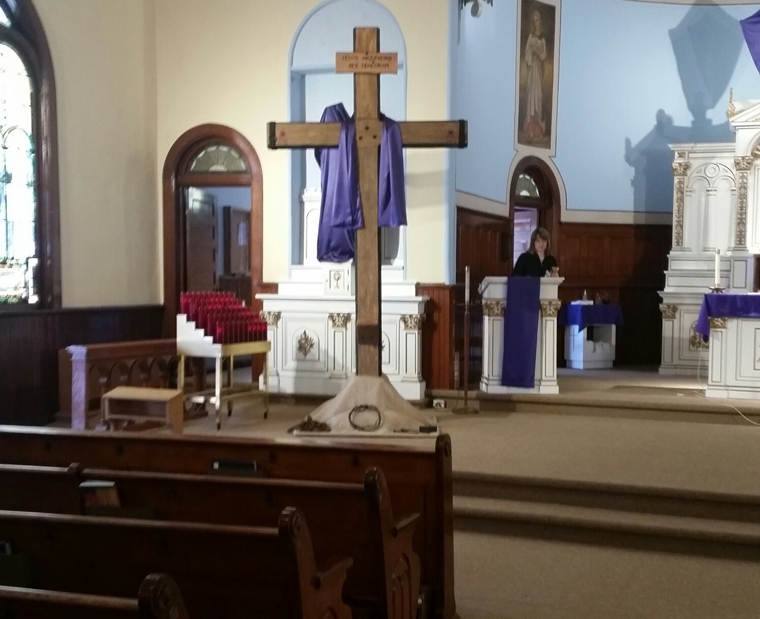 CHADWICKS — Ron Baker has always enjoyed helping out at his local parish, St. Patrick’s-St. Anthony’s Church. Baker, a carpenter, has been a parishioner for the past 40 years, and, along with members of his family, has been a familiar sight at the church, performing a number of services including repainting and refurbishing the Stations of the Cross. Baker has also been called upon throughout the years to use his talents to create impressive altar or church decorations for the various seasons. As Easter approached, no one in the parish was surprised to hear Baker was working on a display for the altar. What did surprise everyone was the impressive size of the display and the workmanship and the detail that went into the large cross and tomb.

Baker, assisted by his daughter, who conducted the research for the display, and his grandson and granddaughter, who helped with the construction, crafted an impressive representation of Jesus’ tomb and cross out of 25 lbs. of Styrofoam. “I wanted it to look as life-like as possible,” explained Baker. It took Baker almost five weeks to complete the display, which was housed during that time in his basement. When completed, the cross was approximately 12 feet tall and the tomb-like structure could fit a person inside the opening. “Even I was surprised how well it came out,” laughed Baker.

Throughout the Easter season, the cross and the tomb remained on the altar as a reminder of the sacrifice Jesus made for humanity. Baker hopes next year to add robotics to the display that would allow the front piece of the tomb to move, replicating the rolling away of the stone when Jesus rose from the dead.