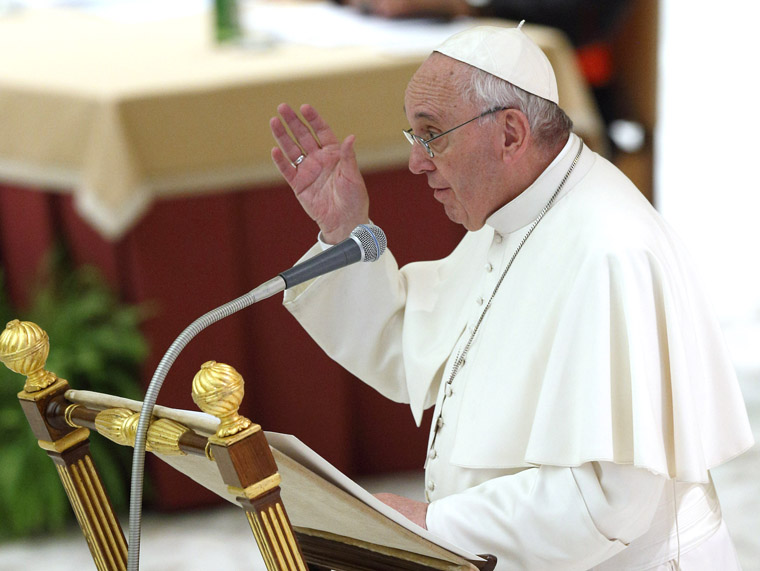 VATICAN CITY (CNS) — Marking the 50th anniversary of the Synod of Bishops, Pope Francis outlined his vision for a church that is “synodal” at every level, with everyone listening to one another, learning from one another and taking responsibility for proclaiming the Gospel.

“The journey of synodality is the journey that God wants from his church in the third millennium,” the pope said Oct. 17. “A synodal church is a listening church, aware that listening is more than hearing. It is a reciprocal listening in which each one has something to learn.”Pope Francis, members of the Synod of Bishops on the family, theologians and other guests dedicated a morning to marking the anniversary of Blessed Paul VI’s institution in 1965 of the synod as a forum for sharing the faith and concerns of the world’s Catholics, reflecting together and offering counsel to the pope.

Referring to the Greek roots of the word “synod,” Pope Francis said, “walking together — laity, pastors, the bishop of Rome — is an easy concept to express in words, but is not so easy to put into practice.”

In fact, before Pope Francis spoke, five cardinals, an archbishop and the patriarch of the Chaldean Catholic Church spoke about the blessings and challenges of the synod process over the past 50 years. They agreed that while the synod’s methodology has improved over the past five decades, there still is work to do.

“We must continue on this path,” Pope Francis told them. “The world in which we live and which we are called to love and serve, even with its contradictions, requires from the church the strengthening of synergies in all areas of its mission.”

Using the synod on the family as an example, the pope said it would have been impossible for the 270 bishops and priests who are voting members of the assembly to speak to real needs and concerns without listening to and trying to learn from Catholic families.

“It was that conviction that led me when I asked that the people of God be consulted” before the synod, the pope said. “How would it have been possible to speak of the family without calling upon families, listening to their joys and their hopes, their pains and their suffering?”

The need for everyone in the church — from the pope on down — to listen and to learn from others is based on the conviction, clearly explained by the Second Vatican Council, that through baptism and confirmation all members of the church have been anointed by the Holy Spirit and that the entire Christian community is infallible when its members discern together and speak with one voice on matters of faith and morals, Pope Francis said.

“The ‘sensus fidei’ (sense of faith) makes it impossible to rigidly separate the ‘ecclesia docens’ (teaching church) and the ‘ecclesia discens’ (learning church) because even the flock has a ‘nose’ for discerning the new paths that the Lord is opening up to the church,” the pope said.

But ensuring the synodality of the whole church will be impossible, he said, if people misunderstand the church’s hierarchy and see it as a structure in which some people are placed above others.

The church’s structure, the pope said, “is like an upside down pyramid” with the top on the bottom, which is why the ordained are called “ministers” — they serve the others.

In a diocese, he said, the bishop is the “vicar of that Jesus who, at the Last Supper, knelt to wash the feet of the apostles,” and the pope is called to truly be “the servant of the servants of God.”

“We must never forget: for the disciples of Jesus — yesterday, today and forever — the only authority is the authority of service; the only power is the power of the cross,” he said.

The world needs the Catholic Church to witness to that Christian vision of community, participation, solidarity and joint responsibility, he said. In too many countries power is in the hands of just a few people, the dignity of many is denied and authority is abused.

Pope Francis told the gathering that “the pope does not stand alone above the church,” but he is “within it as a baptized person among the baptized and in the episcopal collage as a bishop among bishops, called at the same time — as the successor of the Apostle Peter — to guide the church of Rome, which presides in love over all the churches.”

A synodal spirit must be at work in dioceses as well as in the universal church, Pope Francis said. Priests’ councils, pastoral councils and other consultative bodies in a diocese must “remain connected to the base,” to the grassroots, if they are to help a bishop respond to the real needs and concerns of the Catholic people.

Looking specifically at the Synod of Bishops, the pope said the process for each synod must begin with listening to the faithful. The second stage is to have the pastors listen to each other. The role of bishops at a synod is to “act as authentic custodians, interpreters and witnesses of the faith of the whole church, attentively distinguishing it from the often changing fluxes of public opinion.”

The third stage of a synod is to listen to the pope, the bishop of Rome, called to make pronouncements “not based on his personal convictions, but as the supreme witness of the faith of the entire church,” he said.

The fact that the synod is not a decision-making body and acts only “with and under” the pope, he said, “is not a limitation on its freedom, but a guarantee of unity.”