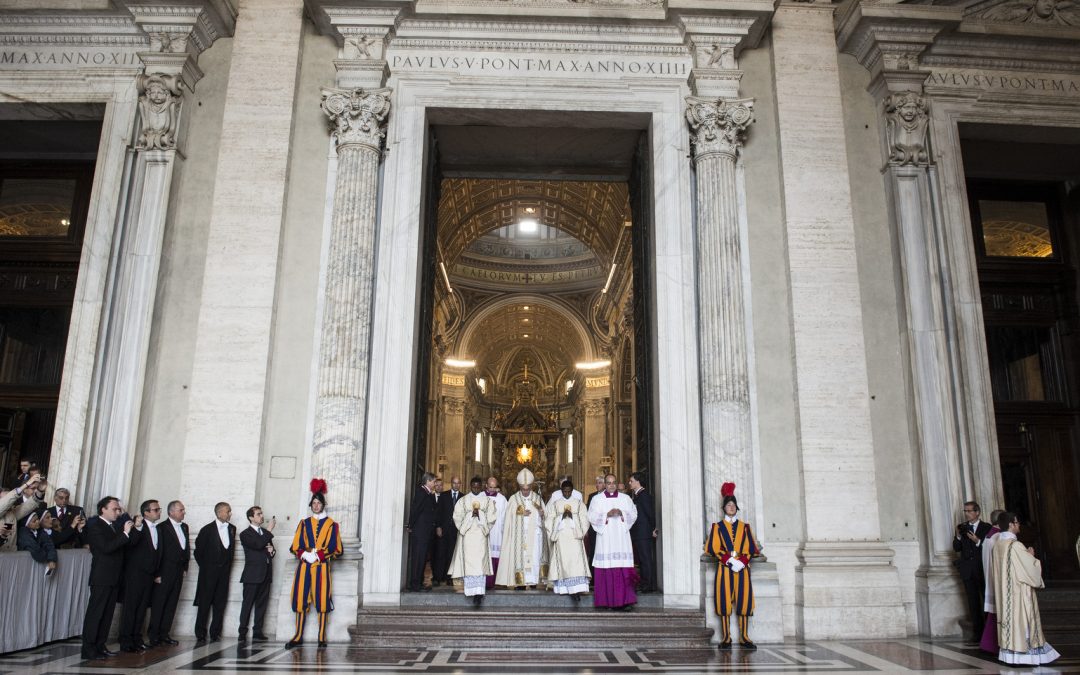 “If God limited himself to only justice, he would cease to be God, and would instead be like human beings who ask merely that the law be respected,” the pope wrote in “Misericordiae Vultus,” (“The Face of Mercy”), which is the “bull of indiction” calling a Holy Year to begin Dec. 8.

Standing in front of the Holy Door of St. Peter’s Basilica April 11, Pope Francis handed copies of the document to the archpriests of the major basilicas of Rome and to Vatican officials representing Catholics around the world.

Portions of the 9,300-word proclamation were read aloud before Pope Francis and his aides processed into St. Peter’s Basilica to celebrate the first vespers of Divine Mercy Sunday.

In his homily at vespers, the pope said he proclaimed the Year of Mercy because “it is the favorable time to heal wounds, a time not to be weary of meeting all those who are waiting to see and touch with their hands the signs of the closeness of God, a time to offer everyone the way of forgiveness and reconciliation.”

The boundless nature of God’s mercy — his willingness always to forgive anything — has been a constant subject of Pope Francis’ preaching and is explained in detail in the document, which outlines some of the specific projects the pope has in mind for the year.

The Old Testament stories of how God repeatedly offered mercy to his unfaithful people and the New Testament stories of Jesus’ compassion, healing and mercy demonstrate, the pope said, that “the mercy of God is not an abstract idea, but a concrete reality through which he reveals his love,” just like mothers and fathers love their children.

“How much I desire that the year to come will be steeped in mercy, so that we can go out to every man and woman, bringing the goodness and tenderness of God,” he wrote. “May the balm of mercy reach everyone, both believers and those far away, as a sign that the kingdom of God is already present in our midst.”

Nothing in the church’s preaching or witness, he said, can be lacking in mercy.

Pope Francis asked that all dioceses around the world designate a “Door of Mercy” at their cathedral or another special church or shrine, and that every diocese implement the “24 Hours for the Lord” initiative on the Friday and Saturday before the fourth week of Lent. In Rome the last two years, the pope has opened the celebration with a penance service in St. Peter’s Basilica and churches around the city were open for the next 24 hours for confessions and eucharistic adoration.

The pope said he will designate and send out “Missionaries of Mercy” to preach about mercy; they will be given special authority, he said, “to pardon even those sins reserved to the Holy See.” Under church law, those sins involve a man who directly participated in an abortion and later wants to enter the priesthood, priests who have broken the seal of confession, priests who have offered sacramental absolution to their own sexual partners, desecrating the Eucharist, and making an attempt on the life of the pope. Usually, the Apostolic Penitentiary, a Vatican court, handles those cases.

And he urged all Catholics to spend more time practicing what traditionally have been called the corporal and spiritual works of mercy. The corporal works are feeding the hungry, sheltering the homeless, clothing the naked, visiting the sick, visiting the imprisoned, giving drink to the thirsty and burying the dead. The spiritual works are converting sinners, instructing the ignorant, advising the doubtful, comforting the sorrowful, bearing wrongs patiently, forgiving injuries and praying for the living and dead.

The date the pope chose to open the year — Dec. 8 — is the feast of the Immaculate Conception and the 50th anniversary of the closing of the Second Vatican Council. Both dates, he wrote, are related to the Year of Mercy.

Mercy, he said, is “the bridge that connects God and man, opening our hearts to a hope of being loved forever despite our sins.” That bridge was made concrete when God chose Mary to be the mother of his son.

The Year of Mercy, Pope Francis wrote, is also a way to keep the Second Vatican Council alive. “The walls which too long had made the church a kind of fortress were torn down and the time had come to proclaim the Gospel in a new way,” he said. The council recognized “a responsibility to be a living sign of the Father’s love in the world.”

The life and action of the church, he said, “is authentic and credible only when she becomes a convincing herald of mercy,” a mercy that “knows no bounds and extends to everyone without exception.”

While some people try to argue that mercy, even God’s mercy, is limited by the demands of justice, Pope Francis said mercy and justice are “two dimensions of a single reality that unfolds progressively until it culminates in the fullness of love.”

Preaching mercy, he said, is not the same as ignoring sin or withholding correction. Instead, mercy invites repentance and conversion and ensures the sinner that once God forgives a sin, he forgets it.

The pope addressed direct appeals in the document to members of the mafia and other criminal organizations as well as to officials and others involved in corruption. “For their own good, I beg them to change their lives,” he wrote. “I ask them this in the name of the Son of God who, though rejecting sin, never rejected the sinner.”

“Violence inflicted for the sake of amassing riches soaked in blood makes one neither powerful nor immortal,” he continued. “Everyone, sooner or later, will be subject to God’s judgment, from which no one can escape.”

At the same time, Pope Francis wrote, many of those who insist first on God’s justice are like the Pharisees who thought they could save themselves by following the letter of the law, but ended up simply placing “burdens on the shoulders of others and undermined the Father’s mercy.”

“God’s justice is his mercy,” the pope said. “Mercy is not opposed to justice, but rather expresses God’s way of reaching out to the sinner, offering him a new chance to look at himself, convert and believe.”

Recognizing that they have been treated with mercy by God, he said, Christians are obliged to treat others with mercy. In fact, the Gospel says that Christians will be judged by the mercy they show others.

“At times how hard it seems to forgive,” he said. “And yet pardon is the instrument placed into our fragile hands to attain serenity of heart. To let go of anger, wrath, violence and revenge are necessary conditions to living joyfully.”

Pope Francis also noted that God’s mercy is an important theme in Judaism and Islam, and he urged efforts during the Year of Mercy to increase interreligious dialogue and mutual understanding with followers of both faiths.