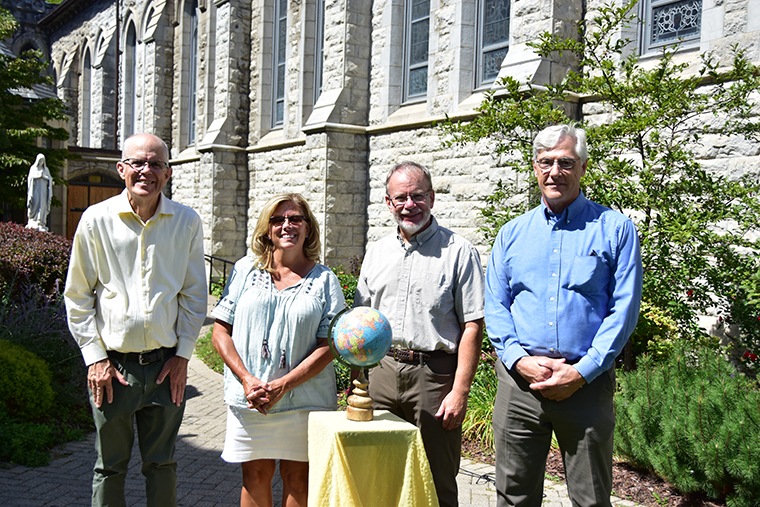 Psalm 19:2 tells us, “The heavens declare the glory of God; the firmament proclaims the works of his hands.” Members of the Care for our Common Home Task Force remind us that as creation proclaims glory, it also warns us. The Season of Creation is a time, then, for all to listen to the voice of creation, as Moses did on Mount Horeb where he encountered the Burning Bush, the symbol for the 2022 observance of the season.

In Syracuse, a group of listeners gathered to note the start of the Season of Creation. It is an annual Christian international celebration, one supported by the Catholic Church and, specifically in the Diocese of Syracuse, by the Care for our Common Home Task Force. A group of task force members led a prayer service Sept. 1 in the Cathedral of the Immaculate Conception courtyard, ushering in the season that concludes on Oct. 4, the Feast of St Francis of Assisi.

“It’s something held worldwide,” according to Theresa May, the associate director of the Office of Child and Family Catechesis. “Everyone for a month will be praying for and building awareness about our care for all of creation.”

May also pointed out that children are learning the urgent message of caring for creation in school and bringing it home to their families. May added that “people today are having to flee from their homes because of wildfires, because of drought. That will affect all of us, not just in the countries where it’s happening. We have to make a difference now,” she said, “we have to build that awareness.”

Team member David Babcock added that the initiative started within the Eastern Orthodox tradition in the 1990s and has grown since. The evidence of the need is all around us and the season is about recognizing it. “The biggest thing we can do right now is talk about it,” according to Babcock, “not in a way that is controversial or divisive but in a loving way.” He agreed that there is urgency. “God’s giving us messages here, and we need to act.”

To learn more about the Task Force, visit https://syracusediocese.org/being-catholic/pope-francis/laudato-si/.