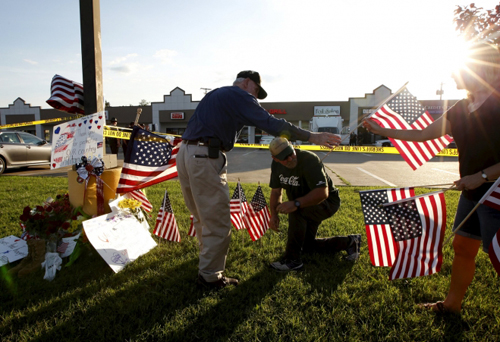 CHATTANOOGA, Tenn. (CNS) — An outpouring of sympathy and prayer washed over Tennessee for the victims of the July 16 shootings that left four Marines and the shooter dead.
Three others were injured, and one of them, a sailor, died early July 18.

Bishop Richard F. Stika of Knoxville, whose diocese includes Chattanooga, encouraged all Catholics and people of faith to participate in a community prayer service at the Basilica of Sts. Peter and Paul in Chattanooga held the afternoon of the shootings at a military recruiting center and a Navy-Marine training center a few miles away.

Muhammad Youssef Abdulazeez, 24, of Hixson, Tennessee, was identified by law enforcement authorities as the gunman. AP reported he was shot to death by police.

Father David Carter, pastor of the basilica, led the prayer service for all the victims of the incident, including the shooter. Three days later Bishop Stika celebrated a Mass at the basilica for all who lost their lives.

The beautiful day of July 16 was “interrupted by evil,” he said in his July 19 homily. Like the Dec. 7, 1941, attack on Pearl Harbor, the 9/11 terrorist attacks, the mass shootings in Connecticut, Texas and Colorado, and violent conflict in Syria, Iraq and elsewhere, “there are so many beautiful days God has given to us — and yet they are interrupted by evil,” Bishop Stika said.

“Evil was made manifest in an individual who interrupted the lives of a community, the lives of five people and their family, their loved ones” and their military family, he continued. “We live in a world of great confusion … and yet this world is not different than the world of the past. All you have to do is read a history book and see from time to time evil creeps in,” he said.

“The challenge for all of us is how do we respond to that evil? We can’t control the actions of other people for the most part,” he continued. “We can only control our response. … That’s what Jesus means by turning the other cheek. (It) doesn’t mean we have to weave and dodge but maybe our response should be measured. … We have no control over that young man who belonged to another faith but what he did not represent that faith.”

“Our response should be forgiveness,” as Jesus teaches, Bishop Stika said.

In a statement issued the day of the shootings, the bishop said “our community is deeply saddened by the tragic loss” of the servicemen “in this senseless act of violence.”

“I have two brothers who served in the U.S. Marine Corps and I recognize and appreciate the selfless service all members of the military give to protect us,” he added. “We ask for your prayers for the souls of those who lost their lives, the recovery of those wounded in these shootings, and for all of their families.”

Father Carter said about 50 people attended the July 16 prayer service. He said they were seeking solace and guidance in dealing with the situation.

It was a sobering, somber experience, he said, that changed into one of hope “as we invited God to help us make sense of this situation.”

“We’re all shocked by the shooting. We didn’t expect it to happen in Chattanooga, this close to home. I have parishioners who went to high school with the young man identified as the assailant,” Father Carter told The East Tennessee Catholic, newspaper of the Knoxville Diocese.

“We’re saddened that our city had to experience such violence, but we have a way of uniquely responding to this situation,” he said. “We’re responding with hope and the belief that we play a part in making the world a better place. There’s far more good we can do to overcome the senseless acts of violence. We’re called to be light in the darkness.”

“Once again senseless violence has felled five members of the Sea Services who were giving of themselves for the nation they loved,” said Archbishop Timothy P. Broglio of the U.S. Archdiocese for the military services.

In a statement issued July 19 on behalf of the archdiocese, he expressed “heartfelt sympathy to the families who lost loved ones and the Marine Corps and the Navy. It grieves all people of goodwill to see those who faithfully serve others mercilessly slain in what should have been safe places.”

“I pray for the repose of their souls, the consolation of their loved ones, and a renewal of a spirit of dialogue in the hope that it leads to lasting peace,” Archbishop Broglio said.

In a statement, Bassam Issa, president of the Islamic Society of Greater Chattanooga, said that in his community, “our hearts are with the families of the brave Marines who died today and with the police officer and two bystanders who were shot and injured in this cowardly act.

“We condemn this act in the strongest possible terms as one of cowardice and hate. At the Islamic Society of Greater Chattanooga, we don’t see our community center as a ‘Muslim’ community;we are Chattanoogans first, and we see ourselves as part of the larger community of Tennesseans grieving today’s act.”

He said it is “vital, crucial, and essential that all Muslims in the Greater Chattanooga Community attend this event to express our con-solidarity, unity, empathy, and compassion. We are part of this great City of Chattanooga and should unite with our neighbors during these tragic times.

A representative of Abdulazeez’s family told reporters July 19 that the young man’s relatives feel his personal struggles were at the heart of the shootings, because he had suffered from depression since he was a teen and also had fought drug and alcohol abuse.

Bill Brewer, editor of The East Tennessee Catholic, contributed to this story.