Preparing for a MERCY-ful Advent, Christmas 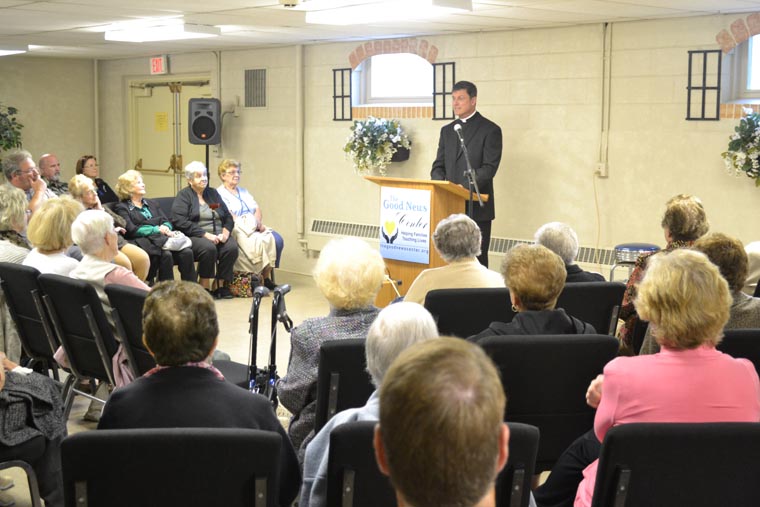 It is never too early to begin thinking about Christmas. Even before Halloween, a luncheon was held at The Good News Center in Utica to discuss the topic of “Saints and Sinners” and preparing for this special time of Christ’s birth. The discussion followed Mass and confession.

The guest speaker was Father Paul Madej, recently retired from a military career. He discussed some of his war zone experiences: “They say there are no atheists on the battlefield. Even those who do not believe know there is something out there, even if they don’t know what it is.”

A native of Utica, Father Madej attended Holy Trinity Church and Holy Trinity Elementary School in Utica. He graduated from Notre Dame High School and studied at Wadhams Hall Seminary and Le Moyne College before completing his studies at The American College of Louvain in Belgium. He was ordained in 1990.

Father Madej asked the audience what they do to prepare for Christmas and received assorted answers, including exchanging Christmas cards. “We do the same thing in the military. We train to fight and fight the way we train. In any mission, we have a goal and we plan backwards for it. Like what you do for Christmas or your schedule for your week.” In order to send out Christmas cards, one must compile an address list, purchase cards, stamp the envelopes and mail them — backwards planning, he explained.

He said, “You backwards plan by asking yourself where you want to be spiritually this Christmas.” Then, he said, we should focus on five things, one during each week of Advent. An acronym, where each letter of a word represents a different concept, can provide helpful guidance. Father Madej said that in this case the acronym is “M.E.R.C.Y.”

The “M” begins in the first week of Advent and represents the word “motivate.” “Motivate yourself that all things are still possible and through examination of where you want to be,” he said. This is illustrated in Psalm 25: “To you, O Lord, I lift up my soul.” And in Luke 21:36: He guides the humble “be vigilant at all times and pray that you have the strength to escape tribulations.”

In the second week of Advent, the “E” represents the word “eliminate.” Father Madej told the audience, “Eliminate your most fun sins. Trust in God more than being stuck in sin.” He recommended that people pick just one sin to work on and suggested one that continues to be confessed in the sacrament of Reconciliation, citing “Take off your robes of misery, put on the splendor of God” (Baruch 5).

Resting in the Lord is represented by the “R” during the third week of Advent, he explained. “Rest in the Lord through prayer, laughter, obedience and relationships,” Father Madej said. He asked the audience if it is more difficult to ask yourself or God for forgiveness. “Because we never want to disappoint, the third week of Advent is about trying to move beyond your sins and problems,” he said. Zephaniah 3 says, “Shout for joy o daughter, the Lord has removed judgement from you.”

Father Madej suggested that the fourth week of Advent is a time to address conflict and confrontation as represented by the letter “C” in “M.E.R.C.Y.” “It is a time to let go of conflicts, broken relationships and grief,” he said, adding that it is important to not let conflicts and confrontation control you, to make room for love and humility and to allow God to be our defense. In Luke 1 when Mary visits Elizabeth, it says, “Blessed are you who believe what was spoken to you by the Lord would be fulfilled.” Father Madej said the fourth week of Advent is about turning conflict into joy.

Finally, the letter “Y” represents saying “yes” to God’s mercy by accepting Jesus more fully into your life and letting the power of past sins dissipate, he explained.

In Matthew 1, Jesus’ genealogy is discussed, which includes many types of people and sinners, but yet Christ is born, Father Madej said. “Saints and sinners alike, we train the way we fight and we fight the way we train,” he concluded. “You need to look at yourself and ask what is the thing that is going to be fixed, get rid of the place in your heart that is bad and replace it with God.”

Dyann Nashton is a writer from Oneida, N.Y., in the Eastern Region of the Diocese of Syracuse.