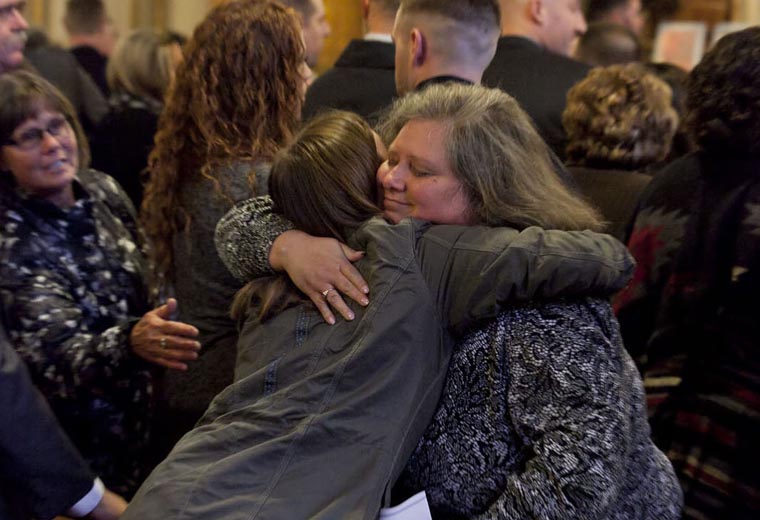 By Emily Benson Catholic News Service
AMSTERDAM, N.Y. (CNS) — A tragic limousine crash in Schoharie that took the lives of 20 people just the week before has changed “our lives, our community” forever, Peter Rose said in welcoming the congregation at the funeral Mass for eight of the victims Oct. 13 at St. Stanislaus Church in Amsterdam.

“In a time of so much darkness, so much pain, you will leave here today enfolded in the love of Jesus and the love of this community,” he said.

Rose, of Betz, Rossi, Bellinger and Stewart Family funeral homes, spoke of how the community would continue to support one another in love, “because we are Amsterdam strong.”

About 800 people filled the church as family, friends and community members all gathered to offer their condolences and support. Prayer intentions mentioned not just the victims and their loved ones, but the first responders and all those present.

Remembered in prayer were the four King sisters, their husbands and the brother of one of the husbands: Mary King Dyson and Robert Dyson, Allison King, Abigail King Jackson and Adam Jackson, Amy King Steenburg and Axel Steenburg, and Richard Steenburg Jr.

Father O. Robert DeMartinis, pastor, presided at the funeral Mass. At the front of the sanctuary, eight images — one of each victim — were placed along with the urns that held their remains, with flowers and other objects below the photos.

Father DeMartinis blessed each with holy water as he prayed: “Lord, we commend Abigail, Adam, Mary, Robert, Allison, Amy, Axel and Richard into your hands. We send them into your peace.”

Vincent Rossi read a passage from St. Paul’s Second Letter to the Corinthians, which reads in part: “Do not lose heart. … For we know that if the earthly tent we live in is destroyed, we have a building from God, a house not made with hands, eternal in the heavens.”

Boxes of tissues were placed in each pew and used by many Massgoers. Throughout the service, guests comforted one another and offered shoulders to cry on during particularly difficult moments. During the Lord’s Prayer, a family reached across the pews to clasp hands.

In his homily, Father DeMartinis tried to address the question of why 20 souls were taken too soon. He recounted a story about St.Teresa of Kolkata, whom a journalist once asked whether she ever cried out to heaven, “Why,” as she cared for the desperately poor and dying.

“And that, my brothers and sisters, is what you and I are doing here this afternoon: We are putting all of our hope, all of our faith and all of our trust in Jesus,” Father DeMartinis said.

The pastor spoke of how each one of the victims, while no longer in this world, are now alive with the Lord. He added his assurance that the group was able to celebrate Amy Steenburg’s 30th birthday together with God.

On Oct. 6, the close group of friends and family had been on their way to celebrate Amy’s birthday at in Cooperstown when the limousine in which they rode crashed in Schoharie.

Father DeMartinis recalled how he helped prepare Amy and Axel Steenburg for their wedding day and officiated at their wedding. He brought a painted sign to show during his homily that the couple had made and accidentally left behind after their wedding ceremony.

The sign read, “Please no pictures,” and showed an image of a camera with a slash through it. Below the camera was a message: “We suggest you live in the moment.”

“That is what they are asking you to do today,” Father DeMartinis said. “You and I cannot stay in Oct. 6; you and I must move on. As difficult as it may be, we must live in the present moment, because that is what they would want us to do.”