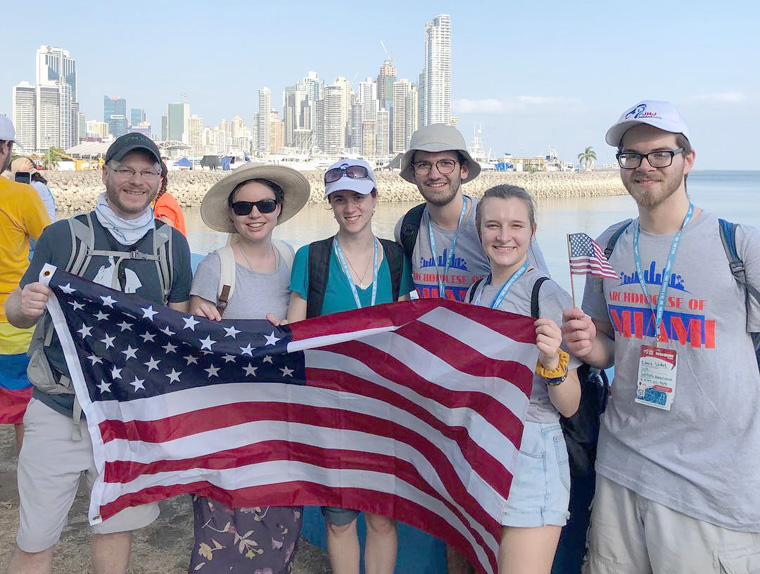 Editor’s note: Pilgrims from around the globe gathered in Panama for World Youth Day Jan. 22 to 27. Six of those pilgrims were a group from the Diocese of Syracuse. Here are reflections from three of them.

The view at the vigil site at World Youth Day in Panama. (Photo courtesy Nick Calaprico)

Arriving in Panama City, I was unsure what to expect. After an awesome experience at World Youth Day Krakow, I was excited to see what this WYD would bring. The streets were empty as we had arrived late and missed the opening ceremony. Tomorrow would be the start to the whole experience, and let me tell you, it was definitely an experience.

We walked in the 90-degree sun to our catechesis site, where we were able to hear a talk given by the Archbishop of Miami in an extremely hot gym. But what made it really nice was the intimacy felt in the small group of 300 of your closest friends, all there to hear and experience the same thing.

The best part of a WYD is the trek to the vigil site. The vigil site is where we spend the night after adoration with Pope Francis and await the upcoming morning for Mass with a million others of our Catholic family. This may have been where my faith really was shown. As we walked down the streets of Panama in direct sun and extreme humidity, our legs began to feel week and our mouths dry from dehydration. But in suffering is where God’s grace is greatly shown. I reflected on those at home, those who’ve always kept me in their prayers and assisted me with the development of my faith. I offered all my suffering up to God for them. Any other day I may have just quit, or simply said it’s not worth it, but this was worth any suffering I could imagine. To share the sacraments of the Church with people all over the world believing in the same thing I do. To show the people of Panama and really the world that the youth are here and are on fire to call themselves Catholic and spread the good news that Jesus has died for our sins.

Each World Youth Day is unique in its own way. It shows you who you are as a disciple of Christ. I encourage and invite any youth to join in on this amazing experience in Portugal 2022. 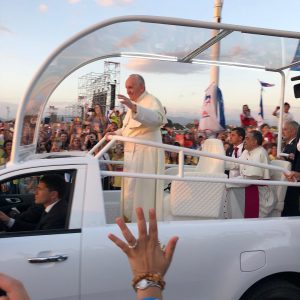 Less than a week ago, I flew south to join with hundreds of thousands of other pilgrims to witness the Holy Father leading the sixteenth World Youth Day in Panamá. Going into it, I was hoping my pilgrimage to see the Pope would result in a renewed passion for my faith, but I really had no idea what I was getting myself into. To put it bluntly, every aspect of the experience was truly life changing.

Seeing Pope Francis from a few feet away as he drove by was an unforgettable enough experience on its own, but to hear him speak directly to you as you stand shoulder-to-shoulder with the youth of the world took my breath away more times than I can count. Hearing his words as he told us to be strong, to fight for innocents and defend hope, as he told us we are the present, the Church of today, the living Church. A Church that despite the horrors it is subject to in this society of hate, is on fire with hope and compassion.

For me, standing in a seemingly endless sea of young Catholics, a giant field and a starry sky being the only cathedral that could hold us, it was easy to forget about the half-full church I had left back home. But in that sea of youth was so much hope and encouragement, not only in my fellow young pilgrims, but also in the young adults I met who I can look up to as mentors and models of the faith. The assurance I felt to be among so many like-minded young people is equal to the relief I found in the profound faith of the young adults who are guiding us into tomorrow.

I have heard it said that young people don’t care about the Church. This, I can tell you, is not true. We are here, alive and breathing, trying our best to live the word of God and to rise to the challenge of Pope Francis who has called us to say yes to God at work in our lives. We are here, we are the Church of the present.

During his World Youth Day Mass Pope Francis said, “The ‘now of God’ becomes present with Jesus. It is a merciful love that does not wait for ideal or perfect situations to show itself, nor does it accept excuses for its appearance. It is God’s time that makes every situation and place both right and proper. In Jesus, the promised future begins and becomes life.”

World Youth Day was an exercise in being present. I would not describe the experience as being “ideal or perfect.” My feet accumulated blisters and scrapes, my skin burned in the equatorial heat, and I did not sleep more than six hours a night for the week that we traveled. But I felt joy during every moment of the experience. I watched the sun rise and the parrots fly. I saw pilgrims wave the flags of a multitude of countries. I watched a smiling Pope Francis speed by in the Popemobile.

I came to Panama with the hope that somewhere in the experience I would find reassurance. World Youth Day is the Church in all its one, holy, catholic, and apostolic glory. The community of one million other Catholics at Mass, the Pope’s words, and the beauty of Panama have reassured me in my relationship with Jesus Christ. I returned tired, but renewed.