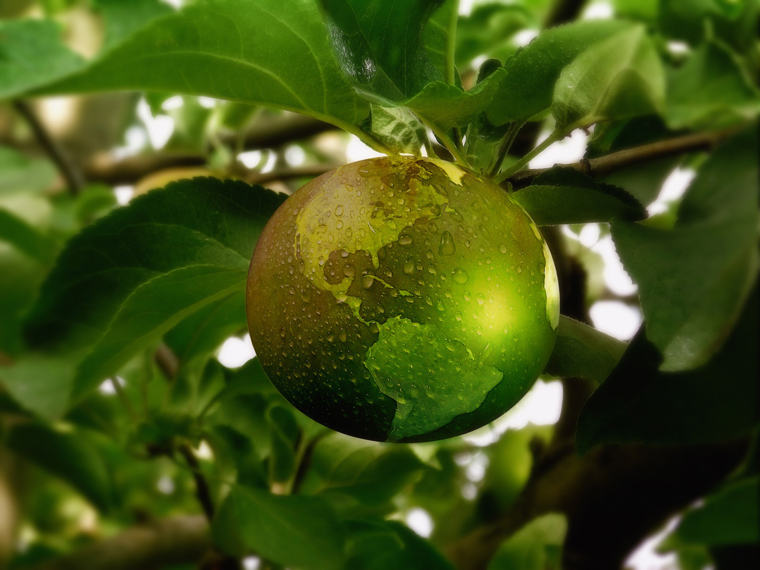 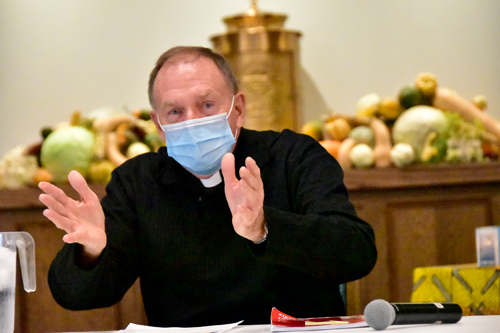 Father Frederick Daley, pastor of All Saints Church in Syracuse, says the “continual abuse of the planet” is probably “THE most critical crisis of our time.” (Sun photo | Tom Maguire)

All Saints Church in Syracuse is already acting in the spirit of the Vatican’s seven-year plan to widen the reach of Pope Francis’ 2015 encyclical on the environment.

“We just changed all the lighting in all of our buildings to LED with a wonderful support of National Grid; we’re … investigating putting in two electric chargers in our parking lot where cars can charge,” the pastor, Father Frederick Daley, said Nov. 17 at his church, where religious leaders gathered to “call for all people to halt climate destruction and create a sustainable Earth.”

“We are beyond the point where Mother Earth can contain the continual abuse of the planet,” Father Daley said. “And when we’re in a crisis, as we know historically, we have a choice. We can change the way we are living together, the human community, with all the creatures of the world, or we can disintegrate and die. Our hope here today is that the institution of religion globally and locally here in Syracuse can be one of the major movers of bringing the global community and the local community to wake up to have the power and grace to change our way of life.”

“It’s hard having people focus on this issue” of the environment, Father Daley said. “And yet we’re on the brink. It’s really a matter of life or death.”

Dave Babcock, chair of the Care for our Common Home (Laudato Si’) Task Force for the Diocese of Syracuse, says that most recently, the task force has done the following activities since Pope Francis issued Laudato Si’ in 2015:

• Prepared and presented with the Diocese of Ogdensburg a three-evening event about how we can better see, judge and act on behalf of God’s creation (included prayer, music, reflections, teachings and stories to raise awareness and promote actions);

• Promoted formation of parish creation-care teams throughout our diocese;

• Worked to cut use of fossil fuels individually and with parishes through the HeatSmart CNY program;

• Begun to advocate for structural changes to better care for creation in New York State in particular.

Asked how someone who is not a governmental official can do anything substantive about climate change, Father Daley said the reality is that “significant change always comes from the bottom up. It’s the people that ultimately pressure those on the top to change. … Our addictive consumerism in the West has already brought us beyond sustainability. The global village cannot sustain where we are now. People are dying today because of the situation of climate change.”

He said people are starving in places that are deserts now but existed as productive farmland as recently as 20 or 30 years ago. “The sad thing is, the poorest nations of the world are polluting the world the least,” he said, “and yet they’re suffering … the most.” He cited Guatemala, where he said fertile farmland is turning into desert. “They’re coming here for the necessities of life,” he said.

“In Guatemala you have farmers who have lived sustainable lives for centuries; they can no longer do that because it’s either flooding or drought,” said the Rt. Rev. Dr. DeDe Duncan-Probe, Bishop of the Episcopal Diocese of Central New York.

Bishop Duncan-Probe said, “What we seldom talk about is that there are 9.8 million children who were devastated by the impacts of climate change in 2020.” She said one study looked at how climate change is impacting our current weather. “It is estimated that by 2070,” she said, “the weather in Central New York will be much more akin to the weather currently in South Carolina and Georgia. … It will vacillate from extreme winter to more extreme summers than we are used to.”

Speakers also cited flooding in Michigan and Washington State and also in Miami. Flooding was noted recently even in Syracuse, said audience member Dave Pasinski, a parishioner at St. Lucy’s in Syracuse.

People can take small steps to protect the environment, according to another speaker, the Rev. Eric Jackson, Pastor of Plymouth Congregational Church, United Church of Christ, in Syracuse. For example, he said a person could say: “One day a week, we are going to be intentional about recycling. … It does have impact.” Other conservation methods he cited are installing solar panels and spending a day not using paper. And a speaker from the audience suggested “something as simple as” combining five trips a day into one trip.

Other communities in the downtown area that have gotten together to proclaim the need for change, Father Daley said, include the Roman Catholic Cathedral of the Immaculate Conception and Park Central Presbyterian Church.

Audience member Linda Zimmerman, Regional Director, Syracuse, of the Ignatian Volunteer Corps, spoke of “our own behavior—how does that impact others?”

“I think Linda’s question is the question of the day,” Father Daley said, “and I think our challenge of today is that all religions come together locally and put our efforts together in encouraging the greater community to get involved. Religious communities really are the heart of, I think, a renewal in this whole area; we can be on the cutting edge. … Mother Earth is in trouble.”

For further information, go to https://syracusediocese.org/being-catholic/pope-francis/laudato-si/.