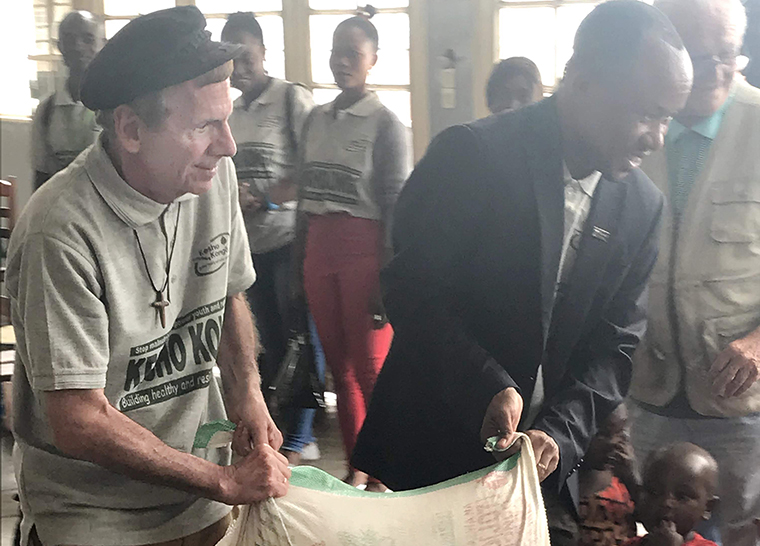 He was a man for Africa who retained his popularity at home as well.

Peter William Daino Jr., 69, who was an administrator for several years at All Saints Church in Syracuse, died July 11 at Rochester General Hospital. Father Frederick Daley, pastor of All Saints, said Daino died of viral pneumonia. The funeral Mass was on July 15 at Church of the Holy Family in Endwell.

“Peter was a missionary at heart,” Father Daley said, who “gave his life in service to others and especially to his sisters and brothers in various countries in Africa. … The Blessed Mother was his model of saying yes — yes to the Spirit, no matter what that might entail. … His whole life was making bridges between the Church in Africa and the Church in the United States, and very important that he was a Marianist brother.”

Affiliated with Church of the Holy Family and the Peace Corps, Daino was a brother with the Marinist Society for 40 years during which he was placed in the countries of Kenya, Malawi and Zambia in Africa, his obituary says.

“Peter lived Matthew 25:31-46,” Paul Welch, director of the diocesan Social Justice Ministry, said in an email. The Bible passage says,  “‘When did we see you hungry …?’”

“Peter Daino was a tireless advocate for the poor who viewed the world as God’s vineyard and saw the face of Jesus in everyone he met,” Deacon Daniel H. Stevens, director of the diocesan Office of Pontifical Mission Societies, said in an email.

“He loved Africa, he loved the people of Africa,” said Dr. Dale Avers, who, on behalf of All Saints, went on a Congo Mission with Daino and Papy Amani, who goes to All Saints and heads the Congolese community in Syracuse.

‘Man of the universe’

“I would agree that he was a man of the universe,” said Ed Rent, a resident of Bartow, Fla., who in 1971 graduated with Daino from what was then called Seton High School in Endicott. “If you look at his Facebook site that his family took over so they could get information out to everybody that were friends with him, there are literally hundreds of people writing and feeling sympathy and how we’re gonna miss him so much. And a good majority of them are from his friends in Africa. … Like one of our classmates said, ‘He had the express elevator when he left.’”

In March 2020, the Catholic Sun published Danio’s article about the Congo Mission to two locales, Bukavu and Uvira, undertaken as an outreach ministry of All Saints. He wrote:

“Folks fleeing Eastern Congo constitute the largest population of refugees accepted into the USA last year. In fact, in Syracuse there is a Congolese Association of Onondaga County with more than a thousand members. We went in particular to visit two projects: a nutrition initiative for children and a women-empowerment project. …

“We were not an army but we were armed with the spiritual armor Saint Paul describes — the shield of faith, the breastplate of love. For five days we were in Bukavu, a city of half a million people, visiting Kesho Congo (Future Congo). It is the nutrition project started by Dr. Adolphe Nyakasane in Bukavu; it makes enhanced protein biscuits. At several nutrition centers we gave out the biscuits. …

“Then for eight days we were in Uvira, a city of 180,000 people, visiting Human Solidarity of Congo. … Women are learning literacy and tailoring. The women also participate in a loan program to help them create small businesses. Thanks to literacy, job skills and loans, hundreds of poor women are making their families’ food self-reliant, preventing their children from falling into malnutrition. …

“I want to challenge each and every one of you in the diocese — by virtue of your baptism, you are a missionary!”

Dr. Avers gave an example of how Daino was a “saint among men.”

At a hospital in Uvira, the All Saints representatives met a man who needed to have his gangrenous foot amputated because of diabetes. But the man had no money to go to the next country over, Burundi, only a few miles away, for the operation.

“And Peter very quietly, without anyone knowing, paid the cash to get that man the care he needed,” Dr. Avers said. “And that was Peter. … always doing those things. … He didn’t see limitations, he only saw possibilities.”

Dr. Avers, a professor of physical therapy at Upstate Medical University, said she has to fill the “very big shoes of Peter’s” because now she helps lead the Congo Mission at All Saints.

She has created a pamphlet in advance of a mission appeal the first weekend in August at three churches in the Diocese of Syracuse: St. Matthew, East Syracuse; St. Francis of Assisi, Bridgeport; and St. Mary of the Assumption, Minoa. The pamphlet describes efforts to address malnutrition and education. For example, the effort promotes “empowerment of rural women through cooperatives to promote agriculture and livestock farming.”

Daino classmate Rent said that last September, the 50th-year Seton reunion was the first one Daino ever attended “because he was always doing his mission work. … So it was really heartening for everybody in our class; we had about 45 show up for the reunion, and everybody wanted to talk to Peter.”

The class had raised about $2,300 for any classmates who needed financial assistance to attend, but there were no takers. So Rent said the class donated half to Mercy House in Endicott and half to Daino for “whatever he felt the need to do. … He was trying to get back to help build a new school.”

Daino’s ministry was brave as well as merciful. In 2020 he told the Sun that in 2011 in southeastern Africa, robbers stole $5,000 that his father had given him back in his native Endwell. “He encountered mercenaries and African military who challenged him, put guns in his face,” Rent said. And Daino told him he contracted diseases like dysentery countless times.