‘Set apart for service’: Father Nathan Brooks ordained for the Diocese of Syracuse 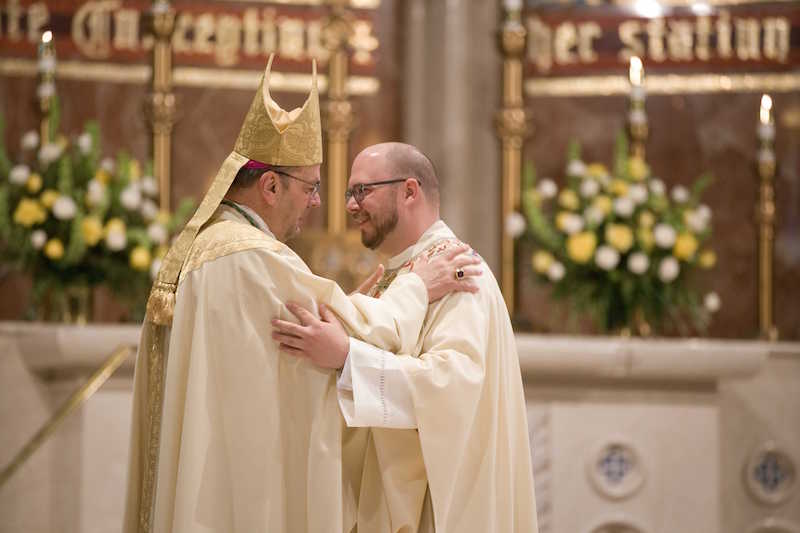 True to form, the newest priest of the Diocese of Syracuse declared his ordination Mass “awesome.” 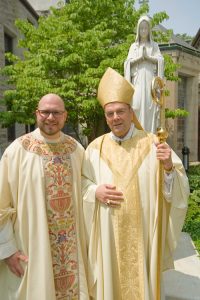 Father Nathan Brooks was ordained June 1 in a Mass celebrated by Bishop Robert J. Cunningham at the Cathedral of the Immaculate Conception. The bishop was joined by dozens of clergy and religious and the pews were filled with Father Brooks’ family, friends, and supporters.

Ordination day marked the final step on a journey Father Brooks, 32, began many years ago. As a young man, Nathan — the second of Patee and Randy Brooks’ three sons — didn’t envision his future as a priest, but “my mom used to say all the time, ‘One of you is going to be a priest.’ No one thought it was going to be me,” he told the Sun before his Rite of Candidacy in 2017. 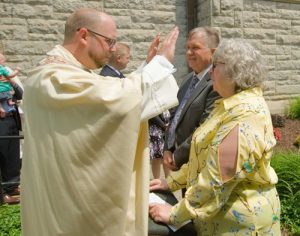 In the Cathedral’s prayer garden following ordination, as the new Father Brooks conferred blessings on a sprawling line of well-wishers, Patee offered the same assessment of the day as her son: “It’s awesome. I don’t even know what other words to use.”

Having watched her son pursue his vocation over seven years of formation, Patee said Father Brooks is “totally filled with joy.” “I know he’ll be an awesome priest,” she added.

In an interview with the Sun the afternoon before ordination, Father Brooks emphasized the support he received from his family during his years of formation, which followed several years of working in the hotel industry and as a logistics team leader for Target.

Bishop Cunningham preached a homily specifically for the ordinand, reminding him, “you are entrusted with this ministry by God, who in his great love set his heart on you.”

“Nathan, you are about to be set apart for service,” the bishop continued. “With faith you have answered the Lord’s invitation to be one of his servants. Follow the example given to you by Christ — teacher, priest, and shepherd — as well as by other sacred ministers who have preceded you.”

“Be a good shepherd. Embrace God’s people and remember how you are linked to them,” he said.

Following the homily, Father Brooks declared himself willing to be ordained. Kneeling and placing his hands inside the bishop’s, he promised obedience to the bishop and his successors.

He then prostrated himself in the sanctuary, signifying his submission to God’s will, as the congregation prayed the Litany of Supplication. 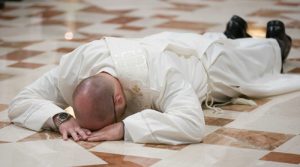 Father Brooks prostrates himself during the Litany of Supplication. (Sun photo | Chuck Wainwright)

Those moments were among the most emotional of the day, Father Brooks said. “I started thinking of my grandparents” — the late Deacon Leo Matzke and the late Joyce Matzke — “and wishing they were there,” he said. 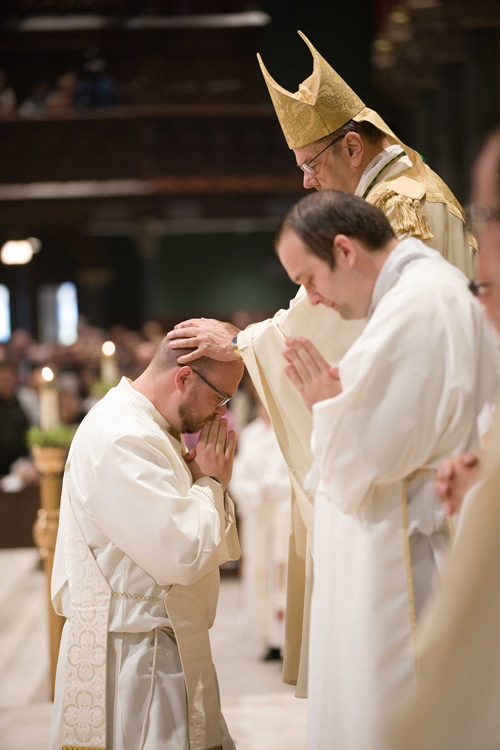 Bishop Cunningham places his hands on Father Brooks’ head in prayer, a sign of consecration to the Order of the Priesthood. (Sun photo | Chuck Wainwright)

Following the litany, Bishop Cunningham placed his hands on Father Brooks’ head in silent prayer, a sign of consecration to the Order of the Priesthood. The bishop then offered the Prayer of Ordination, completing the Sacrament of Ordination.

Father Brooks called upon two priestly mentors to vest him in the stole and chasuble of a priest: Father Joe O’Connor, diocesan director of Vocation Promotion and pastor of St. Elizabeth Ann Seton Parish in Baldwinsville, and Father Philip Hearn, pastor of St. Mary-St. Peter’s Church in Rome.

Father O’Connor, who was ordained in 2005, said Father Brooks was the first ordinand to ask him to be a vesting chaplain and that he was struck by “the joy of being with [Brooks] — aware or not — for so many steps” along his journey to the priesthood. “I know he’s going to make a good priest,” he said.

Father Brooks chose Father Hearn because “he’s a priest that I truly look at as a role model,” he said. Father Brooks was stationed at St. Mary-St. Peter for the summer after his first year at seminary and he came to know Father Hearn as a friend and mentor, a “very holy guy who puts everyone before himself.” 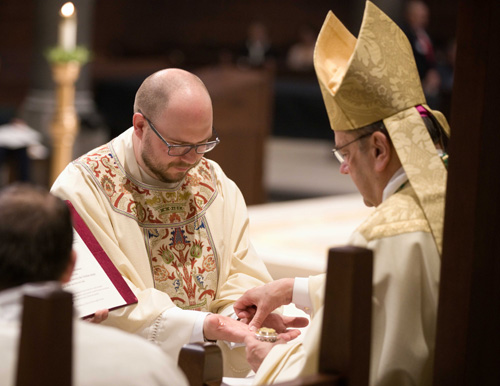 Bishop Cunningham anointed the new priest’s hands with Sacred Chrism and presented him with the gifts of bread and wine. He then concluded the rite by offering the Sign of Peace, with all of Father Brooks’ brother priests following suit.

Father Brooks noted how much he appreciated the support of all surrounding him at the Mass — family, friends, new brother priests, and his bishop.

“Not every seminarian gets to be as connected to their bishop as we are here in the Diocese of Syracuse, and that is just such a powerful experience,” he said. “Bishop Cunningham knows me. He doesn’t just know me on paper; he actually knows who I am, laughs with me, knows that I say ‘cool’ and ‘awesome’ all the time and makes fun of me for that. That means the world to me — being ordained by a bishop who I think I can call my friend was just awesome.” 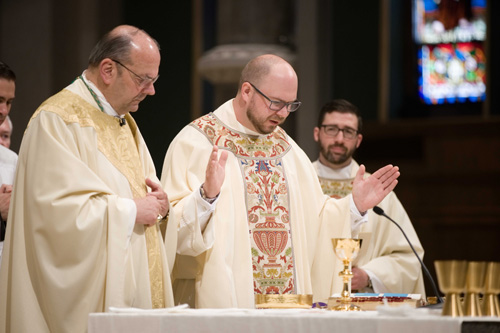 He is a man with a servant’s heart, he’s attentive to people, he’s a good listener, and he wants to be holy.”

Father Brooks began his ministry right away, celebrating his first Mass at his home parish at 2 p.m. on June 2. And come July 1, he will begin his first pastoral assignment: parochial vicar of St. Mary Church and St. Anthony Church in Cortland.

Before ordination, Father Brooks said he was looking forward to the joys of celebrating Mass and the Sacrament of Confession. And while there may be challenges ahead in his life as a priest, “I feel like God’s been preparing me for this my entire life.”