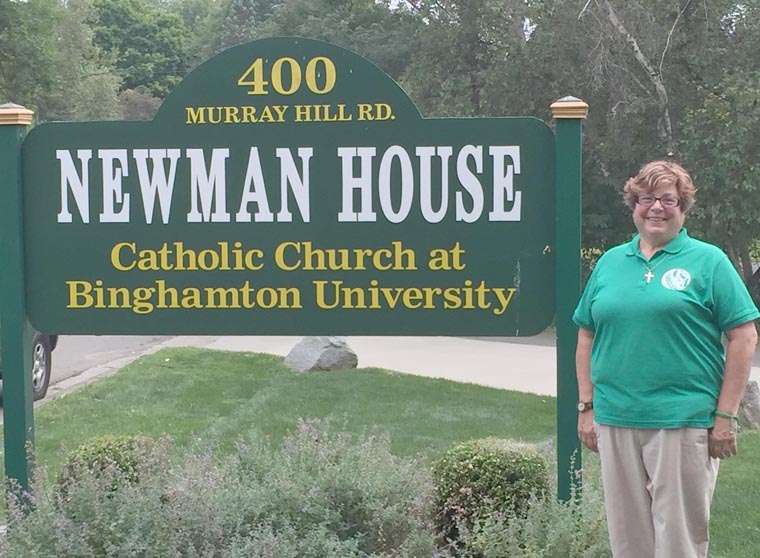 Sister Rosemary Casaleno, CSJ, newly appointed director of Catholic Campus Ministry at Binghamton University, is excited about her new position at the school. “It’s been great so far,” Sister Rosemary said, as she settled into her office in the Newman House in Vestal a few days before the students arrived back on campus. “I’m really happy to be here. It’s a new beginning for the Newman House. My hope is that we will continue to stay vibrant.”

Sister Rosemary said she is looking forward to “the excitement of being with young people and sharing their spirituality.”

“It’s a privilege for me to journey with them, to take them to the next level of their spiritual life,” she added.

Sister Rosemary is following in the footsteps of Father Corey van Kuren, who is now pastor of St. Vincent de Paul Blessed Sacrament Church in Vestal. He will continue to serve the Binghamton University Catholic Community through priestly ministry.

Sister Rosemary brings a wealth of knowledge and experience to her new ministry. She earned a master’s degree in social work, specializing in child welfare from Syracuse University. She served as a clinical child therapist in Albany, Watertown and Saranac Lake.

Before taking on her new position at Binghamton University, Sister Rosemary served as director of youth ministry at St. James Parish in Cazenovia, a position she held from August 2013. Before that, she served as youth minister for the St. Edward the Confessor Catholic Community in Clifton Park, N.Y. In addition, she served as youth director of the Diocese of Ogdensburg from 2003 to 2005.

Sister Rosemary believes that her experience in youth ministry will help her in the new position “tremendously.” As director, she plans to involve the Binghamton University young people in service projects and trips.
“The maturity level makes a difference,” Sister Rosemary noted. “There might be a little more freedom in what I can do [in the ministry].”

Sister Rosemary said that one of her main goals is to engage the students on a high level. “I want to keep them active and keep the Newman House alive,” she stated. “I want to be really present to the young people on campus. That means that I’ll be going to basketball games and things like that.”