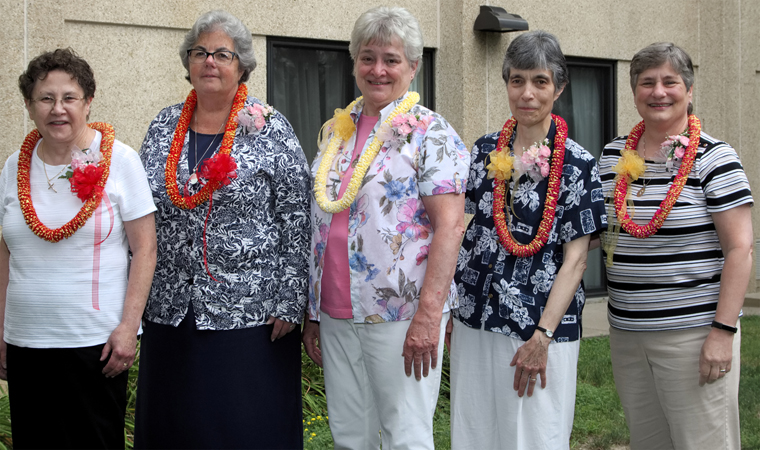 During their four-day General Chapter 2021 in Buffalo, the 90 delegate-sisters of the Sisters of St. Francis of the Neumann Communities have elected a new Leadership Team.

Since 2000, Sister James Peter, a Central New York native, has ministered as a nurse at the Poverello Health Clinic. The facility, an offshoot of the Franciscan Northside Ministries of Assumption Church, provides free medical care to people without health insurance in CNY.

Sister James Peter and her fellow leadership members will take office following installation ceremonies scheduled for Sept. 18 in Syracuse, where the community maintains its congregational offices.

The team’s election took place one year later than originally planned. When the coronavirus pandemic prevented sisters from gathering in July 2020, the existing leadership team sought Vatican approval to extend its term.

Delegates came from Buffalo, Syracuse and Mount Vernon (Westchester County), Maryland, Florida, Illinois, New Mexico, Pennsylvania, South Carolina and Hawaii. Peru was the only area that is part of the congregation that was not able to send delegates, due to pandemic restrictions.

The sisters also accepted a Directional Statement to guide the community’s actions for the next four years. It calls for the sisters to deepen their Franciscan Ministry of Presence where they live, serve as advocates for those living in poverty, and collaborate with other Franciscan organizations in promoting Catholic social teaching.

In accepting their new positions, the Leadership Team members reminded the delegates they will need the support and input of the entire congregation of sisters in guiding the community into the future.

The Sisters of St. Francis of the Neumann Communities was formed when three New York–based congregations of Franciscan sisters united with a community in Pittsburgh, Pa. The community of 290 sisters ministers throughout the U.S. in education, health care, parish assistance, immigration support and the arts, serving in schools, parishes, hospitals, hospices and elder-care and day-care centers.