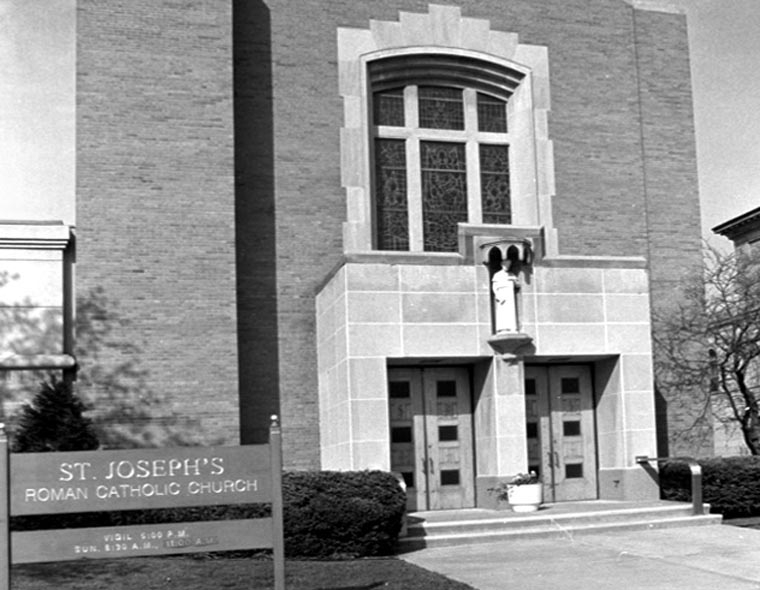 The parishioners of St. Joseph’s Church in Oswego will begin celebrating the parish’s centennial year with a special Mass on April 26 at 11 a.m. Many of the parishioners are direct descendants of the church’s founders.

“Being a parish that is rooted in history, we have a wonderful heritage of families who have worshiped at St. Joseph’s for generations,” said Father Gregory Kreinheder, pastor of St. Joseph’s. “We also have a number of folks who have joined the community more recently. It is refreshing to see these new members and families integrated into the larger family of faith. Even though many take pride in the fact that their families have been a part of the parish from its founding, the community is inclusive of those ‘newcomers’ who want to be a part of St. Joseph’s parish family. While we recognize our ethnic roots of Italian heritage, the community has grown to be much more diverse in a way that is reflective of the broader Church.”

Bishop Robert Cunningham will celebrate the Mass. Following the Mass, a luncheon will be held at Alexandria’s at the Lake Ontario Event and Conference Center in Oswego. The public is invited to attend the Mass and luncheon.

Jennifer Gordon, faith formation teacher at St. Joseph’s, is planning to attend the anniversary Mass and luncheon with her family. Gordon, her husband Matt, and their three children have been members of St. Joseph’s for the last two years.

“I’m very excited to be part of this special event and the continuing legacy of St. Joseph’s Church,” said Gordon. “I’m sure it’s pretty clear how I feel about the church, but I want to reiterate my love for this parish. Father Greg is a wonderful evangelist. His interest is not in entertaining his parishioners, but rather enlightening and engaging them. He serves the Lord with humility and embraces his humanity. He never forgets to recognize those who make the Mass run smoothly and always seems calm and welcoming. I love the church family as well. It’s a loving family that I love to visit every Sunday. My favorite part of being a member at St. Joseph’s is my Sunday school students, who give me a forum every week to share my love for Jesus Christ and the tremendous sacrifices He made for us.”

Laura Munski, business administrator at St. Joseph’s who is preparing a centennial anniversary book to be published later this year, provided a history of the church.

St. Joseph’s was established in 1915 to serve the 2,500 Italian immigrants who had been worshipping in various churches located throughout Oswego. None of the churches were Italian.

On Easter Sunday, the Italian immigrants celebrated their first Mass at Hennessey Hall on East First St. Nearly 500 people attended.  During the summer of 1916, leaders of the church purchased the former Universalist Church on West Second St., because it was centrally located. The first services were held there on September 29, 1916.

During the 1930s and 1940s, sports played a dominant part in the parishioners’ lives. The church competed heavily with other churches in softball, baseball, dartball and bowling.

In the 1940s and 1950s, with the parish growing, several properties surrounding the church were purchased to provide room for a larger church. A residence located south of the church was purchased for a convent and the Sisters of St. Joseph of Carondelet established a catechetical center. Later, the convent was moved around the corner to a new location.

In June 1944, the present rectory at 178 West Second St. was obtained in an exchange of property and an additional payment of $2,700.

On April 27, 1958, the new St. Joseph’s Church was dedicated as one of the most beautiful churches in the state by Bishop Walter Foery, bishop of the Syracuse Diocese. The cost to build the new church exceeded $500,000.

Celebrating Mardi Gras was very important to St. Joseph’s parishioners during the 1960s through the 1980s, according to Munski. The event drew close to 300 people each year and they dressed in elaborate costumes.

St. Joseph’s is renowned for its annual summer bazaar, the Festival Italiano. Italian cuisine is the main staple at the bazaar. “Each of those two days employs over 75 volunteers to make it the premier bazaar in Oswego — something the parishioners are quite proud of,” said Munski.

During the 1990s, St. Joseph’s established a citywide youth group for teenagers of any faith. The group started with two teens, but now averages about 20. Meeting every two weeks, they participate in fundraising, World Youth Day, church events and recreational activities.

Lifelong parishioner Joseph Murabito has served at St. Joseph’s for most of his life and has many fond memories. At 95 years old, Murabito has retired from his volunteer efforts. He began serving as an altar server under Father Filomeno Geremia. He remembers the pastor as a kind and funny man. “He was short and stocky, and he was just as kind as he was big,” recalled Murabito. “He had a night stick and he was always waving it at us kids, but he never touched us — he loved us all.”

He also told a story of when Father Jeremiah Davern first arrived at St. Joseph’s. “When people found out that he was Irish, they asked, ‘What does this Irishman want to do here?’ Then, Father Davern started to speak in Italian and they liked him,” said Murabito. “We adored him because he did an awful lot for us kids [altar servers]. He took us altar boys to Fair Haven Beach. He was very laid back and he could sell you the Brooklyn Bridge. He loved basketball and sponsored two teams.”

Murabito also remembered how the church overflowed with people who often stood outside on the church steps to hear him speak.

Murabito talked fondly about the Mardi Gras events. “It was a great endeavor and it was well-received by everyone. He remembered how several of the priests dressed in costumes and everyone had fun while trying to guess who they were. “That’s what it takes to keep the church going,” commented Murabito. “The pastor has to be with the flock.”

Murabito served as an altar server as a young boy and then moved on to a junior usher. Before long, he was head of the entire usher ministry. “I enjoyed every minute of it,” stated Murabito. “It was more rewarding than I ever deserved. Because you are willing to help God, good things come you way. My heart is full.”

In 2008, Father Andrew Baranski arrived to serve as pastor. Because of a shortage of clergy, St. Stephen the King was linked with St. Joseph’s under Father Baranski’s  pastorship. The convent was closed and sold. The religious education programs and the choirs of the two churches were combined.

Father Kreinheder has enjoyed serving as pastor at St. Joseph’s over the last four years.

“It has been a great place to learn how to be a pastor,” he said. “I consider myself fortunate to have started at the parish with a fantastic staff and an eager group of volunteers. These people love their church community, and that kind of love is contagious, and so we have seen the parish grow and flourish over the past four years. This community is deeply rooted in the traditions of the community, and yet is always looking for innovative ways to do more to serve God’s people. I have enjoyed the thirst that our people have to see their parish become a beacon of light in the community of Oswego.
There is a constant desire to grow and develop into the Church that God has called us to be. How delightful it is to be a part of a community that does not desire to stay the same, but to grow ever closer in our relationship to God! A pastor couldn’t ask for much more!”