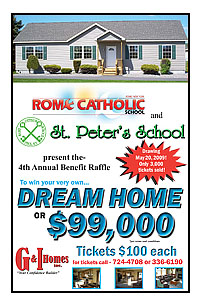 St. Peter’s School in Utica and Rome Catholic School are teaming up in support of the fourth annual Dream Home Raffle this spring.

During its inaugural year, the fund raiser generated $28,000 for the school and in its second, $75,000. Last year, the school received $42,000. a quarter of the school’s financing comes from private fundraisers.

“It’s a very interesting fund raiser and it seems to be very popular. It benefits both schools,” said St. Peter’s Principal Judy Hauck. “We’re always looking for opportunities to create scholarships. Economic times are tough and we want to help out any way that we can.”

Jones said that Rome Catholic is excited about the program. “RCS couldn’t be more enthusiastic about it,” he said.

By including Rome Catholic, St. Peter’s has expanded its range of interest.

“It opens up some new territory for us,” Jones pointed out.

The home is one floor with three bedrooms, a dining room, two large family rooms and a kitchen complete with appliances. It also features a gas fireplace and a sliding patio door.

Last year, the school offered a scholarship promotion program to students at Notre Dame and St. Peter’s. Based on the number of tickets sold, students were eligible for a raffle, which would provide the winner with a scholarship.

This year, the contest is open to students throughout the Syracuse Diocese.
Any school in the diocese including all of the grammar schools will be able to participate in the drawing and benefit from the scholarship promotion,” Jones said.

The program is offering up to $45,000 in scholarships. Seniors who win any of the raffles will have their scholarship money applied to tuition at whichever college they are attending in the fall of 2009.

Elementary schools in the diocese’s Eastern Region are currently experiencing significant changes. Next year, St. Peter’s will merge with Our Lady of Lourdes in Utica and St. Mary’s in Clinton. The new school will be located near Notre Dame Junior/Senior High School and will be named Notre Dame Elementary School. In the long term, both Notre Dame and its namesake will combine in a shared building.

Jones, a St. Peter’s alum, said there is some regret regarding the closure of his former school, but gradually it has been replaced by a sense of anticipation.