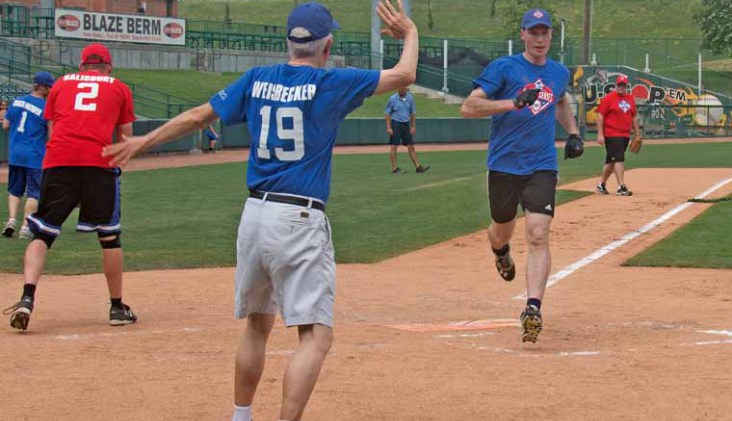 Father James Weeder from the Archdiocese of Omaha, Neb., sprints toward home plate to complete his three-run homer in the first inning of the annual I-80 Collar Series softball game June 17 in Lincoln, Neb. The archdiocesan priests posted a 20-18 win over priests from the Lincoln Diocese, their first victory in four years of the series, which is held to promote vocations. -CNS photo | Dan Rossini, Catholic Voice

Priests from the Archdiocese of Omaha posted a 20-18 win over priests from the Diocese of Lincoln at the annual I-80 Collar Series softball game at Haymarket Park baseball complex in Lincoln — their first victory in the series’ four years.

A three-run home run in the first inning got the archdiocesan priests off to a strong start. Hit by Father James Weeder, pastor of St. Joseph Parish in Atkinson and St. Boniface Parish in Stuart, the line drive down the third-base line into left field stayed in play by about 4 inches. (“If I could only do that with my golf game,” Father Weeder said afterward).

“It was an exciting day,” said Father Frank Baumert, pastor of St. Elizabeth Ann Seton Parish in Omaha, who helped pitch and also hit a single. “We’ve got a few more to win before yelling any ‘championship’ type things.”

The real winner of the June 17 game is vocations support, with all proceeds split between the two dioceses’ vocations offices. Combining donations from the past three years, each diocese has received more than $60,000.

“Everybody wins with this one,” said Father Ross Burkhalter, pastor of St. Anthony Parish in Columbus, told the Catholic Voice, Omaha’s archdiocesan newspaper. He hit a single, drew a walk and got on base on a fielder’s choice.

“It’s a big crowd with a love of the faith, priestly and religious vocations. It was just fabulous,” he said.

Father Weeder played left-center field and had several other hits, but he wasn’t sure how many. “Someone said I had seven RBIs,” he said. “I wasn’t keeping track.”

The important thing was to have a good time with fellow priests and fans at the game, help vocations and promote the faith, he said.

“The game also illustrates that it’s OK to express the faith and pray at the ballpark and other sporting events, not just at home and in church,” he said.