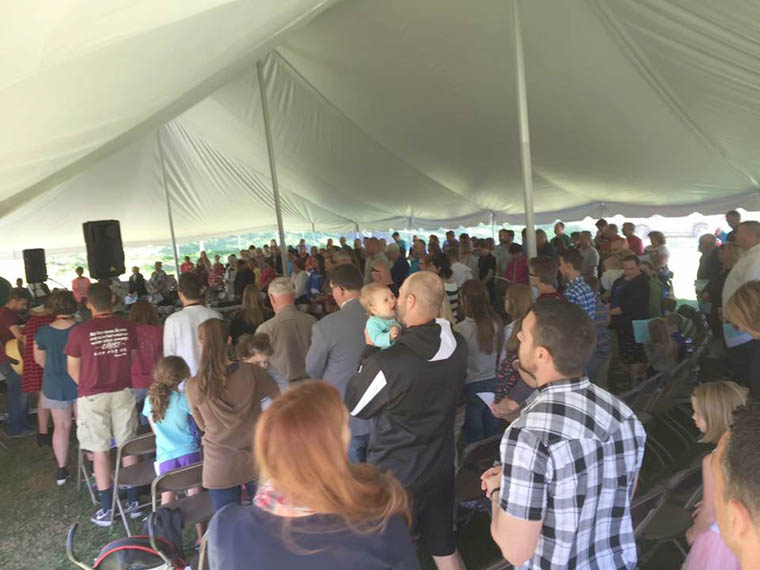 Watch highlights from this event by visiting the Syracuse Catholic Television YouTube channel!

Faithful urged to see God in every person

Sometimes people can get a little lazy in their moral lives.

As a Catholic, “I’m forgiven no matter what I do. Go to confession on Saturday; come to Mass on Sunday and you’re good to go,” said Bobby Angel. “It’s very easy to go onto autopilot,” he said, given the demands of work, children, and family.

Jackie and Bobby Angel, a married couple in their early 30s who live in Orange County, Calif., travel and speak widely about their Catholic faith. Last weekend, they were in Cicero and Central Square for “Awakening: The Astounding Mercy of God.”

Awakening is a national, 40-year-old retreat geared toward college students that focuses on Catholic teachings with music, talks, praise, and worship, and sometimes skits and dancing. It is designed to create excitement and to be inclusive.

“I kind of think of it as a tent revival,” said Mary Hallman, director of the diocese’s Office of Evangelism. And indeed, it took place under tents at the Sacred Heart and Divine Mercy parishes.

Pope St. John Paul II said God calls the faithful to be mystics, to see God everywhere, in every person, Jackie Angel reminded the audience. “Some of us, I think, struggle most with seeing God in ourselves,” she said.

The Angels spoke about reconciliation and the need for intimacy with God. They said that as humans we sin but God wants us to turn back to Him, so He can show us mercy and erase our sin, and bring us close to him. Mercy means to relieve a heart in misery, Jackie Angel told the crowd.

Though Jackie and Bobby speak primarily to teens and young adults, their message resonated with the roughly 130 people -— young and not so young — sitting under a tent Saturday in the back yard at Sacred Heart Parish in Cicero. As Jackie, who also is a songwriter, sang and prayed, several people wiped tears from their eyes.

“Even though we’re older, we forget the basics of our religion; when it’s explained to us again, it awakens us,” said Diana Webb, of Cicero. She has volunteered at Anna’s Pantry, the food pantry at Sacred Heart, for 18 years, and she believes she is doing what God wants, but sometimes, she needs reassurance. “I’ll venture out now and think better of myself,” she said.

For Maria George, of Cicero, who came with her daughter Josie, 13, the day was an opportunity to refresh her soul  after a hectic summer of family graduations and a wedding. She and Josie sat at a picnic table Saturday catching up with friends Scott and Peggy Freeman, of Liverpool, before Jackie and Bobby Angel’s presentation.

“I thought it was a great opportunity to deepen our faith and gain perspective from the speakers,” Scott Freeman said. He said he appreciated the sense of community at the event.

To Peggy Freeman, “It sounded like a great family event.” Several hundred feet away, children played in two bounce houses.

Deepening a sense of community and strengthening people’s faith were at the heart of the decision to bring Awakening to Cicero this year, said Father Richard P. Prior Jr. “I think there’s a lot of people out there hungry for the faith,” he said. “I hope they’ll experience God in a new way, maybe for the first time in a very tangible, real way.”

Father Prior has attended similar events the past two years at nearby Divine Mercy Parish in Central Square. This year, the parishes joined together in offering the event.

Sunday, at Divine Mercy, the Awakening drew several hundred to the tent behind the new, bigger church being finished on U.S. Route 11. In Central Square, some families who hadn’t been particularly active in the parish stepped up to help plan this year’s event, said Father Christopher J. Celentano. “You can just kind of hear the buzz,” he said.

“Anytime you have people coming together, breaking bread and sharing the day together, you can never go wrong with that,” he said.

Bringing people together and reigniting their faith can inspire them to become a part of parish renewal, Hallman said. Many people don’t think of a tent revival as a Catholic expression of faith, but it can be, she said.

“We’re changing our personal language,” she said. “Yes, we can read the Bible. We’re developing a plan to engage people more in the parish. And I’ll tell you right now, it’s going to be through a relationship with Christ.”