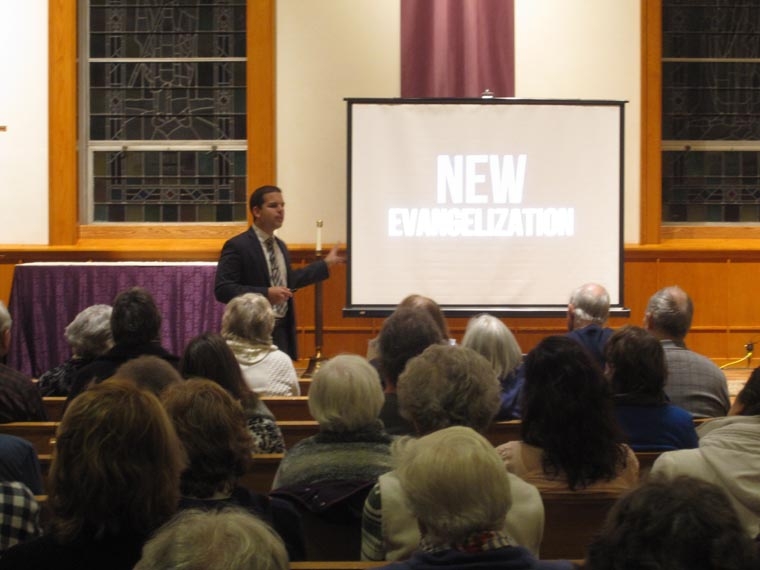 What does it take to effectively share the Good News today? Brandon Vogt has it narrowed down to three essentials.

Vogt shared those three pillars during a visit to St. James Church in Syracuse Feb. 24, where he offered a talk about “the New Evangelist.”

Raised Protestant, Vogt converted to Catholicism in 2008. Now, at 28, the husband and father is also the author of four books, a blogger, a speaker and content director for Father Robert Barron’s Word on Fire Catholic Ministries. Father John Manno, pastor of St. James, and members of the parish community invited Vogt to speak after reading his Saints and Social Justice, a book Father Manno called “transformative.”

Here are some of the highlights from Vogt’s talk:

Evangelizing or evangelism, spreading the Good News, is often thought to be a “Protestant thing,” Vogt told the crowd at St. James, but “evangelization is a deeply Catholic thing.” In fact, “it’s the heart of the thing. Evangelization is not just one thing among many that the Church does, it’s the main thing, it’s her main mission, it’s the reason she exists,” he said.
But what is “the new evangelization”? Vogt provided a brief tutorial, based on St. John Paul II’s encyclical Redemptoris Missio. The new evangelization doesn’t aim to reach those already in the pews or those who have never heard of Jesus Christ and the Church, but rather aims to reach those who have had some experience of God but who have drifted away, he said. Put another way, it’s “re-evangelization.”
“So, how do we effectively tell our Catholic story in ways that draw people back to the Church they’ve drifted away from?” Vogt asked. He suggested every effective New Evangelist has to master three traits:
1. Clarity. “You can’t share what you don’t know,” Vogt said. “If you aren’t clear about what you believe, you’ll never be able to articulate it to others.” Where to get that necessary clarity? The bible and the Catechism of the Catholic Church. With knowledge from those sources, you’ll be equipped to clear up misconceptions about what Catholics believe and get to the root of issues that may be keeping people from the Church, he said.
2. Calm. There’s a saying about never discussing religion or politics in polite company. That’s because discussions (and disagreements) about deeply held beliefs and opinions can be emotionally charged and visceral. But, in these situations, “we need to shed light, not heat,” Vogt said. “Light draws people in and illuminates the good. Heat burns people.” It’s better to calmly shed the light of the Catholic faith instead of burning people, he added, reminding the crowd that people will often remember how you made them feel, not what you taught them. Vogt suggested a strategy used by the organization Catholic Voices: affirm the positive intention. When someone disagrees with you, find the positive intention underlying their rejection of your view, respect it and use it as a bridge to the Catholic faith, Vogt explained.
3. Joy. St. Teresa of Avila once said “a sad saint is a bad saint,” and that holds true for all Catholics, Vogt said. Against a picture of a grinning Pope Francis, Vogt asked, “How could you not gravitate toward the bubbling, effervescent joy that Pope Francis exudes?” Joy is the ultimate apologetic for Catholicism, the ultimate thing that draws people to the faith, Vogt added, “so if we want to draw people to the Lord, we need to exude the same joy that God Himself is.” One really simple way to do that? Smile profusely, Vogt said.
“Many people think that they’ve heard the Catholic story, many people have had some experience of God or Church, but have drifted away because they haven’t found it compelling,” Vogt told those gathered in closing. “It’s time for all of us, as John Paul said and encouraged, to become New Evangelists; to master the art of clarity, calm and joy; to share the real Catholic story in exciting and compelling ways.”

For more of Vogt’s insights on the new evangelization, new media, social justice and more, visit his website at
www.brandonvogt.com.