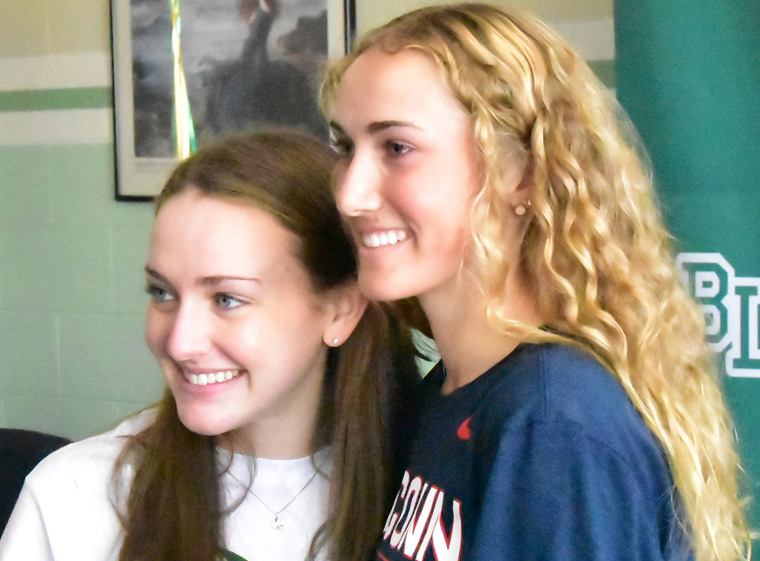 It was a double-sheet-cake day for a couple of Bishop Ludden seniors who awe their high school coaches and excite their future college coaches. Even the Dean of Students is impressed.

“I’ll be honest with ya,” Ludden Dean of Students Gallagher Driscoll said, “I have never gotten one referral on either of ’em in six years.

“So, you’ve done everything the right way,” Driscoll, who doubles as the Director of Athletics, told the duo. “Continue to do it. Enjoy these moments. We have a UConn cake and a Le Moyne cake over there for everybody to celebrate.”

At a Ludden library celebration attended by plenty of fans of both student-athletes, Sarah Boyea signed her Institutional Letter of Intent to play soccer for the Le Moyne College Dolphins in Syracuse.

Kaitlyn Kibling signed her National Letter of Intent to play softball for the University of Connecticut Huskies in Storrs.

Here, alphabetically, are their stories:

Asked for the biggest highlight of her career as Ludden’s soccer goalie, she cited a victory this past season over Tully, a team her squad had not beaten in her time as a Lady Knight. Also, she got to play Ludden soccer for two years with her older sister Olivia, who played sweeper—the last line of defense before the ball got to Sarah.

What is the thrill of being a goalie?

“It’s just to know that your team is counting on you to make a big save and then you make it—it’s a great feeling,” Sarah said. She added: “There’s always so much that I can get better at. So being able to learn constantly is really what I love about it.”

Asked if making a save is a process of divining what the attacker is thinking, she said: “It all depends on where the shot comes from. If it comes from real close, you kind of have to do a little bit of guesswork,” but if it comes from far out you must “decide where you’re gonna dive.”

Pat Cassalia, the Ludden girls varsity soccer coach, said of Sarah: “This is the best goalie I’ve ever, ever coached, and also one of the best persons I’ve ever coached. She’s totally committed to the sport, to her team and to her school.”

Citing a non-sports highlight from her Ludden years, Sarah said: “I love the environment here. I have so many friends and just having the small-school environment has really been good for me, and I’ve been part of student government since seventh grade. This year I’m Student Council president, and so that’s just been a great thing for me, being able to be part of the community like that. … I have a lot of people who are on Student Council with me and they help me a lot, and it’s a team effort.”

Her soccer team made it to the sectional semifinals in Class D this past season—“I was really proud of my team.”

Sarah plans to study biology at Le Moyne—“I want to go to medical school and to be a pediatrician.” Asked why, she explained that she loves to babysit “and I’ve always loved being around kids, so I think that’s just the right path for me.”

Le Moyne Head Women’s Soccer Coach Carrie Bonus emailed: “We are excited to have Sarah joining the Le Moyne women’s soccer team in the fall of 2022. It is always exciting when you can find local talent to add to the squad. Sarah will add a level of athleticism and hard work to the roster. She is very confident with her feet, which is very important at this level. We look forward to getting to know her and her family better in the coming weeks and months.”

Kaitlyn was the statewide Class D softball player of the year this past spring.

“I just worked hard and trusted my teammates through everything,” she explained. She can play either infield or outfield: “My arm is pretty good, so I can do a lot of different things, and I’m willing to play anywhere.”

The highlight of her softball career so far at Ludden has been winning the sectional championship this past spring. She throws righty but because she is fast, one of her coaches switched her to lefthanded hitting, which allows her to slap-hit—run and hit at the same time. She can also bunt and hit for power: “Against Sackets Harbor I hit two home runs in our opening round of sectionals.”

Ludden Principal Michael McAuliff read a letter sent to Kaitlyn by Tom Royal, Ludden’s girls softball coach: “I always refer to the fact that you are beyond the best softball player I have ever coached. You are one of the best athletes I have had the pleasure of coaching. Your leadership and drive are some of the big reasons we were crowned Section III champions this year.

“It seems like just yesterday when you were the seventh-grader playing varsity softball. You have matured into an outstanding student-athlete. I know how hard you have worked for this achievement, and it has been great watching your success. The University of Connecticut is getting a first-class ballplayer, along with an outstanding person. You have always taken your studies and athletics very seriously. Remember to always follow your heart and believe that you can make your dreams come true.”

Kaitlyn is pretty sure that she wants to study psychology. She picked UConn because “there’s a competitive culture. … I love the campus, it’s so beautiful and the academics there are very good. … When I went there, it just felt like home.”

She picked Spirit Week as a non-sports highlight at Ludden—“getting the school community together and having all the grades work together.”

“We are so excited to have Kaitlyn as a part of our Husky Family. She will play outfield at UConn and we are looking forward to coaching her athleticism both offensively and defensively. Her determination will drive her success as a college athlete and we are expecting Kaitlyn to bring passion, coachability and her high-level game sense to our program.

“Ever since Kaitlyn came to our camp in September of 2019, I knew she was meant to be a Husky. Her energy and spark while playing the game she loves was impossible not to notice and you could see the fire in her eyes. Kaitlyn is a dynamic player to watch and I can’t wait to coach and watch her develop in her pursuit of helping this program win a Big East championship and beyond.”

Sarah and Kaitlyn are two of the four team captains and play in the starting five for Ludden Girls Basketball Coach Carm Petrera, who said:

“They both are extremely talented athletes. … It just attests to the hard work that they both put into their craft. … They’re going to two great programs and it’ll be nice that Sarah’s closer to home so I can get to watch her and I’m sure we’ll make a trip out to UConn to see Kaitlyn play. Oh yeah, we’re a family here.”