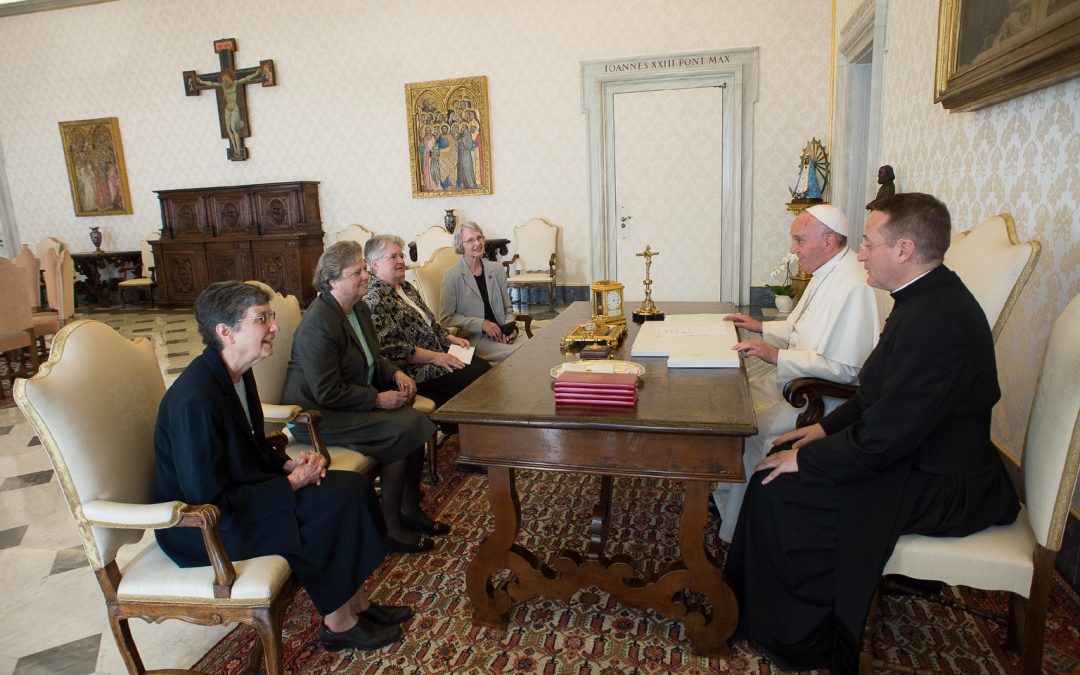 VATICAN CITY (CNS) — The Vatican approved new statutes and bylaws for the U.S. Leadership Conference of Women Religious, ending a seven-year process of investigating the group and engaging in dialogue with its officers to ensure greater harmony with church teaching.

Conference officers met April 16 with Pope Francis, the same day the Vatican announced the conclusion of the process, which included oversight for three years by a committee of three bishops.

LCWR has more than 1,500 members, who represent more than 80 percent of the 57,000 women religious in the United States.

Four LCWR officers spent 50 minutes with Pope Francis, discussing his apostolic exhortation, “The Joy of the Gospel,” which, they said, “has so deeply impacted our lives as women religious and our mission in the world. Our conversation allowed us to personally thank Pope Francis for providing leadership and a vision that has captivated our hearts and emboldened us as in our own mission and service to the church.”

“From the beginning, our extensive conversations were marked by a spirit of prayer, love for the church, mutual respect and cooperation,” said a joint statement of the LCWR officers and the U.S. bishops appointed by the Congregation for the Doctrine of the Faith to oversee the conference’s reform.

LCWR promised that materials it publishes first will be reviewed to “ensure theological accuracy and help avoid statements that are ambiguous with regard to church doctrine or could be read as contrary to it.” In addition, programs sponsored by the conference and speakers chosen for its events will be expected to reflect church teaching, the statement said.

In addition, it said, the doctrinal congregation, the bishops and LCWR officers had “clarifying and fruitful” conversations about “the importance of the celebration of the Eucharist; the place of the Liturgy of the Hours in religious communities; the centrality of a communal process of contemplative prayer practiced at LCWR assemblies and other gatherings; the relationship between LCWR and other organizations; and the essential understanding of LCWR as an instrument of ecclesial communion.”

The new statutes, the statement said, sought “greater clarity in expressing the mission and responsibilities” of the conference as a body “under the ultimate direction of the Apostolic See” and as a group “centered on Jesus Christ and faithful to the teachings of the church.”

After asking Archbishop Leonard P. Blair of Hartford, Conn., in 2008 to carry out the doctrinal assessment of LCWR, in April 2012 the Congregation for the Doctrine of the Faith called for the revision of LCWR’s statutes and bylaws. The reform, the Vatican said, was meant to ensure the conference’s fidelity to Catholic teaching in areas including abortion, euthanasia, women’s ordination and homosexuality. The organization’s canonical status is granted by the Vatican.

The assessment said, “Addresses given during LCWR annual assemblies manifest problematic statements and serious theological, even doctrinal errors.” LCWR members and even officers had been known to protest Vatican decisions, including those “regarding the question of women’s ordination and of a correct pastoral approach to ministry to homosexual persons.” And, it said, there was “a prevalence of certain radical feminist themes incompatible with the Catholic faith in some of the programs and presentations sponsored by the LCWR.”

Releasing the assessment, the Vatican had appointed Archbishop J. Peter Sartain of Seattle to provide “review, guidance and approval, where necessary, of the work” of the conference and its reform efforts. Archbishop Blair and Bishop Thomas J. Paprocki of Springfield, Illinois, were named to assist him.

The process of arriving at new statutes and bylaws was not always smooth.

Meeting conference officers last year, Cardinal Gerhard Muller, prefect of the doctrinal congregation, said, “We are glad to see that work continue (on the statutes and bylaws) and remain particularly interested that these foundational documents reflect more explicitly the mission of a conference of major superiors as something centered on Jesus Christ and grounded in the church’s teaching about consecrated life.”

The cardinal also said the doctrinal assessment was accurate and the reforms were necessary to ensure that the LCWR remain solidly in harmony with the teaching of the church.

Responding to Cardinal Muller’s remarks in 2014, the LCWR said it was “saddened to learn that impressions of the organization in the past decades have become institutionalized in the Vatican, and these institutionalized perceptions have led to judgments and ultimately to the doctrinal assessment.”

“We do not recognize ourselves in the doctrinal assessment of the conference and realize that, despite that fact, our attempts to clarify misperceptions have led to deeper misunderstandings,” the officers said.

As the Vatican announced the conclusion of the process, it released a statement from Cardinal Muller saying his office was “confident that LCWR has made clear its mission to support its member institutes by fostering a vision of religious life that is centered on the person of Jesus Christ and is rooted in the tradition of the church.”

Such a vision, he said, “makes religious women and men radical witnesses to the Gospel, and, therefore, is essential for the flourishing of religious life in the church.”

Sister Sharon Holland, LCWR president and vice president of the Servants of the Immaculate Heart of Mary, was unable to attend the meeting at the Vatican April 16. However, the Vatican released a statement from her expressing pleasure that the process had reached a successful conclusion.

The process involved “long and challenging exchanges” that were “conducted always in a spirit of prayer and mutual respect,” she said. The process brought the sisters, the bishops and Vatican officials “to deeper understandings of one another’s experiences, roles, responsibilities and hopes for the church and the people it serves. We learned that what we hold in common is much greater than any of our differences.”

Archbishop Sartain said, “Our work together was undertaken in an atmosphere of love for the church and profound respect for the critical place of religious life in the United States, and the very fact of such substantive dialogue between bishops and religious women has been mutually beneficial and a blessing from the Lord.”