‘We know the need is great’ 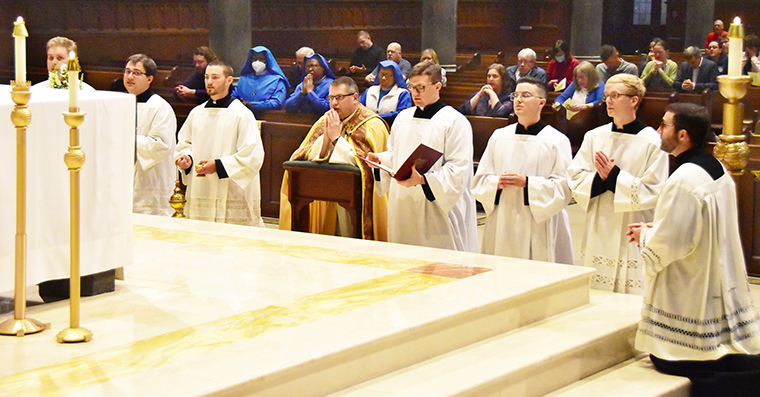 With no priestly ordinations this year, Holy Hour for Vocations trusts in the Lord 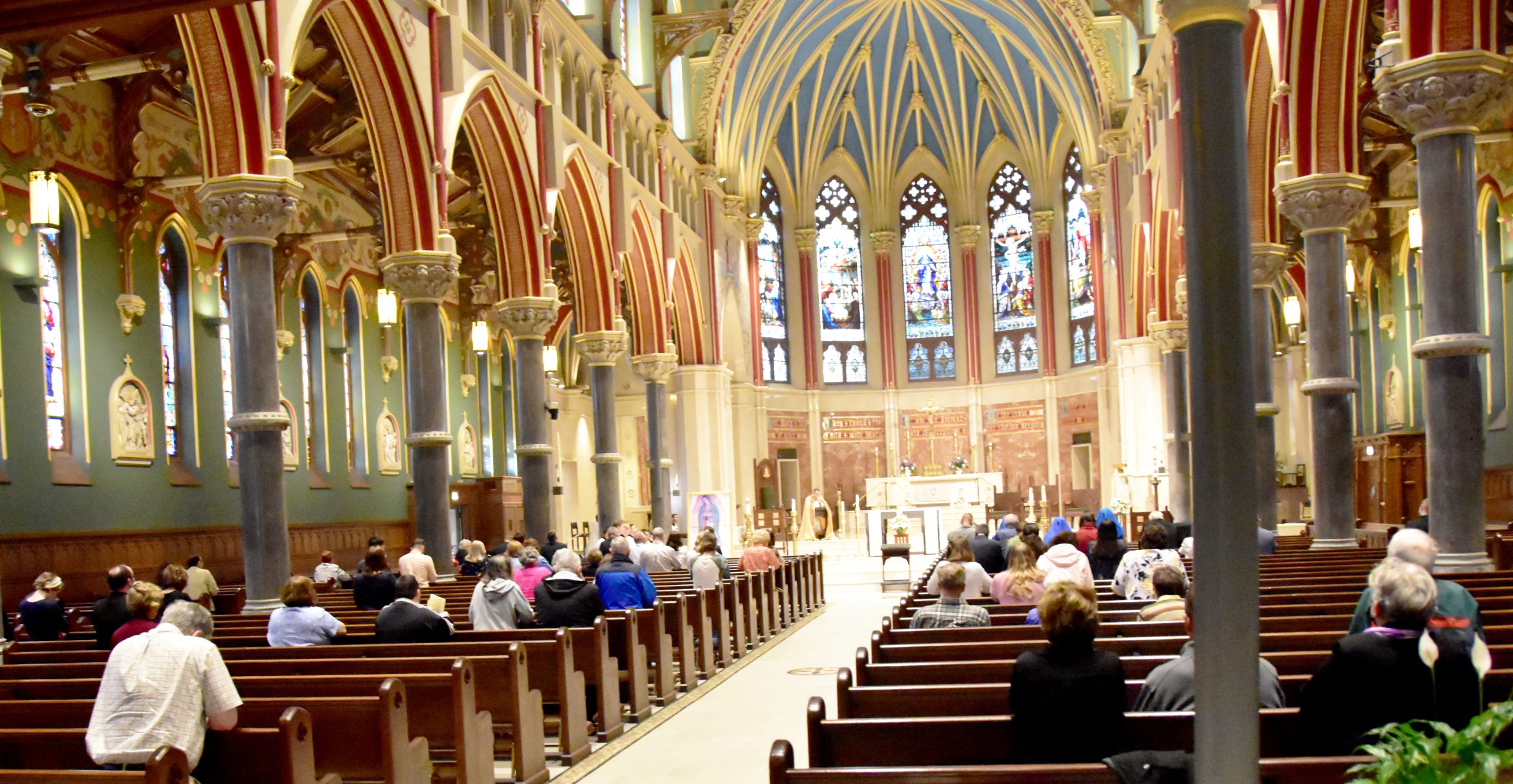 The congregation prayed “that teens and young people will overcome their fear of unworthiness and truly consider a vocation to priesthood or consecrated life.” The response was “Lord, we trust in you.”

One is three years from his goal; the other has been at it for almost 70 years.

Seminarian Joseph Ryan and Sister Colette Walter were among the dozens of attendees on Saturday, June 4, at the Holy Hour for Vocations at the Cathedral of the Immaculate Conception in Syracuse.

On the first Saturday in June, the diocese typically has a priestly ordination, but Ryan noted that no ordinand was lying prostrate, symbolizing selflessness, in the sanctuary. But he is on track to make sure that is not the case in 2025.

Asked if he’s happy with his choice, he said: “It’s been amazing; in these last four years I’ve been able to work in high schools, visit people in nursing homes and hospitals, serve at the altar. … I’m so happy I followed this path.”

Sister Colette is a Sister of St. Francis of the Neumann Communities. She has been a teacher and a principal, and now she works at Francis House, which she called a “home for the dying and for those who die with unconditional love and care.”

Her nearly seven decades in ministry, she said, have been “the best experience of my life. I have been happy. It hasn’t always been easy. But God is always with you, so God kind of pulls you through as long as you stay connected with God.” 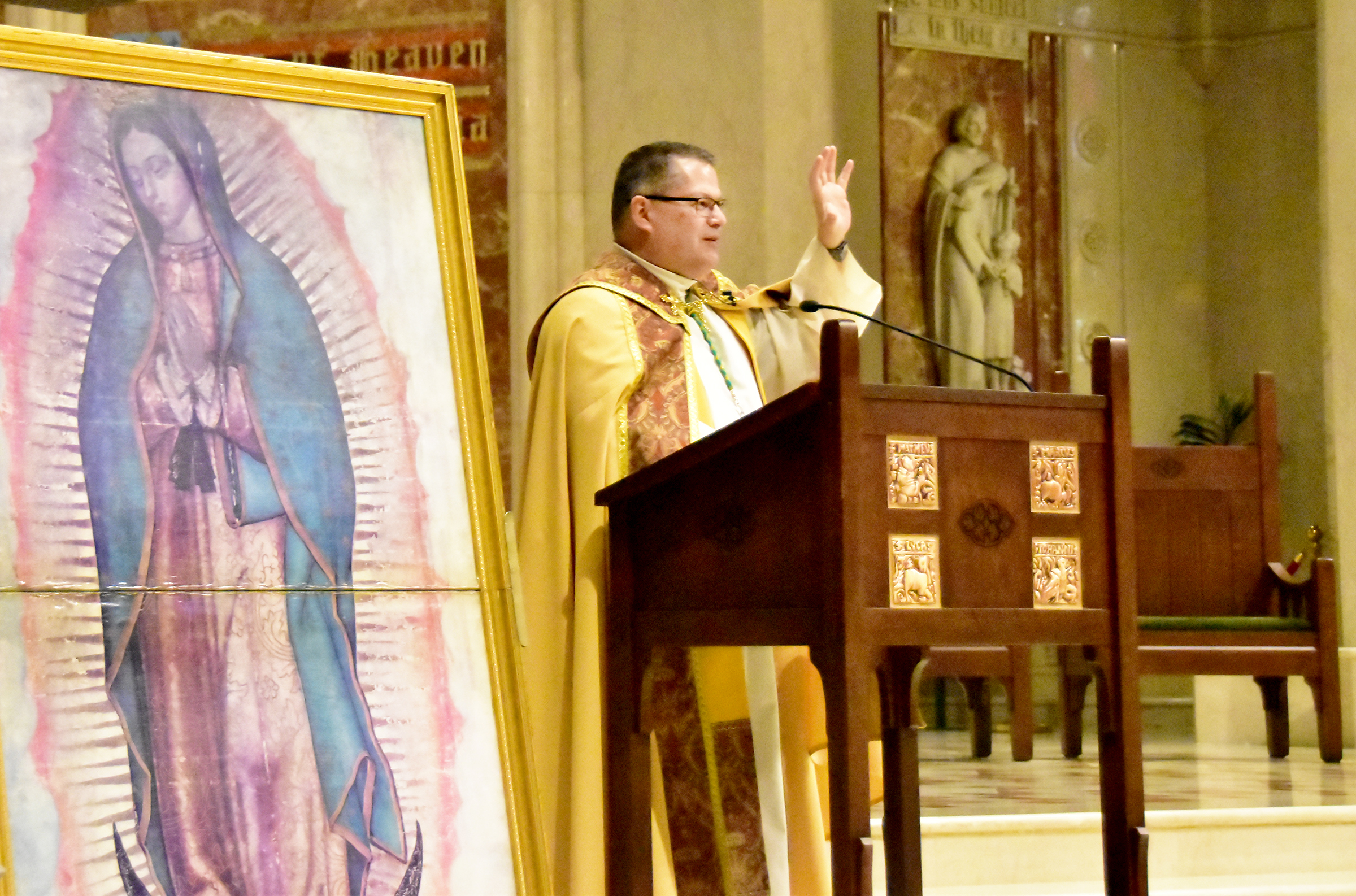 Bishop Douglas J. Lucia delivers the homily next to the Missionary Image of Our Lady of Guadalupe. (Sun photos | Tom Maguire)

The intent of the Holy Hour was to pray for the gift of vocations to the priesthood, to the consecrated life and to all Church ministry. In his YouTube video advancing the Holy Hour, the Bishop says: “We know the need is great, especially every time we look at pastoral assignments of our priests. But we also know that the Lord is very close to us, and that, if anything, the Lord is trying to make all of us recognize our own call — our own call to be a living Gospel for all people to hear.”

Sometimes, Bishop Lucia told the congregation at the Holy Hour, the Lord “leads us in ways beyond our greatest imagining. It’s three years ago this morning, at this hour, that I was introduced to this diocese as the new Bishop. And … I remember standing in that little room next to this Cathedral church wondering, What am I supposed to do? How am I supposed to respond? And yet, what I’ve discovered in the three years I’ve been among you is that it’s really all about our openness to God. It’s all about letting God work through us.”

If people really listen to Jesus, he said, “we’ll have all the vocations we need, in all shapes and forms.”

The Master of Ceremonies for the Holy Hour for Vocations was Father Jason C. Hage, a pastor and the director of the diocesan Office of Vocation Promotion. Asked if there is a sense of frustration that there is no priestly ordination this year, he said: “I wouldn’t use the word ‘frustration.’ I would say it’s … a gut check for our diocese, to say what are we doing, and how can we be doing more to call forth vocations in our diocese.”

Seminarians Jonathan Hoole, Joseph Ryan, Benjamin Schrantz, Gianni Verginio and Douglas Villanella joined Bishop Lucia and Father Hage in the sanctuary for the Holy Hour. Asked how the seminarians got into it, Father Hage said:

“Usually it’s because somebody asked them to consider it. And so, maybe their pastor encouraged them to think about priesthood, or their religious education director or their youth minister or their campus minister at college — usually someone close to them in their life who’s been walking with them on their journey of faith. … Everybody that’s come to me has always been encouraged by others in their faith communities to really think about it and consider it.” 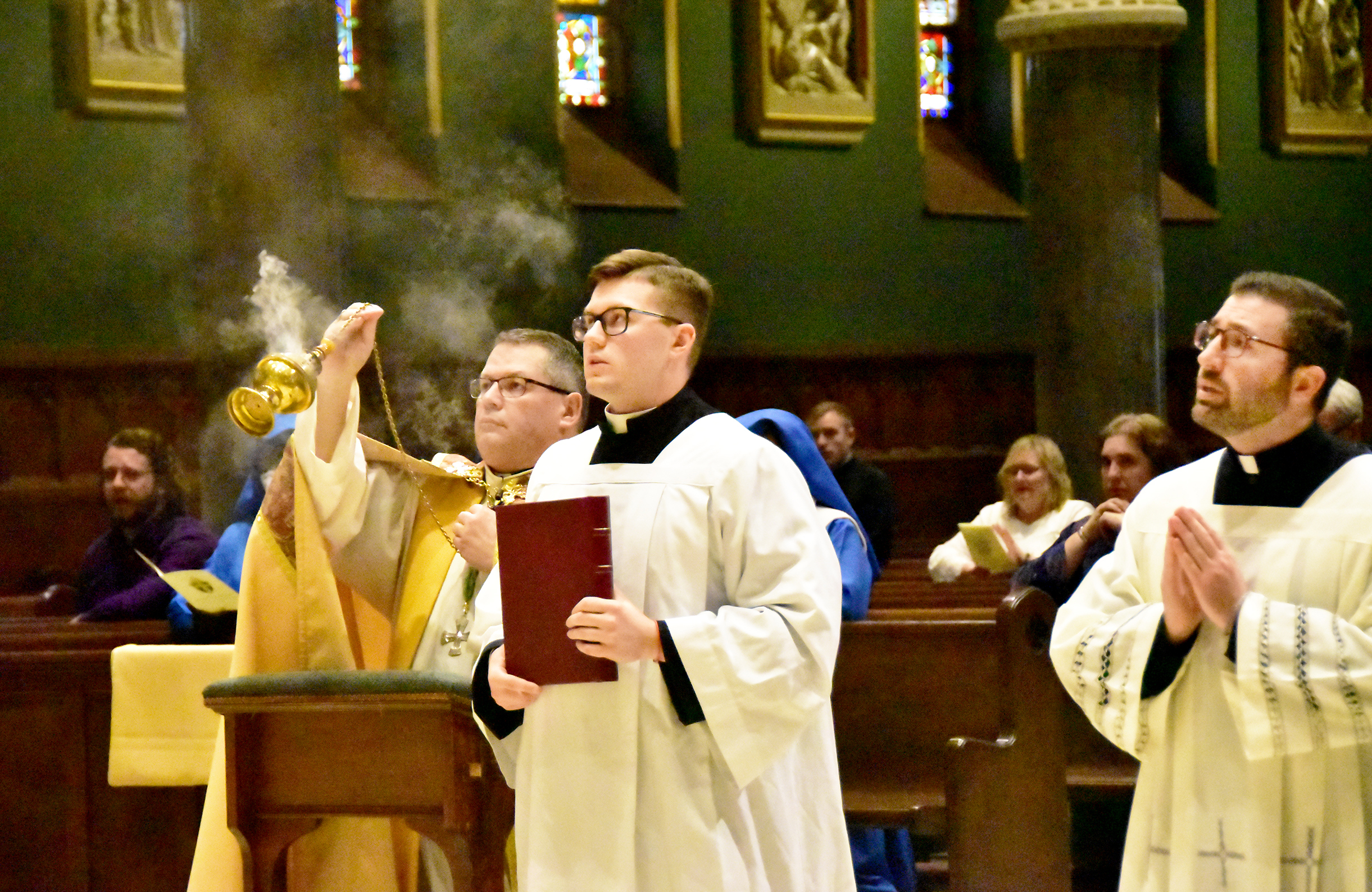 Don’t be shy, make the ask

Father Hage believes that one should know “how to make the ask as a lay person in your parish.”

In a video he made in support of the diocesan Called By Name effort, Father John D. Manno, vicar for priests and pastor of Holy Family Church in Fairmount, remembers that his pastor had put index cards in the pews and asked parishioners to write down the name of somebody they thought would make a good priest.

The pastor collected the cards after a couple of weekends. “The third weekend he came in,” Father Manno says, “I was getting ready for Mass, I was an altar server, and he took this stack of cards, it was a thick stack of cards, and he just put them on the counter in front of me and he said, ‘Kid, all these cards have your name on it.’ And he said, ‘There’s a lot of people here who think you would make a good priest.’

“And so when I saw that stack of cards and just started thumbing through it, I thought, Wow, there are a lot of people here who think I would make a good priest.

“And it really had an impact on me. It wasn’t just coming from my pastor. … The fascinating thing is, there were a multitude of people in that church who saw something in me that maybe I didn’t see that gave me a little more confidence to start thinking and praying about: Is this actually what God is calling me to?”

“I would say that people who are most at peace are people who are connected with God,” said Sister Colette, who worked as a teacher and a principal before her current ministry at Francis House. “If they have the presence of God in their life and they recognize the goodness of God, ’cause that’s who God is for me — God is all good.

‘A God of surprises’

“They say that God is a God of surprises sometimes,” said seminarian Ryan, a 2017 graduate of Seton Catholic Central Jr./Sr. High School in Binghamton. “And as much as we might try to craft a plan for our whole life, the Lord already has a plan, as we hear in the Bible. … As the Bishop was saying in his homily today, once we start answering the Lord and just responding to him and acknowledging his call, he’ll take us on whatever path he has in mind.”

Before we start thinking about a vocation to the priesthood, religious life, consecrated life or diaconate, Father Hage said, “we have to start with Where am I at with Jesus, and am I listening to God in my life.”

Then comes the Men in Black Softball Game the last Sunday in July. The priests and seminarians take on a North Syracuse parish, St. Rose of Lima.

Also, young people who are named in the Called By Name program will be invited to join Bishop Lucia on the first Wednesday in August at his vocations picnic at Christ the King Retreat House in Syracuse. Chris and Linda Padgett, national speakers who live locally, will be speaking that day.

One young person, seminarian Ryan, just finished his second year of Theology at St. Mary’s Seminary & University in Baltimore; he will be going into his pastoral year this fall living with Father Joseph M. O’Connor at St. Elizabeth Ann Seton in Baldwinsville.

Ryan had originally wanted to be a lawyer and maybe get into politics someday. But after hearing an archbishop preach about vocations in general, he started to pray more and go to Mass more often. He was advised to give college seminary a try, so he spent two years at St. John’s in New York City before entering St. Mary’s in Baltimore.

“One of the Scripture readings that was really key in my discernment,” Ryan said, “was ‘What profit a man if he gain the whole world and lose his soul?’”