‘We’re super psyched about this’ 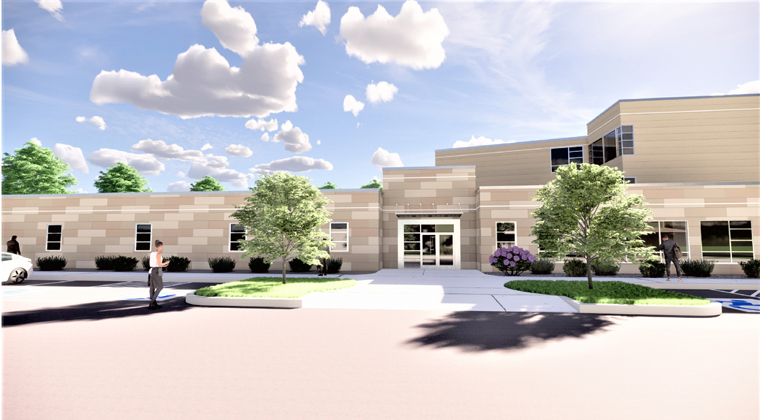 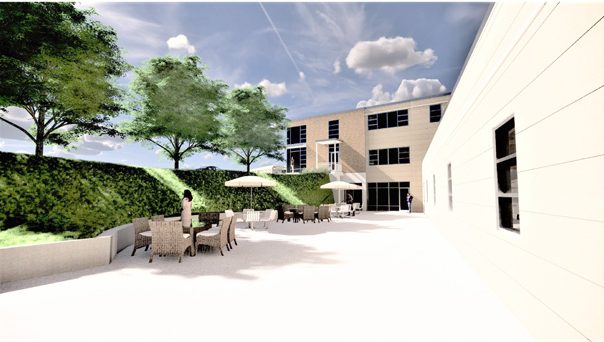 This rendering of the patio shows Catholic Charities’ intention to “create a comfortable space for our guests to be outside,” says Michael F. Melara, Executive Director of Catholic Charities of Onondaga County. (Renderings courtesy of Holmes, King, Kallquist &
Associates, Architects)

Catholic Charities to use three-acre parcel for $12.85M project to help homeless

A former commercial building in Syracuse will take on a steadfastly welcoming air.

Melara plans to turn the three-acre parcel at 1801 Erie Blvd. East into his agency’s approximately $12.85M Housing Services Center for men who are homeless. “We’re super psyched about this,” he said.

Catholic Charities, he said, tends to concentrate on homeless men who struggle with mental health or substance abuse or some combination of those issues—“they really represent the most vulnerable members of our community.” 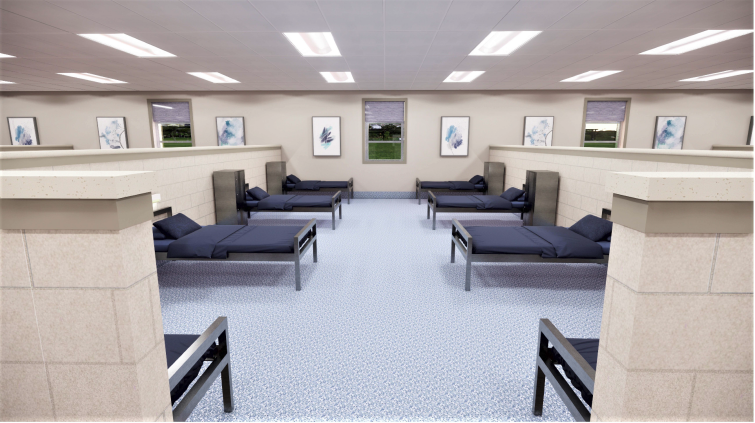 The dormitory is named for retired Monsignor J. Robert Yeazel. “We like the idea of our guests who after a long day … come back to the dormitory and rest,” says Michael F. Melara, Executive Director of Catholic Charities of Onondaga County.

Planned for completion this fall about three miles from downtown is the Catholic Charities Housing Services Center, an 80-bed shelter licensed by the state. Included will be a dormitory named for retired Msgr. J. Robert Yeazel, “given all that Msgr. Yeazel has done for the diocese for folks that struggle, for the poor and particularly for the homeless,” Melara said.

“I am very honored to have this ‘dormitory of welcome’ named after me,” Msgr. Yeazel said in an email. “But the real honor goes to Catholic Charities, its staff, volunteers and benefactors.
“Catholic Charities has done amazing things for those most in need throughout its existence and now Mike Melara and his team are providing a new and vibrant place of rest and renewal for our friends.
“We all know what it is like to move into a new home—it is a chance to start over, it has a feeling of comfort and security, and I pray that it will be so for all who accept the hospitality of this new home.
“In these times when the world is so divided, we need others’ presence like never before. With that presence of others we can hopefully acquire a new feeling of belonging, a recognition that we are loved and lovable. In this project, Catholic Charities’ mission has truly met the moment.

“Blessings to all who have made this building truly a ‘home away from home.’”

The shelter will include the Msgr. Yeazel Dormitory; a commercial kitchen in which the shelter’s guests can develop their culinary and workforce skills; leisure space; a dining space; and health and mental-health clinics. The adjoining office building is being renovated for 40 professional-staff members. Phase 1—the shelter and the office building—will open this fall.

To the north of the office building will be Phase 2, projected to open toward the end of this year or the beginning of next year: six single-unit apartments for “older homeless men who have spent way too much time on the street, way too much time in the dormitory,” Melara said. These residents, he said, will have “their own apartment with some of the comforts of home,” along with access to all of the services at the shelter.

A patio and a landscaped area will be part of what Melara called the “interesting parcel,” because the offices will be at street level but the dormitory and the apartments will be about eight to 10 feet below street level; that is where most of the construction will be. Lighting and security will also be addressed.

Melara cited excellent financial support: $6M from New York State’s Homeless Housing and Assistance Program; a $3M appropriation in the federal budget, as reported by the office of U.S. Rep. John Katko; $2.85M from Onondaga County; and over $1M from many donors including the Allen Family Foundation.

Some fundraising continues, with the potential for eight or even 10 apartments instead of the planned six if the goals are exceeded, Melara said. That would boost the overall price of the project to about $13.3M. 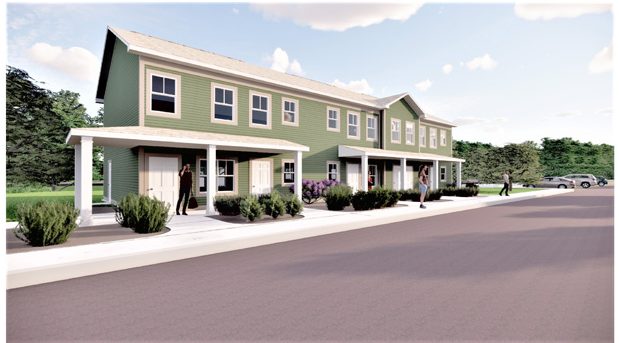 “We’ve slated six apartments,” Catholic Charities of Onondaga County Executive Director Michael F. Melara says, “but we have done so well on our capital campaign” that the number could increase to eight or 10 apartments.

Catholic Charities intends to keep its current men’s shelter open at 1074 S. Clinton St., Melara said, until the new facility is ready. Catholic Charities’ intake center at Cathedral Emergency Services at 264 E. Onondaga St. will transition to a 24/7 operation around the end of April for housing-vulnerable or homeless individuals. Professional staff will greet them, process them and transport them via van to the most appropriate shelter location, such as the Rescue Mission, the Salvation Army or the new Housing Services Center.

“We hope to have a team that we can dispatch to a business owner or here at Cathedral,” Melara said, “that somebody can go and talk to that individual, try to engage them, get them to the intake center and get them the help that they need.”

That does not remove the need for the Rescue Mission, he said. “In fact, we are bracing ourselves, now that the eviction moratorium has ended and eviction court is in full swing, we are anticipating more people getting evicted, more people becoming homeless. We expect that will grow at full capacity. … Yeah, it’s tricky out there right now.” If families come to the intake center, they will be processed like anyone else, he said.

“Serving the homeless represents the full expression of our mission at Catholic Charities,” Melara said. “It’s part of our DNA, it’s a core service. And it is one of the places where we see the face of God in the people that we serve.”