When CBA’s Cariseo coaches, ‘they know where they stand’ 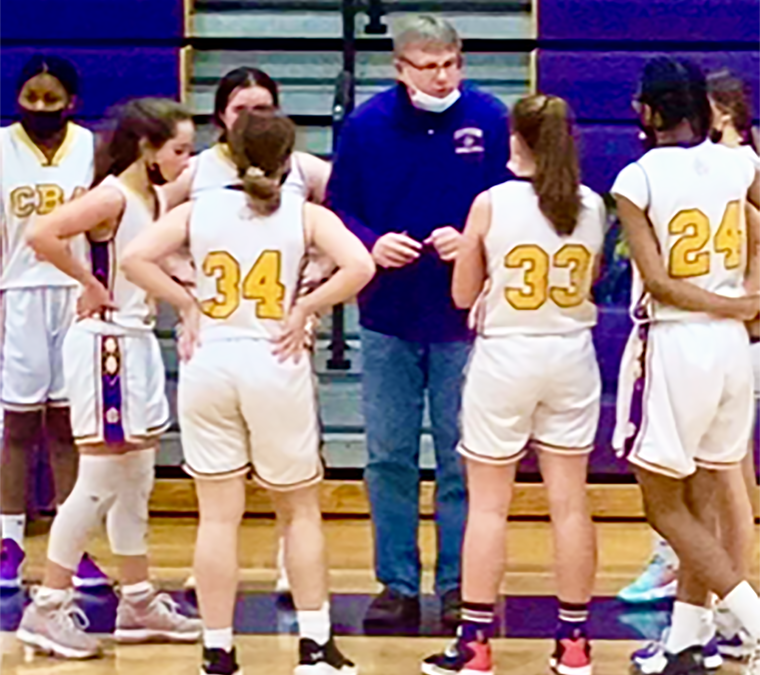 New girls varsity hoops coach has loved the game going all the way back to his St. Daniel’s days

The prelude to sports night was pointed — aimed at No. 7.

Mike Cariseo, then probably 11 years old, invited his friends, all Yankees fans, to come meet the great Yankee Mickey Mantle in his living room. Cariseo’s dad, Ray, worked for General Electric Syracuse for 44 years and ran sports nights called the GE Foreman’s Associate Dinner. The elder Cariseo would pick up the guest speakers at the airport and bring them back to his Jamesville home.

There was Mantle, in the Cariseo home. “I shook his hand and I said, ‘I’m a Red Sox fan,’” Mike recalled. He doesn’t remember how No. 7 responded but he “probably just chuckled. … I was a kid. A little kid” in the 1970s.

“I overcommunicate, really. Because I believe I probably had coaches that never communicated, which annoyed me in my life. … You gotta earn their respect and trust or you’ll never be successful as a coach.”

“We are excited to have Mike Cariseo take over our girls’ basketball program,” CBA Director of Athletics Buddy Wleklinski said in an email. “We feel his experience with, and passion for, our program and its players makes him a great person to take over for John Niland, who retired at the end of the 2021-2022 season. We are confident that with his leadership, our program will continue its tradition of success and be a source of pride to our players and the entire CBA Community.”

Niland, a 1974 CBA grad, was CBA’s varsity girls coach for 18 years. Those teams won more than 260 games. “Those victories earned a winning percentage of over 70% and established him as the winningest coach in our program’s history,” AD Wleklinski wrote. “They also led to 11 league and 4 sectional championships, the most recent being in 2020.”

In the last two years Niland and Cariseo talked early in the morning almost every day — “he’s just a basketball junkie behind the scenes and so am I,” Cariseo said.

Last year Cariseo’s JV team was 18-1. “And they were eighth graders, they were real young,” he said. Their motto was “They don’t score, we win.” Cariseo has said that to every lacrosse and basketball team he has ever coached. “It’s easier to teach defense than it is offense,” he explained.

All told he has coached basketball, baseball and lacrosse for 35 years — basketball is his love (“something about it”) since he was 6 and living in Lyncourt; baseball is probably second; then lacrosse. He played hoops as a youth at St. Daniel’s in Lyncourt and in driveways on Delmar Place, then at Jamesville Elementary and at Jamesville-DeWitt.

He models himself after the show of excellence of his freshman coach at J-D, Joe Mueller — “I still see him in town, and I’ll never forget him. … He earned our respect, he earned our trust first, and then he demanded excellence and demanded execution and he demanded focus, but he loved his players.

“And we knew that, so we played for him. And I’m still friends with all my teammates from back then [they were undefeated that freshman year] and we’d all say the same thing.”

Cariseo and his wife of 35 years, Claire, live in Jamesville, on the other side of the woods from Mike’s parents, Ray and Eileen. In 2001 Mike started the girls program for the Jamesville-DeWitt Youth Athletic Association; he ran the full JDYAA program from 2001 to 2013. He said the JDYAA team he started when the girls were in the first grade (including his daughter Kate) was the class that eventually won a sectional basketball title for Coach Rob Siechen at J-D; it was the first such title for the girls at J-D since Coach Rick Ellison’s team accomplished it decades earlier.

The 6-1 Kate was a three-sport captain (basketball, lacrosse, swimming) at J-D and was a four-year player/captain for SUNY Oneonta basketball. Mike’s other daughter, Liz, was a J-D swimmer and his son, Mick, played baseball and basketball for J-D.

Cariseo also owned and coached an Amateur Athletic Union baseball business, playing in the Northeast and Midwest and helping kids 15-18 who aspired to play in college.

He’s a coach at work too. An electrical-design engineer for most of his career, he works in  business development, alliance partnership and software development for Toyota Material Handling/Raymond Corp., where he has developed young people from technical schools and watched them succeed. “I get invited to their weddings 10 years later. … You find smart, high-aptitude kids. They can do anything,” he said.

Likewise, he hopes for high-IQ basketball kids in his basketball camp. “Hopefully one’s a point guard,” he said. “We actually have two right now at CBA, young, but very high-aptitude point guards coming up.”

Cariseo also has his own consulting company on the side with his brothers. “Yeah, I’m busy, busy,” he said, “but I’m gonna be a basketball coach.” It’s even in his Toyota contract that they know he’s a coach, “so that’s part of the deal.”

Now is the time for low-key summer-league hoops; the varsity season is different. “I can’t wait to go up against some of these coaches that I know,” he said in a bubbly way. For example, Keith Cieplicki, of J-D, coached Cariseo’s daughter. And it would be fun to play  Siechen’s squad “if I ever get lucky enough to play C-NS.” Siechen won a lot at J-D and has started out impressively in his fairly new job at Cicero-North Syracuse.

Cariseo was in demand for media interviews after the announcement of his promotion at CBA; he would also make a knowledgeable sports-night speaker, just as Mickey Mantle was. And then there is TV hoops broadcaster “Dickie V,” Dick Vitale, who was invited to the GE sports night multiple times because of his friendship with Cariseo’s dad — “he loved Syracuse back then because he loved Grimaldi’s and all that.”

Dickie V is known for his excited outbursts. Asked about his own style, Cariseo answered:

“I’m low-key  in practice. … But in a game I’m pretty intense because you have to coach fast in basketball and get instructions out to them. And they need it. But they love it. Some people would think it’s intense; they love every second of it, these girls at CBA. And really any of my teams.”

The girls on his team, he said, “know what I think of them. As God’s people, as people. The letters I get from moms and dads after the season that talk about, My daughter now has more confidence in herself, not on the basketball court, off the court, that’s why I do this. That’s the 100 percent why I do it. I love basketball, but, I just love kids.”