1-2-3-4, how to play without a flaw: Gaelic Knight Gaughan scores all the goals as Ludden grabs trophy 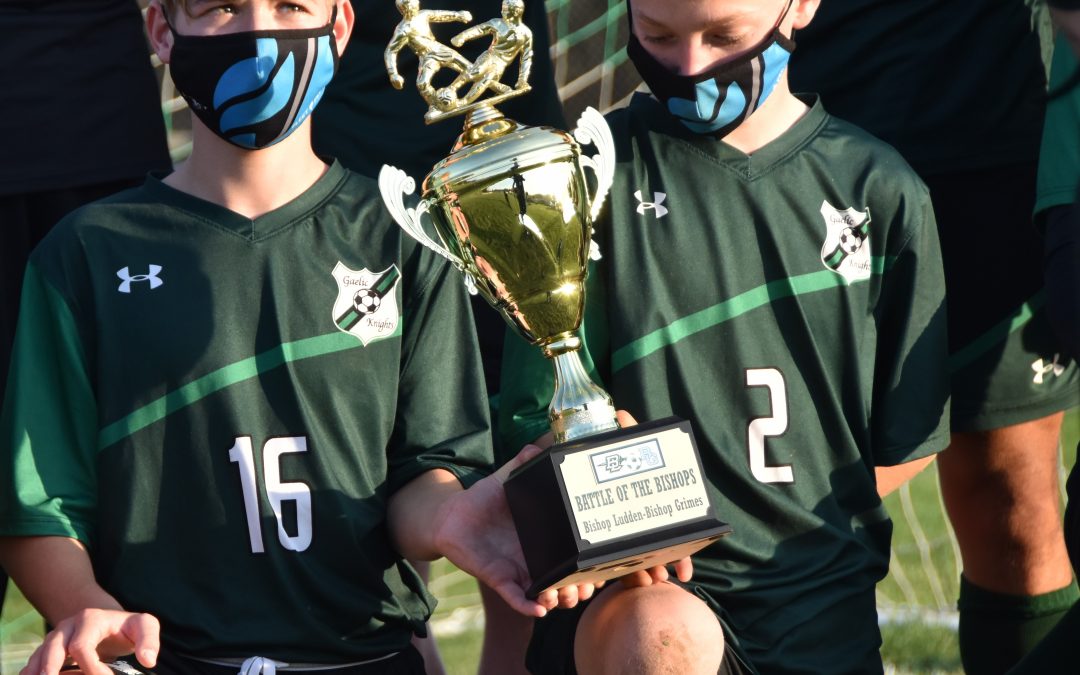 The Battle of the Bishops offered explosive action around the goal, with the Gaelic Knights’ No. 14 the most menacing of all.

Bishop Ludden senior striker Michael Gaughan scored every goal in a 4-0 victory over Bishop Grimes on Nov. 7 at Ludden’s soccer field in Syracuse. “He was dangerous all game,” said Grimes Coach Anthony Epifani.

Equally threatening all game was Ludden’s No. 9, sophomore forward Sam Colella, who assisted on two goals. “I work well with him,” Gaughan said. “We really understand each other.”

“Sam is a very good technical player,” Ludden Coach Ben Cassalia said. “He works a lot during the off-season as well, he plays a lot of soccer, so likes to have the ball at his feet. … He can find people and we can score.” 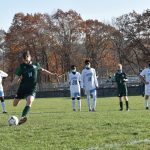 Bishop Ludden striker Michael Gaughan scores on a penalty kick with 35:02 left in the 40-minute first half. Gaughan enjoyed the second four-goal game of his varsity career. He has also recorded two three-goal games for the Gaelic Knights. (Sun photo | Tom Maguire)

Coach Cassalia came up with the idea for the inaugural Battle of the Bishops to take the place of the playoffs that won’t be held this year because of the coronavirus pandemic. The victory means that Ludden will keep the Battle of the Bishops Trophy for at least a year; the trophy game will be played annually by the two teams, which have played each other in the past in non-trophy contests.

“We’re happy just to be out on the field,” Coach Cassalia said, “but once they start playing and those competitive juices kick in they want to win the game, so it’s a little bit of both.”

“I know the masks are annoying,” Cobras Coach Epifani said, “but it’s the opportunity to get out on the field and have some fun, kind of have some normalcy again.”

On a sunny 72-degree day with light west-southwest wind, Ludden Director of Athletics Gallagher Driscoll was among the spectators.

“Almost an extended beautiful fall — we’re in November and it feels like we’re in August,” he said. “It’s great.”

Since there are no league or sectional playoffs this season, the Ludden guys figured, “Why don’t we play for something,” and they came up with the Battle of the Bishops, AD Driscoll said.

Making the battle tougher for Grimes was having to play a man down for about 30 minutes of the second half — one of the Cobras’ defenders drew a second yellow card and had to leave the game. “Happens, you know?” Coach Epifani said. “They’re just kids.”

About five minutes into the 40-minute first half, Gaughan, one of four captains for the Gaelic Knights, opened the scoring with a penalty kick into the left corner of the goal.

On his second goal about seven minutes later, he took a pass from Colella on the left side and sent a flyer into the right side of the net. Colella “fed me a good cross,” Gaughan said.

Get it to Michael 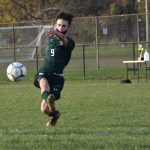 “It’s something we’ve drilled into our game,” Colella said. “So the outside mid drives the end line and then passes back into the striker to tap into the goal. … I believe someone passed it out to me wide, and I took a cut in, touched it by the defender, and just cut it back to Michael.”

With about three minutes left in the first half, Gaughan scored his third goal unassisted against diving Cobras goalkeeper Brad Livesey. “Over on the left wing,” Gaughan recalled, “I was double-teamed and was able to get my way through both defenders and was able to hit it past the goalie.”

Gaughan’s momentum carried him left to right along the length of the goal as he yelled, “Yes!”

Goal No. 4, he said, was similar to his second, a feed from Colella out on the side. Colella beat his defender and put in a perfect cross again, said Gaughan. That left him “right there for a tap-in.”

“I was fed the ball wide,” Colella said, “and I just took a touch past the defender and then slid and just cut it back into Michael again.”

Grimes’ Nick Walsh loudly wondered how that goal could have happened. “He was right, though, no one was marking and the guy had an easy tap-in,” Coach Epifani said.

Goalie Livesey, who made eight saves, is usually the left back but Grimes’ regular starting goalie, Gregory Docos, has a broken pinkie. Docos played forward instead of goalie in the game.

Last season, Gaughan had a four-goal game against LaFayette. His career includes a couple of three-goal games too.

He said he is “just taking advantage of this unique and different opportunity this year. It’s been a challenge, but it’s been a lot of fun.”

If the pandemic had canceled the season, he said, “I’m not sure what I would have done, so this really saved me.”

“He’s been doing it all year, so really I’m not surprised by the output,” Coach Cassalia said of Gaughan. “He just works so hard in the games. He does a lot of work off the ball to help us get possession and he’s just such a good finisher that we’re used to it by now. Really, four goals for us, it’s a great number for him but really for us it’s not unexpected.”

Ludden was trying to fit in as many games as it could before the season ends Nov. 14, scheduling games against schools such as Marcellus and Jordan-Elbridge.

Grimes Coach Epifani graduated from Jamesville-DeWitt in 2013 and then in the fall of that year won a National Junior College Athletic Association Division III national soccer championship with Herkimer College. Then he played soccer for one season at Onondaga Community College and finished his college studies at Le Moyne College.

The Battle of the Bishops was Grimes’ final game of the season, but “the future’s definitely bright,” Coach Epifani said, because he loses only two seniors to graduation.

Among the spectators Saturday was 2020 Grimes grad Byan Mugushu, who is looking forward to his first Utica College soccer season in March. Last season, he said, he scored 40 goals for Grimes, tops in Central New York and No. 2 in the state. He added 14 assists. “Soon as I get the ball on my foot, action,” he said.

“The way I think of Grimes is like a family to me,” he said. “And no matter where I end up in life, I’m always going to stick to that blue and white in me.”

After the game he planned to play some soccer with his great friend Deng Mawien, who also starred for Grimes and now attends Onondaga CC.

“Playing soccer at Ludden,” he said, “was probably the … best memories I have of high school.”