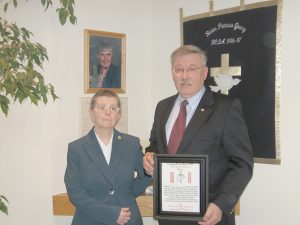 St. Augustine’s Church in Baldwinsville is a better place because of one woman religious and her determination to serve the least of her brothers and sisters. Sister Pat Geary, CSJ, died in 1998 after serving 46 years as a Sister of St. Joseph of Carondelet. She spent the last eight of those years at St. Augustine’s Church in Baldwinsville. Sister Pat brought an awareness of injustice and a love of the marginalized to her parish work and her legacy is still going strong. Sister Pat served in both the Syracuse and Albany Dioceses as an educator, administrator, pastoral associate, director of the Formation for Ministry Program and as provincial superior for her religious order. On March 21, St. Augustine’s Parish awarded its 11th annual Sister Pat Geary Award to Nick Kurpita.

Since 2000, the parish has come together to recognize a parishioner who exemplifies the characteristics that made Sister Pat so remarkable. All parishioners are encouraged to nominate someone from the parish who is active in parish life and/or also active within the greater community. Cathy Garvey, a one-time recipient of the award herself, served on this year’s award committee. She explained that in order to make sure the process is fair, the name of those nominated is actually covered up on the nomination forms before the forms get to the committee.

“We might have an inkling as to who the nominee is just because we might recognize the work they do,” Garvey explained. “We’re looking for someone who gives of themselves without conditions.”

Garvey remembers Sister Pat from when she served at St. Augustine’s.

“She was a person who always stood up for what she believed in,” Garvey said, “especially the rights of the disadvantaged.”

Sister Pat revised the RCIA process at St. Augustine’s and restructured the Pastoral Council by creating standing committees to increase communication among the members. Sister Pat founded the Covenant Weekend program at St. Augustine’s. Each year at Pentecost, the parish displays all the many groups and ministries within the parish community and parishioners can sign up for one year of service to the ministry of their choice. There were approximately 30 options to choose from when she initiated the program, today the parish offers closer to 50 options for service. Sister Pat challenged the parishioners to use their gifts to their fullest potential, according to a biography provided by the parish. Sister Pat made the parish more aware of the need for social justice and compassion for all people.

Garvey said that there was one particular example that is still fresh in her memory regarding Sister Pat’s concern for the underprivileged.

“The local newspaper had done some special articles about homelessness in Syracuse and I remember Sister Pat holding up a picture of a homeless person that was in the newspaper and asking, ‘Do you see the face of God?’ when we looked at it. She said, ‘Jesus didn’t judge and God doesn’t judge so we shouldn’t judge others,’” Garvey said.

Nick Kurpita was also at St. Augustine’s during Sister Pat’s time there. His wife, Cece, was in Sister Pat’s first RCIA class.

“I met Sister Pat in 1990 and she kept my wife’s RCIA class going. It ran one and a half years and they called it the class that never ended,” Kurpita said.

Kurpita said that Sister Pat was someone “you just didn’t say no to.” Kurpita explained that it was Sister Pat who changed the atmosphere at his parish.

“She helped move us forward and helped us form a vision,” he said. “She saw the priest shortage down the road and inspired the lay people to do more.”

Kurpita took his experience with Sister Pat to heart and he became involved in his parish on a deeper level. He has served on the liturgy committee, the pastoral council and he is in charge of the ushers. Kurpita was an advisor with the CYO when his daughters were younger and now organizes the group’s pancake breakfasts. He is sacristan at the 10:15 a.m. Mass on Sundays and went through the Formation for Ministry Program approximately five years ago. He is now certified in pastoral care ministry and is a pastoral visitor to the homebound and sick in his parish. Kurpita said Sister Pat had much to do with how involved he is today.

“I always had the attitude of what Jesus said during the Eucharistic feast, ‘Do this in memory of me,’” Kurpita said. “You have to do what Jesus did.”

Kurpita said he was honored by the “very wonderful” award he was presented with from his parish. He said he thanked the parish and then told them the stories about how Sister Pat would encourage him to get involved in his parish.

“Besides, I went to parochial school and I just can’t say no to a nun,” Kurpita said.